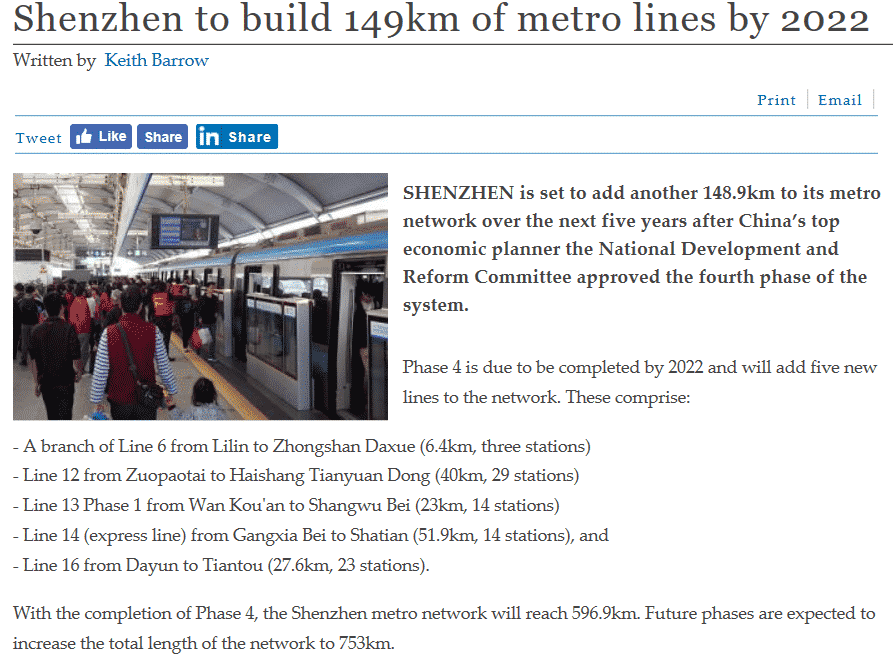 Day after day, week after week, citizens of China see headlines like this (in Mandarin of course), touting China’s never-in-human-history, record setting achievements, development and progress. The above article explains how Shenzhen is starting construction on five new urban metro lines, to be completed in five years. They just opened three others a year ago, with one having a station right near where we live. Everywhere I go in China, highways, bridges, subways, trolleys, trams, bus systems and high-speed railways are being expanded and built. We are spoiled rotten in communist-socialist China.

In addition to checking out my daily palette of Western sources, which decidedly does not include BBC, NPR, NYT, et al., I love to follow Chinese media too. I check out three sites every day. People’s Daily (http://en.people.cn/) and Global Times (http://www.globaltimes.cn/) are national venues. I also pick up a paper copy of the Shenzhen Daily (http://www.szdaily.com/) every morning. There’s nothing like holding a broadsheet in your hands, over a cup of tea or coffee. A computer monitor just can’t compare!

What’s great about all the English newspapers in China is that they are tied to local Chinese ones. Thus, 90% of the content is the same thing as their fraternal Mandarin versions, which saves me a lot of time translating, to keep China Rising Radio Sinoland humming. I also check out the media in Chinese, but most of the time, the English versions do a great job. Often, the headlines and articles are identical.

I have always felt it very beneficial to take the time to read a locale’s newspapers. They truly are a window into how the place is governed, who counts and who doesn’t. When I traveled and worked all over Africa and Middle East, 1980-1990, I would regularly peruse newspapers in English, Arabic and French. It was always fascinating and informative. If I was really swamped, I would at least take the time to study the headlines. They can really be a barometer of local society, economy and government.

Reading the headlines and articles of the Shenzhen Daily is equally revealing. After a couple of months of keeping track of the headlines pertaining to the city’s and country’s development, common themes coalesce. On its front page, there is a lead article below the fold. The paper loves to put a big photo above the fold, which may or may not be related to the lead article. I have sporadically saved a pile of them over the last couple of months. Below are some frontpage headlines of articles, leaving out ones that remark on serious events around the world, like disasters, geopolitics and the like. As I have asked myself for years, living, working and traveling around the world, what kind of image does this selection of headlines evoke in your mind?

Do you see what I see in all these headlines? Any common themes? Threads? I see three.

First is China’s democracy in action. Articles routinely discuss how the public, all the people, from every walk of life can have input, give suggestions and make criticisms of issues in their neighborhood and city. Headlines like Shared Bike Deposit Issues Raised at Hearing; Hearing on Hong Kong-Zhuhai-Macao Bridge Toll to Be Held; Economic Policy for 2018 in the Pipeline as Key Meeting Opens; and Framework Plan for Xiongan Deliberated all demonstrate this. While not seen in the above articles, others recently talked about public hearings for ticket pricing in Trip from Futian (Shenzhen) to Hong Kong via Hi-Speed Rail to Cost HK$80. Public meetings and consultations are a fact of democratic life in China and citizens routinely speak their mind, across many venues and platforms. Now, every city like Shenzhen has phone apps for most or all of the departments which routinely interface with the people, where you can lodge complaints and concerns in a matter of seconds.

This worked for me. On the two-lane street below where we live, there was a low barrier running the whole length, so if a car stopped, no one could go around and pass. The low barrier was meant to protect children coming out of our school, but it was an unworkable nightmare. Tenants in two wealthy high rises across the street from us would have their chauffeurs come park outside, to wait for them to come downstairs to go to work. Mercedes, BMWs, Audis, Cadillacs, Range Rovers and even Maseratis, Ferraris and Lamborghinis would lord it over the blocked street, pissing everybody off in the process. Other less than considerate citizens would stop to run get a takeaway meal from sidewalk stands, or make a fleet footed purchase in the superette. With traffic quickly backing up, exasperated drivers would start to lay on their horns, until it was a nearly 24-hour a day, ear splitting headache for us living right above.

I took several photos with my phone, sent them to the Shenzhen traffic control department, using its phone app and explained in Chinese what was going on. I made sure to tell them about the class conflict problem of rich fucks being totally arrogant and disrespectful of everybody else of more modest means in the neighborhood.

That was in May 2017. When we came back in August from the United States, after summer break (http://chinarising.puntopress.com/2017/08/26/china-is-the-most-plugged-in-big-economy-in-the-world-china-rising-radio-sinoland-170824/), the barrier was removed and the round the clock cacophony of overpriced car horns had disappeared.

Did my complaint to the traffic control department do the trick, or add to the cause of others doing the same thing? I’ll never know, but the street is obscure at best and the authorities would never have known about the class versus class impasse, without people speaking up, including me.

How many media headlines do you see in your city, that have a similar vision of shared prosperity? How many articles are as pervasive in conveying a positive outlook about where your country is heading into the future? When I was back in the United States last year, I sure didn’t see many. In fact, it was downright depressing (http://chinarising.puntopress.com/2017/08/26/china-is-the-most-plugged-in-big-economy-in-the-world-china-rising-radio-sinoland-170824/). You only have to look over this graph to see that communist-socialist China has the world’s best participatory democracy, best leadership and some of the lowest corruption. Pew Trust is a Western polling company, not Chinese, so we can take to the bank the above as unbiased proof: Baba Beijing has stratospheric popularity levels among its people, going back over a decade for very valid reasons.

One thought on “Headlines say it all. Baba Beijing’s vision leads its citizens into the 21st century. China Rising Radio Sinoland 180121”