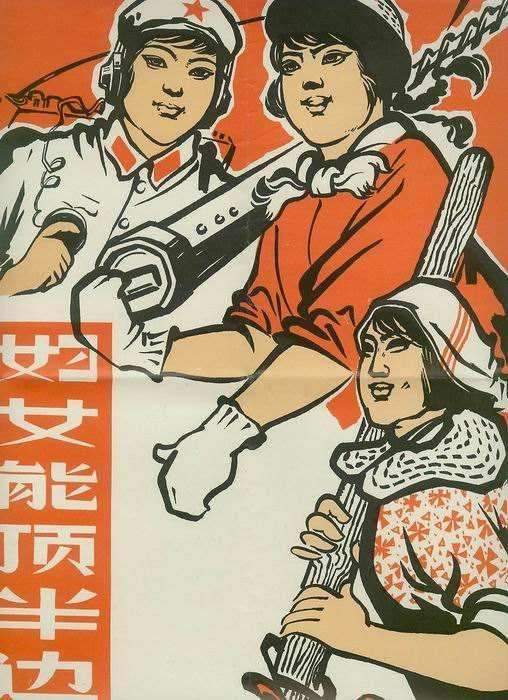 Pictured above: circa 1950s poster showing women doing traditional men’s work, with Mao’s famous declaration, “Women hold up half the sky.” The style is interesting, because the painting is done like Chinese cut paper or a woodcut, to give it a classic feel. If you read Chinese, you will notice the word for “sky” is cut off at the bottom.

During China’s 1930s-1940s civil war, when the communists were kicking out the fascist KMT and Japanese, along with all the Western colonial parasites, Mao Zedong told his cabinet that he was serious about making New China’s first legislation a women’s liberation law. They thought he was joking. Mao wasn’t kidding. He was earnestly sincere and it passed in May, 1950.

Entitled the Marriage Law of 1950, it stated that Chinese women were men’s equals in marriage, divorce, banking, property and business ownership, education, control over their bodies, birth control and professional and working status (http://www.womenofchina.cn/womenofchina/html1/special/13/6131-1.htm). Feet binding, prostitution, concubinage, child labor and the sale of children (largely due to the United States and Britain addicting 25% of the people to opium and morphine until 1949) were banned and successfully enforced after liberation in 1949. Further and successfully enforced bans on gambling, organized crime, usury and loan sharking also helped women immensely in striving for equality and economic independence.

In 1950, China had a population of 500 million. That means overnight, Mao’s sincere interest in helping the communist revolution, by liberating 250 million females and today, 700 million Chinese women, makes him the greatest women’s liberator in human history.

During his childhood and adolescence, Mao saw the plight of rural women, where he grew up in Hunan Province. He saw that country women had no rights, no voice in their finances and marriages and were treated worse than chattel property, like farm animals. Greedy capitalists would buy and sell girls with impunity. Due to all the Western drug addition, prostitution was rife.

Mao was laughed at by Joseph Stalin and just about every other Marxist-Leninist worth their salt, when in the early 1930s, he proclaimed that China’s communist revolution would win among the uneducated, uncouth peasants, not among the urban blue- and white-collar workers, per the textbook theory. His vision to victory became known as Maoism, or Mao Thought, another school in communism-socialism.

Women hold up half the sky （妇女能顶半边天）

Mao’s communist revolution coalesced in north-central Yan’an in the 1930s, then slowly began to push back the fascist KMT, Japanese and Westerners, sweeping towards the south to Beijing, Shanghai, Chongqing and Guangzhou, until New China was fully liberated in 1949. He understood that by getting half the sky out of the kitchen and into schools, workshops, factories and in the (then) peasant People’s Liberation Army (PLA), he could beat these invaders and free China from one-hundred years of imperial humiliation, subjugation and exploitation. He knew that without the Yin half of the sky’s contribution to socialism, he could not succeed in realizing his dreams for the masses.

The rest is history. Chinese women play equal roles in education, science, medicine, law, manufacturing, business ownership, service and government jobs, financing and property ownership. Most of them tacitly understand that without Mao Zedong’s visionary socialist dream for his people, by putting women’s rights first, they would not be where they are today.

As in every other country around the world, Chinese women still live in a patriarchal society. Women make up over one-third of the National People’s Congress (NPC) and the Chinese People’s Political Consultative Conference (CPPCC), better than most Western nations (https://www.theguardian.com/women-in-leadership/2013/sep/25/china-uk-female-senior-managers-study). China’s local representatives are voted on by secret ballot among all adult citizens. Women make up almost half of the positions. But, moving up the power ladder to county, province and national levels, no woman has gotten higher in the central government than Vice-Premier and the Central Committee, the latter which pulls together the country’s 300 top leaders (https://www.telegraph.co.uk/news/worldnews/asia/china/9934666/China-appoints-a-woman-to-one-of-highest-positions.html and http://www.chinadaily.com.cn/en/doc/2003-08/14/content_254883.htm). President Xi is including expanding women’s roles in Chinese government and society into his platform for reforms (http://www.xinhuanet.com/english/2015-09/28/c_134665280.htm). And just like everywhere else it seems, sexual harassment continues to be a problem, from the metro lines to the office. However, the kind of grotesque violence we see in today’s India and other countries around the world, is unimaginable in China.

Looking back at China’s communist-socialist development, since 1949, Chinese women can take great pride in their accomplishments. As the citizens strive to achieve the Chinese Dream of a moderately prosperous socialist economy by 2020, and then a wealthy one by 2049, in order to transition into a rich, technologically advanced communist society, it will not be done without the equal participation of Chinese women in realizing these goals – holding up their half of the sky. Shown above, Mao’s famous saying in support of females, “Women hold up half the sky,” read top to bottom, right to left, in the classic style. The first two columns on the right are his saying, the third column from the right is his signature and the fourth column from the right is the artist’s signature, who did a great job of imitating Mao’s instantly recognizable calligraphic style. This artist included his seal, in green, below his signature, to make sure no one would think it was a Mao original. Mao was probably one of the most well read and educated world leaders of the 20th century. He was also an outstanding poet and calligrapher, the latter who is considered just as much of an artist in Chinese culture, as a painter or sculptor.