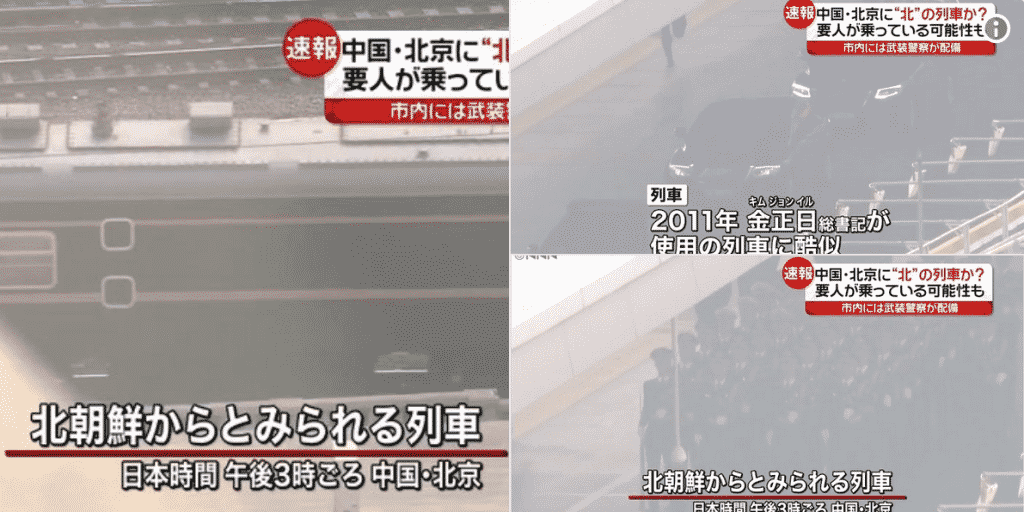 Pictured above: from Japanese television, a CCTV shot of Kim’s train in a Beijing station on the left. On the right is the honor guard and motorcade greeting him upon arrival. This is a really BIG deal (now confirmed – see postscript).

Given the proposed summit between Kim and US President Donald Trump, this is momentous. Why? Because since both gaining their national leadership positions in 2012, Kim and Chinese President Xi Jinping have never met.

My conjecture is that Xi will propose to host the DPRK-USA summit in China. Outside of Russia, China is a safe place for Kim to travel and not worry about CIA-MI6-DGSE-BND assassins trying to poison him with plutonium, create an “unfortunate” accident, a mysterious heart attack, etc. They would do it without hesitation, if they could.

This is surely why speculation that the summit might take place in Sweden was scotched by DPRK, since Stockholm is a loyal whore for Western empire (https://nypost.com/2018/03/15/north-koreas-visit-to-sweden-could-be-first-step-in-trump-kim-meeting/), as Julian Assange’s illegal imprisonment shows (http://www.wsws.org/en/articles/2018/02/13/assa-f13.html).

In any event, this is great news and will be a big push in the right direction for the Kim-Trump summit to be realized. The real rulers of the West, the deep state masters are foaming at the mouth about any possible détente on the Peninsula, risking billions of dollars of military hardware, missile and nuclear bomb sales, and not having 30,000 US soldiers camped 300km from communist China’s border.

Postscript: it’s official. It was Kim Jong-Un who came to Beijing. He wasn’t there to eat fried rice and dumplings. It will be interesting how it all shakes out in the next week or so, with the pending Kim-Trump summit in the works.