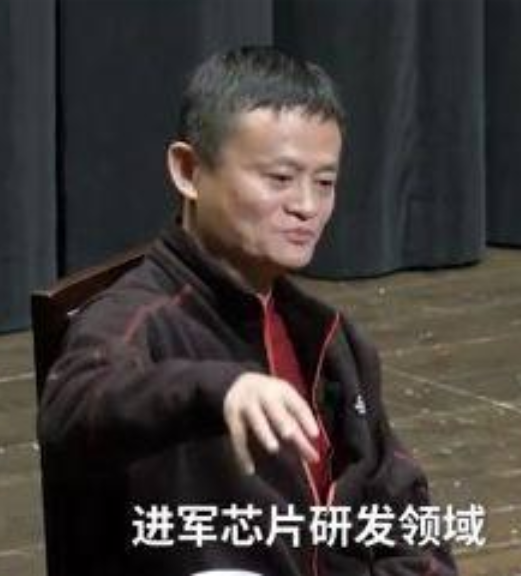 Pictured above: Ma “Jack” Yun, CEO of Alibaba at a recent microchip conference. The Chinese captions says, “(Time to) push the microchip R&D domain”. Yeah, like China’s gonna push it right down Uncle Sam’s throat with the right fist and way up his backside with the left fist, no smile, no gloating. Business is business, right? It’s called war.

[dropcap] T [/dropcap]his article is one of hundreds circulating all over China’s media, probably thousands down to the provincial and city newspaper level, exhorting the people to stand up and support their nation in its war against the United States. As the translated article below says, Fate of the nation, everyone is responsible!

You will be hearing more about BAT, the acronym for China’s three big tech companies, Baidu, Alibaba and Tencent. Tencent is the world’s tenth largest corporation. All three are mofo rich, mofo successful (https://www.cnbc.com/2018/05/04/alibaba-beats-sales-forecasts-on-strong-commerce-growth.html), mofo innovative, move at lightning speed in the market and are mofo motivated to work cooperatively to take down Uncle Sam. They are communist-socialist corporations, against which Western capitalist companies simply cannot compete (http://chinarising.puntopress.com/2017/10/25/how-can-western-capitalism-beat-this-thats-the-rub-it-cant-china-rising-radio-sinoland-171022/). I can guarantee you that Baba Beijing (China’s leadership) is meeting with all three of these tech behemoths individually and collectively, at the highest levels, as well as with scores of others, telling them,

What do you need? We want China to be mass-production microchip independent by 2020, 2025 at the very latest. Tell us how we can help. Laws, budgets, you name it. We are in this together. United we stand, divided we fall. This is war and nothing short of total victory is acceptable.

Just yesterday was the 99th anniversary of the May Fourth Movement. On May 4th, 1919, the Chinese masses erupted in vehement indignation against the humiliation of World War One’s Eurangloland Treaty of Versailles, which “gave” Shandong Province to the fascist, colonial Japanese, instead of returning it back to Chinese sovereignty. The lies, deceit and treachery of the West towards China was boldfaced and revolting. Two years later, the Communist Party of China was founded and there was no turning back on destroying Western, Japanese and Chinese fascists, with final liberation in 1949.

I wrote about this whole fascinating period in Book #3 of The China Trilogy (http://chinarising.puntopress.com/2017/05/19/the-china-trilogy/), China Is Communist Dammit – Dawn of the Red Dynasty (https://www.amazon.com/China-Communist-Dammit-Dawn-Dynasty/dp/6027354380/). It makes for gripping reading.

In reviewing the Chinese press, I can feel a similar May 4th Movement,

Enough is enough, we aren’t going to stand for it anymore!

As happened almost 100 years ago all across China. War has been declared against the imperialists, again.

Note: Mr. Ma “Jack” Yun is the founder and CEO of Alibaba. The date of the conference mentioned is not clear, but it evidently happened the last week of April 2018. I highlighted below the most telling parts of this translated Chinese article and [bracketed] interpretations of some statements.

For Trump! Today, Ma Yun gave the most powerful counterattack!


Fate of the nation, everyone is responsible! For a long time, Ma Yun, who had no major movements, suddenly became extremely active since the United States attempted to launch a trade war!

Just after these words fell, Ma Yun responded with toughness. If Trump wanted to go against him, he would go it alone. Your previous commitment to “create millions of jobs for the United States” will be abolished [right after Trump got elected, he met with Jack Ma, who offered to help create a million jobs in the United States’ heartland: http://chinarising.puntopress.com/2017/01/14/who-you-gonna-call-mr-trump-taiwans-tsai-or-alibabas-jack-ma-jeff-j-brown-china-rising-radio-sinoland-on-press-tv-170114/]!

On April 17th, the war escalated again, and the United States officially put a hit on ZTE (http://chinarising.puntopress.com/2018/04/25/baba-beijing-is-going-to-shove-zte-way-up-uncle-sams-backside-china-rising-radio-sinoland-180425/). An attempt to encircle China’s science and technology leaders through the chip field!

At the same moment, Ma Yun officially announced the acquisition of Zhongtian Micro. This is the only chip company in Mainland China that can currently achieve autonomously embedded chips.

At the same time, Alibaba officially announced the first self-developed neural network chip – Ali-NPU! The performance of this chip is 10 times that of the mainstream CPU and GPU architecture AI chips on the market, and the manufacturing cost and power consumption are only half.


Long ago, Alibaba entered a large-scale entry into the chip field. Zhongtianwei is only one of the chip companies acquired by Alibaba. In addition, Alibaba has already set up five or six chip companies.

Today, Trump’s outburst will only increase Alibaba’s investment in the chip field [and the whole country, including the government]!

From warning to action, Ma Yun has started a full counterattack! Obviously, Ma Yun has no illusions about Trump. He is very clear that fair trade is simply not practical for the overbearing United States.

At a recent conference, Ma Yun’s remarks were even more intense! Ma Yun stressed: We are not developing chips for the sake of competition. We must use chips inclusively to help more young people and help more weak countries (http://chinarising.puntopress.com/2017/12/07/jack-ma-is-a-communist-capitalist-jesus-was-a-communist-socialist-china-rising-radio-sinoland-171207/)!

The same chips, but not the same philosophy! The United States regards chip technology as a means of restraining other countries, and Chinese entrepreneurs let chip technology truly benefit and help the world!

I don’t know what the United States, which uses chips to make a huge profit, would like to think after hearing these words! But one thing I know is that once Alibaba has made progress in the field of chips, the extremely chip-reliable field in the United States will suffer!

Holding huge profits, but also shouting grievances, extremely ridiculous! Do not want to trade well, then just look at who is better! Today, Ma Yun officially launched a full-scale counterattack to the United States!

If you think that only Alibaba has launched a counterattack, it would be a big mistake! The other two of BAT, Tencent and Baidu have already been laid out! Note: BAT (Baidu-Alibaba-Tencent) microchip field. Blue entities are alliances, orange companies are investments and brown ones are internal research companies. Tencent is the 10th biggest company in the world, quite a bit bigger than Baidu and Alibaba and this chart does not do it justice (http://chinarising.puntopress.com/2017/11/30/do-you-see-what-i-see-depends-on-where-you-look-china-rising-radio-sinoland-171130/).

When Trump prevented Alibaba from buying US MoneyGram, Ma Yun left no response and turned away!
When the United States sanctions in every possible way and cut off Huawei’s sales channels in the United States, Huawei announced that it will fully withdraw from the US market [Huawei is the world’s fourth biggest mobile phone manufacturer – I own a Huawei!].

When dozens of African presidents compete to meet Ma Yun! When all of Europe chooses to embrace Huawei, embrace BYD [the Shenzhen based e-vehicle company and one of the world’s biggest]! They are fully aware that these Chinese companies are bringing about win-win cooperation and driving development; they are not superior to others and putting on pressure [to change their ways of life]!

It never rains, it pours! China’s revenge has only just begun! After the storm, it is a rainbow!

Source
This article only represents the author’s point of view and does not represent Baidu’s position. The author authorizes Baijiahao to publish it and it may not be reproduced without permission.

Postscript: nice article about how Alibaba and Tenent are kicking butt and taking names, not just in China, but more and more around the world. The article is from a Hollywood institution, Variety magazine, which is telling (http://variety.com/2018/biz/asia/alibaba-tencent-china-1202795583/)