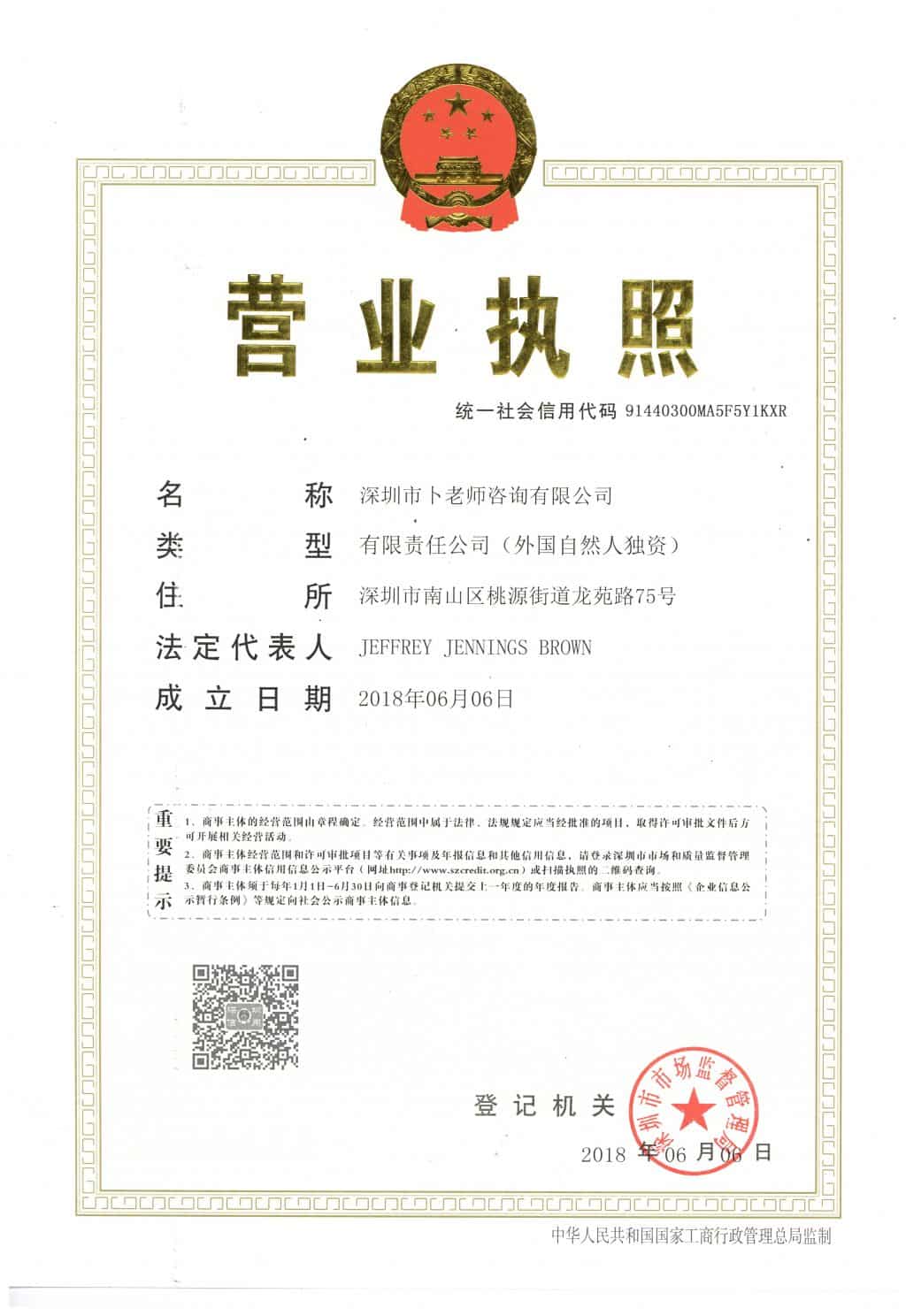 Pictured above: Our new Chinese business license for “Shenzhen Professor Brown Consulting, LLC”, founded on June 6th, 2018. I am listed as the legal representative and the long registration number up top is our Social Credit Score ID. The QR code below lets any Chinese citizen see all the details about our business and shows our score, 0-800.

I said the best part about CSCS is that companies, their owners and officers have much more to fear than the average citizen. My wife’s and my new Chinese LLC business license is pictured above. That long number, 91440300MA5F5Y1KXR is our Social Credit registration code for all of China. Anybody who scans the QR code or types in the company name will get all the info about our company, the good, the bad and the ugly. In China, you can access any company’s social credit score, Chinese and foreign owned, to see how it conducts its business, giving it a score of 0-800.

As of yet, you need a Chinese ID to do so, but any citizen can go online for free and get a complete CSCS report on any company, including,

Where is it located?
Who is the legal representative who answers for all these results?
How much revenue is it declaring?
Is it filing its taxes every year?
How much taxes is it paying?
How many Chinese and foreign workers does it have?
Do the foreigners have legal work permits?
Etc.

I have already had to submit all this to various Chinese authorities and when we file our first tax returns, this information will get filled in.

While I cannot do it yet, because I do not have a Chinese national ID, any Chinese citizen can scan this QR code and make a complaint about said company, for a nominal fee of about $/€5. They can pay on their phone in thirty seconds using Wechat or Alipay. Now, this aggrieved person is on the hook for their social credit score (SCS). Are they telling the truth or are they a serial crank who just likes to feel important? Two or three legitimate complaints about this person, their SCS is going in the shitter and nobody will take them seriously anymore.

Talk about transparency and accountability!

Thus, we have news in the Chinese press that shatters all the BLPM garbage about the CSCS. This week, Leshi Information Technology, an internet company, saw its SCS get justifiably tarred and feathered, for not paying its debts (http://www.globaltimes.cn/content/1120206.shtml). The article in English is short and worth including here,

Troubled internet company Leshi Information Technology saw its stock drop more than 6 percent during the Tuesday trading session in the Shenzhen stock market after reports arose that the company has fallen onto the “dishonest persons list.”

A statement by the company issued on Monday night revealed that due to problems in paying back debt incurred by the company, the Beijing No.3 Intermediate People’s Court and the Beijing Chaoyang District Court ordered Leshi to be listed on the “List of Dishonest Persons Subject to Enforcement,” based on six open cases against the company.

The company’s founder Jia Yueting was himself listed on the “Severely Dishonest Persons List” in June along with his sister. People listed are restricted from purchasing airline or high-speed train tickets in China.

Leshi also issued a statement on Tuesday announcing a contractual conflict with a Chongqing-based fund, which argues Leshi has a contractual obligation to repurchase its shares sold to the fund for 1 billion yuan ($146 million) plus 15 percent in annual interest. Leshi argues in the statement that the validity of the contract is still being questioned and the company will fight the allegations.

As it turns out, Leshi borrowed money from the semi-legal shadow banking sector, at 15% interest, while current commercial loans from legitimate banks are a fraction of this. That’s like junk bonds. If a company is so desperate as to borrow at such a high interest rate, the public has a right to know about the situation, as it is not a sign of a well-managed company.

Thus, once the truth came out via the CSCS, Leshi’s stock price took a deserved dive. Now, the whole world is watching, the CEO and officers are on public hotseats, answerable to 1.4 billion citizens, and not just the bottom feeding stock buying suckers, while the preferred- and stock-option sugar daddies stay protected.

Is our new company Professor Brown going to file its taxes honestly? You betcha! Are my wife and going to properly file each year for our foreign work permits and residence cards? Of course! Are we going to make a sincere effort to integrate ourselves into the local community and be good neighbors? Absolutely!

For all of the above, we would do so anyway, which is to our benefit, since the CSCS’s goal is to offer lots of incentives (preferred loans, reservations, freebies, subsidies, etc.) and only resort to punishment, when legitimate complaints roll in.

Talk about transparency and accountability!

Meanwhile, in capitalist economies, the 1% are robbing the 99% blind, with arrogant impunity, and it just keeps getting worse and worse by the day.