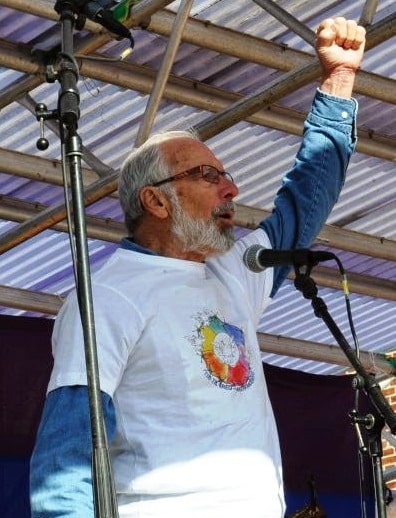 Pictured above: Ron Ridenour at a 2015 Danish antiwar demonstration. His life has been one of constant struggle against Western empire, fighting for social justice and equality for humanity’s 99%.

Please join me today in talking with Mr. Ron Ridenour, a world citizen who has spent his adult life in the metaphorical trenches, giving the good fight to Eurangloland’s elite owners and their mainstream media Big Lie Propaganda Machine. Our discussion centers around the publication of his latest book, The Russian Peace Threat: Pentagon on Alert!, which is linked at the end of this post. Like me, you will be glad you read it.

Ron was born in the Military Empire, Ron Ridenour rejected the American Dream, in 1961, and has since acted as an anti-war, solidarity, and radical activist. He has lived in many countries and worked as a journalist-editor-author-translator for four decades, including for Cuba’s Editorial José Martí and Prensa Latina (1988-96). He has published six books about Cuba (“Backfire: The CIA’s Biggest Burn” and “Cuba at Sea”), plus “The Russian Peace Threat: Pentagon on Alert”, “Yankee Sandinistas”, “Sounds of Venezuela”, and “Tamil Nation in Sri Lanka”.

The above is Ron’s short introduction. I really recommend reading his anti-imperial “CV” below, as he should be an inspiration to anyone who wants to work for a more just, equitable and peaceful world. Humankind is lucky to have him and we need a few million more who are just as proactive. 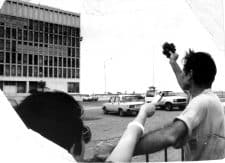 Pictured above, Ron burning up his American passport in front of its Havana, Cuba interest section, in 1991, to protect the beginning of Eurangloland’s long occupation and genocide in Iraq, still ongoing.

Born in the “devil’s own country” of a WASP military family, 1939. Growing up, I experienced the pains and indignities of US imperial domination, its jingoistic wars, its chauvinism and racism at home and abroad.

Before I understood the essence of US imperialism, I joined the US Air Force, at 17 when the Soviet Union occupied Hungary in 1956. Aching to fight the “commies”, I was posted to a radar site in Japan where I witnessed approved segregated barracks in the Yankee base, and the imposition of racism in Japanese establishments. I protested and was tortured by my white “compatriots”, who held me down naked, sprayed DDT aflame over my pubis, and then held me under suffocating snow. This, and the fact that we had orders to shoot down any Soviet aircraft over “our” territory in Japan—which never appeared—while we flew spy planes over the Soviet Union daily, led me to question American “morality”.

In shame and anger at what the US really does against peoples at home and around the globe, I took responsibility. My first demonstration was in Los Angeles against the April 1961 Bay of Pigs invasion. The Cuban revolution inspired me to become an activist, and I helped build the budding student and anti-war movements just forming when I entered college, as well as participating in the civil rights movement. I was an activist during the 1964 Mississippi Freedom Summer campaign to force the state to allow black people simply the right to vote. I later supported the Black Panther Party, and supported other liberation movements inside the monster. I was part of the Wounded Knee occupation by Native Americans (1974) for a time and helped with media promotion.

During the 1960s and 70s, I was jailed a dozen times for activism, once for half-a-year, and spent a week in a Costa Rica prison for trying to travel to Cuba during the October 1962 missile crisis.

I began working as a reporter in 1967. I was fired from three dailies (Hanford Sentinel, Riverside Press-Enterprise, Hollywood Reporter) for failing to self-censor my reportage and for union organizing efforts, as well as support for the Black Panthers. In the early 1970s, I reported for and edited several alternative “underground” weeklies, including the “Los Angeles Free Press” and the “L.A. Vanguard”.

FBI, CIA, Los Angeles Police Department’s red squad all tailed and harassed me, even to the point of forging tax return papers in an attempt to show the left and anti-war movement that I was one of their many infiltrating spies.

In 1980, I moved to Denmark for love of a Danish woman. Between 1982 and 1996, I traveled to and lived for nearly nine years in Nicaragua and Cuba. I translated, wrote and edited for Cuba’s foreign publishing house, Editorial José Martí, and Cuba’s news agency, Prensa Latina. I have also traveled in Venezuela and Bolivia and written about their revolutions.

I have been a special correspondent or freelance for many publications in the US, several Latin American and European countries—among them: The Morning Star, New Statesman, The Guardian (US and England), Playboy, Liberation News Service, Pacific News Service, Pacifica Radio, Coast, Qui, Skeptic, Sevendays…”

I have also written for many Danish publications–Copenhagen weekly Politisk Review weekly, Relief, Information–as well as working in ecological agricultural, lecturing in schools, painting houses and other odd jobs. I have been an anti-war activist and have acted in solidarity with the resistance movements in Iraq, Afghanistan, Colombia and Palestine.

My published books are: