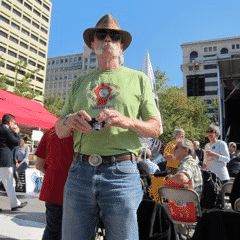 Pictured above: Paul Edwards at a public protest in the United States.


Thanks to Patrice Greanville, I learned about Paul’s work, when he posted on The Greanville Post (www.greanvillepost.com) his recent article about the grizzly bears in Yellowstone National Park (https://www.greanvillepost.com/2018/10/02/the-canary-in-our-coal-mine/). I reached out to Paul and he kindly agreed to be on my show. 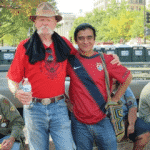 Paul Edwards with a fellow protestor

Paul Edwards is a writer and filmmaker based in Montana, USA.

He can be reached at:

Last year, The Greanville Post announced his channel to its fans:

Paul’s life story is worthy of a biography: a rebel youth growing up, traveling and working around the world and then a long career as a Hollywood writer. Through it all, he has never lost his lifelong wrath against US imperialism and global capitalism, while seeking social and economic justice for humanity’s 99%. Our discussion makes for a great interview, one that you don’t want to miss.

One thought on “Paul Edwards and his amazing lifetime of rebellion, on China Rising Radio Sinoland 181116”