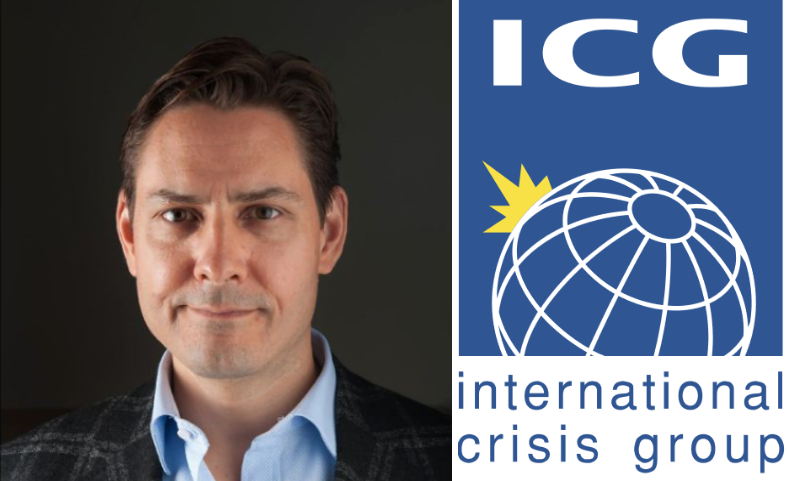 Pictured above: left, behind Michael Kovrig’s cute, pixie smile is the mask of a cold, calculating spy. Right, ICG is a mercenary Soros-CIA front, that has caused the death and suffering of millions of innocents across the globe.

Western media went ballistic when a Canadian was recently arrested in China. Mr. Michael Kovrig was taken into custody, has only been allowed limited access to the Canadian embassy and has not been permitted to see a lawyer, so naturally, non-Chinese pundits were aghast at Mr. Kovrig’s “inhumane” treatment (https://news.mb.com.ph/2018/12/22/canadian-ex-diplomat-held-in-china-denied-access-to-lawyers-icg/).  He was taken in China on December 10, right on the heel of Huawei’s CFO, Ms. Meng Wanzhou, being arrested on December 1, by the Canadian government, while in transit at Vancouver’s airport, to be extradited to the US, which I just reported on (https://chinarising.puntopress.com/2018/12/19/us-trying-to-sabotage-huawei-zte-and-sino-5g-too-late-game-over-china-rising-radio-sinoland-181219/). This for phony charges of circumventing America’s unitary sanctions against Iran, that even the Canadians do not recognize, but never mind (http://chinaplus.cri.cn/news/china/9/20181213/222615.html). Canada is an overweening, obsequious Yankee finger puppet, like the EU, so we cannot expect much else.

Kovrig’s arrest looks like a simple case of quid pro quo for Meng, but the fact of the matter is he is a spy. I can say that with complete confidence, because he is an employee of ICG, the International Crisis Group. ICG is one of George Soros’ many front organizations under his Open Society Foundations, and every one of them is a color revolution creation machine, hellbent on destroying the way of life of any country that is not a resource whore for Western capitalism. Behind all their slick, lefty-liberal propaganda (https://www.crisisgroup.org/asia/north-east-asia/china), this is what they do.

ICG is not a “think tank that analyzes conflicts and geopolitical flashpoints”. It is a CIA front that causes conflicts and geopolitical flashpoints. It is not “an independent organisation working to prevent wars and shape policies that will build a more peaceful world”. That is pure propaganda deflection. ICG exists to foment wars and subvert anti-imperial, socialist-communist countries’ ways of life, to install puppet sluts in service to NATO and global capitalism.

In the last few years, George Soros has reported given ICG at least $5 million. USAID, a well-known public CIA front, has donated, as well as the oil trillionaire Rockefeller, Stanley and Carnegie families. Another well-known CIA-front, the Ford Foundation has ponied up. Petroleum giants Chevron, Shell, ExxonMobil, Conoco-Phillips, ENI and British Petroleum don’t donate to ICG out of the goodness of their sweet little Christian hearts. Nor do mining conglomerates Anglo-American and BHP Billiton.

Other “altruistic do-gooders” like the money-laundering Royal Bank of Scotland have also paid to play. Then, throw in some of postwar’s greatest color revolution zealots and their organizations. This includes socialism-communism-Russia-China-Iran-Venezuela hating Zbigniew Brzezinski of White House/US Department of State fame; Wesley Clark, former NATO Supreme Allied Commander; and Stanley Fischer, Vice-Chairman, Citigroup Inc. and former First Deputy Managing Director of International Monetary Fund (IMF), and you can clearly see that the vile, evil fruit of global rape-and-plunder capitalism falls at the foot of the poisonous ICG vine.

The fact that Michael Kovrig is a former Canadian diplomat does not mitigate why Baba Beijing has arrested him for “engaging in activities endangering national security”, which is diplomatic politesse for espionage. When I worked in Algeria, 1985-1990, I had an official US passport and worked under the aegis of the embassy there. Everyone there knew who the official, registered CIA and DIA (Defense Intelligence Agency) diplomats were, the ones recognized by the Algerian government. This is standard operating procedure across the diplomatic world.

It is also accepted that embassies and spydom have non-official covers (NOCs), who are other members of the embassy, business people, church officials and often from among thousands of non-governmental organization (NGO) representatives, who are tasked by the West’s alphabet soup of spy agencies to provide in-field information, reconnaissance and help recruit local and international agents “for the cause”. They are paid cash, given special favors like travel junkets, access to VIPs and personages, gigs in the mainstream media, etc., while others do it out of their misguided sense of patriotism. Some get caught, arrested, imprisoned or evicted from the country. NGOs get closed and countries like China pass strict laws to control them, something I’ve explained in detail (https://chinarising.puntopress.com/2016/04/30/baba-beijing-lowers-the-communist-boom-on-foreign-ngos-china-rising-radio-sinoland-16-4-30/). All countries engage in this kind of declared and illicit espionage. It’s been going on for thousands of years.

Funnily, rumors were rife at the embassy in Algiers that I was a NOC, since I was a really good friend of the ambassador, was fluent in Arabic and traveled all over the region for my work. It’s true, I did fit the NOC profile, but I never offered my services, nor was I ever approached by “the gang”. They probably knew me well enough not to waste their time getting declined.

I’ve met many NOCs in my travels around Africa, Asia and the Middle East. They don’t brag about it, but you can pick them out. I remember an American physician in Beijing, who treated our daughter. He spent years in the celebrated NGO, Doctors without Borders. All the countries he told me he went to were those overthrown by the West or under imperial assault. He fit the MO perfectly. I had to smile, because he even was a caricature of the hard drinking, hard living, gruff, take-no-prisoners badass.

Well-intentioned NGOs like this one, Red Cross, International Volunteer Services (IVS), etc., pay lip service that they “vet” employees/workers for being NOCs, but it’s not like these folks are running around with a, “Look, I’m a spy!” badge on their jackets. Unless they’ve been caught, outed and it becomes known in NGO circles, they continue to fill the ranks of “noble” NGOs around the planet. Why? They make wonderful spooks, because they are out in “enemy territory”, on the ground and can funnel all kinds of valuable information to organizations like the CIA/DIA/NSA (US), MI6/MI5 (UK), DGSE (France) and BND (Germany), to improve their color revolution and sabotage operations. They must be in psychiatry’s psychopathic spectrum, because millions of innocents die every year as a result of their undercover deeds. All in a day’s work whoring for imperial capitalism.

Thus, we see the exaggerated “shock” in the foghorn of mainstream Western propaganda that, “Kovrig’s arrest is unjustified… We call for him to be released immediately, and at a minimum for him to be allowed regular consular access, contact with his family and to see his legal counsel… He must be tired and stressed”. This is all derisively laughable, when ICG is a well-known imperial sabotage machine and Kovrig’s MO fits the NOC spy profile to a colonial T. Please don’t try to convince me that Baba Beijing does not know this, replete with names, addresses and phone numbers. China’s spy agency, the Ministry of State Security is hands down one of the best and most credible in the world. If you get arrested by them, there is a 95% chance that they have the goods on you.

Ten to one, Kovrig is going to spend many well-deserved years in a Chinese prison for espionage and for all the blood of the millions of innocents who have suffered and died at the mercenary hands of ICG.