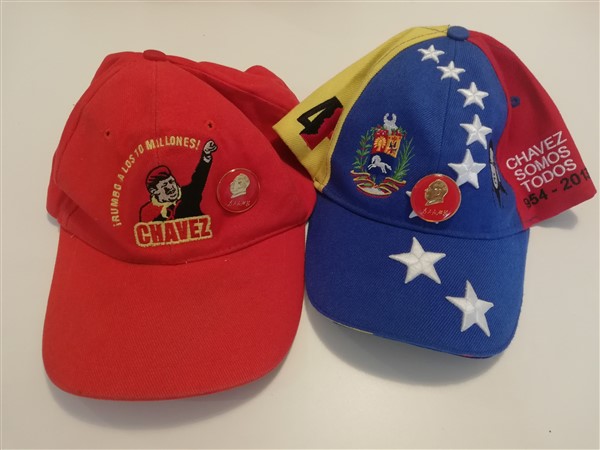 Picture above: two caps I wear celebrating Hugo Chavez and the Bolivarian Revolution, where I also added a Mao Zedong pin that says, “Serve the People” on the front and not visible on the back, “Forever Protect Peace”. Chavistas are inspired by Mao’s sense of socialist service and communist, communal harmony. Nicolas Maduro, President of Venezuela said so during a visit to China, when he visited Mao’s mausoleum (https://www.aljazeera.com/news/2018/09/founder-venezuela-maduro-praises-mao-china-trip-180914144410464.html).

The hat on the left says, “For the 10 million!” If you know what it means in particular, please leave a comment. I’ve never gotten a good answer. The hat on the right is the Venezuelan flag, with Chavez’s portrait. On the left is “4F”, meaning “February 4th“, 1992, the start of the Bolivarian Revolution. On the right, “We are all Chavez, 1954-2013”, his birth and death years. It is widely assumed he was killed by the CIA (https://venezuelanalysis.com/analysis/11890).

Do Americans really want another humiliating loss, like in Korea and Vietnam/Southeast Asia, just south of their border?


Friends, fans and followers of China Rising Radio Sinoland, right now, it’s not China, not Russia, nor Iran that is going to determine how 2019 plays out, but Venezuela. Battered, besieged, blockaded and brutalized by Western imperialism and global capitalism, the proud people of this tenacious and defiant nation just celebrated their 27th anniversary of the Bolivarian Revolution, which started on February 4th, 1992. Ever since then, Eurangloland has spent billions trying to destroy this socialist country and its majority Chavista Movement, named after its founder, Hugo Chavez. As Peter Koenig explains, the imperial playbook being used against Venezuelans is the exact same one that succeeded in Chile, in the early 70s (https://www.greanvillepost.com/2019/01/24/venezuela-an-appeal-to-russia-china-and-all-unaligned-countries-for-support-of-sovereign-venezuela/). It’s not working today, because Chavez and his successor, current Venezuelan President Nicolas Maduro, saw what happened in Santiago and President Salvador Allende 46 years ago, and prepared for the future. Peter knows what he is talking about. He goes to Venezuela for his work and gets out of the capital, Caracas, to see what’s really going on. My interview with him is excellent (http://chinarising.puntopress.com/2018/03/16/around-the-world-with-peter-koenig-on-china-rising-radio-sinoland-180316/).

Realizing how critical Venezuela is to humanity’s future, TGP has run some great articles, along with Mr. Koenig’s above. Use this search string to see them all (https://www.greanvillepost.com/?s=venezuela). I’ve listed a few below:

Gilbert Mercier is a TGP regular and did a great written interview to explain that the US’s desperate battle to destroy Venezuela’s socialist way of life is just a part of the long, continuous plunder of Latin America, using the Monroe Doctrine as a pretext (https://www.greanvillepost.com/2019/02/01/oil-neocons-monroe-doctrine-author-explains-origins-of-trumps-venezuela-plan/).

Dan Cohen and Max Blumenthal wrote and recorded a full exposé on Western propaganda and perfidy in Venezuela and Latin America (https://www.greanvillepost.com/2019/01/30/the-making-of-juan-guaido-how-the-us-regime-change-laboratory-created-venezuelas-coup-leader/).

Rainer Shea gets right to the point about the West’s fear of a formerly resource whore country becoming a successful socialist nation has everything to do with the violent cancer of capitalism  (https://www.greanvillepost.com/2019/02/01/venezuela-coup-attempt-proves-that-capitalism-is-a-cancer-that-survives-through-violence-and-propaganda/).

My comrade-in-arms Andre Vltchek has reported on the ground from many countries, including Venezuela. Here is his passionate defense of the Bolivarian Revolution (https://ahtribune.com/world/americas/venezuela/2825-mobilize-and-defend-venezuela.html).

I’m a huge fan of Pepe Escobar. He has the wonderful ability to contextualize, by standing back and looking at the forest from the trees, and has a wry sense of humor. He meets and talks to many different people for his reports. In this one, he points out that Cuba has 15,000 citizens in Venezuela working to protect the Bolivarian Revolution (https://www.strategic-culture.org/news/2019/02/01/venezuela-lets-cut-to-chase.html ). His pithy comment about the history of Cuba’s global anti-imperial resistance is priceless.

Tony Cartalucci does outstanding research and always backs up his journalism with piles of hyperlinks and references. This one on Venezuela is not exception (https://landdestroyer.blogspot.com/2019/01/us-regime-change-in-venezuela.html). I had the pleasure of interviewing Tony on my show (http://chinarising.puntopress.com/2017/11/01/tony-cartalucci-land-destroyer-talks-about-baba-beijing-on-china-rising-radio-sinoland-171102/).

Dmitri Orlov looks at Venezuela’s unlucky history of having Earth’s largest proven petroleum reserves, plus mountains full of other valuable natural resoureces, in a world destroying itself with capitalism. I was fascinated to read his comments about what a money losing boondoggle the US’s fracking industry has been, $300 billion in the hole and counting (https://cluborlov.blogspot.com/2019/01/why-must-venezuela-be-destroyed.html).

Editor’s note: I just checked The Saker and he did a great written interview with economist Michael Hudson, covering all the background on Venezuela and US imperialism in Latin America (http://thesaker.is/saker-interview-with-michael-hudson-on-venezuela-february-7-2019/). Saker and I have worked together and it’s the best site on the web for news about Russia (http://chinarising.puntopress.com/2015/05/27/interview-on-the-saker-44-days-radio-sinoland-china-xi-russia-putin-india-modi-2015-5-26/). So, this paragraph in not in the SoundCloud and YouTube podcasts…

Why do you need to stop depending on Western mainstream media and its tsunami Big Lie Propaganda Machine (BLPM), and start getting the real truth from all the aforementioned journalists and writers? Media Lens explains, by dissecting how supposedly “liberal” outlets like BBC and the Guardian work hand in glove with their governments and spy agencies to symphonically coordinate their projectile vomit onto the unsuspecting public (http://medialens.org/index.php/alerts/alert-archive/2019/892-venezuela-blitz-part-1-tyrants-don-t-have-free-elections.html).

There are two other news outlets that you should consult about Latin American affairs. For the 24-hour news cycle, check out TeleSUR, which has both English and Spanish content (https://www.telesurenglish.net/). For more detailed analysis from the people on the streets and roads of the country, Venezuela Analysis is indispensable (https://venezuelanalysis.com/).

2 thoughts on “BEST OF THE LEFT: China Rising Radio Sinoland fans, Venezuela is THE story of the new year! Stay informed.”