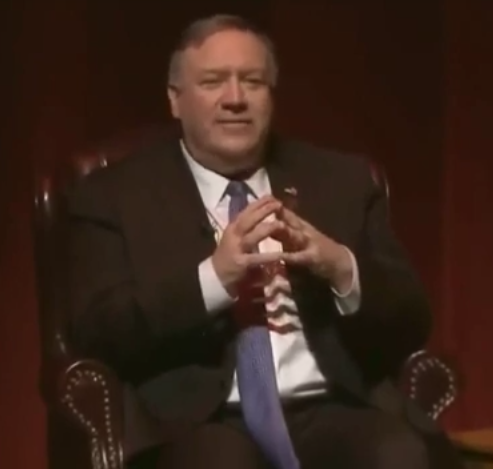 Pictured above: US Secretary of State Mike Pompeo, telling it like it is: lying, cheating and stealing are the glory of the American experiment. It’s what the West does best. He was adored by the audience like a success guru.

Secretary of State Mike Pompeo recently gave a speech at Texas A&M University, a school famous for its love of all things military. It is considered the West Point (US Army Academy) of Texas, glorifying America’s endless terrorism and wars, at home and across the planet. Pompeo is a West Point graduate. Before being US Secretary of State, he was the CIA Director.

Afterward, there was a question and answer session and the last exchange was caught and posted on YouTube. In his answer, he mentioned,

What is the motto for a cadet, “You will not lie, cheat or steal, or tolerate those who do”? I was the CIA Director and we lied, we cheated, we stole – we had entire training courses”!

For that bragging, the Texas A&M Aggies gave him an audience-wide, rousing round of applause.

Then, to look at the big picture surrounding the CIA’s habitual lying, cheating and stealing, Pompeo continued,

It reminds you of the glory of the American experiment.

Which inspired me to write a poem,

It is glorious to

Is the calling of the West

Lying, cheating and stealing are not just the American way of life and conducting business. Predatory, gangster, psychopathic behavior, including extermination, genocide, slavery, war, rape and plunder is how the West has worked since the beginning of its civilization, going back to at least the Ancient Greeks (http://chinarising.puntopress.com/2018/01/06/slavs-and-the-yellow-peril-are-niggers-brutes-and-beasts-in-the-eyes-of-western-empire-china-rising-radio-sinoland/), and more likely back to Mesopotamia and the times of the Old Testament. It’s what we do best. Global colonialism and capitalism are simply evolutionary adaptations of the West’s well-honed modus operandi of millennial death and destruction.

If you are surprised by Mr. Pompeo’s honest admission of how the West cannibalizes humanity and plunders their natural resources around the world, then you need to read The China Trilogy (see below), which is filled with concrete examples juxtaposing the unvarnished, myth-stripped West to Chinese civilization. It is not a flattering comparison for the former group and the differences are like night and day. It is a powerful reminder that as long as Western empire can continue to do what it does best, the human race and our Pale Blue Dot are doomed to extinction. If there is no mutually beneficial, win-win, multipolar world order, as is being promoted by the Chinese people, as well as a number of other anti-capitalist-lying-cheating-stealing nations, we can kiss our asses goodbye.

2 thoughts on “Mike Pompeo says, “Lying, cheating and stealing reminds you of the glory of the American experiment”. China Rising Radio Sinoland 190424”