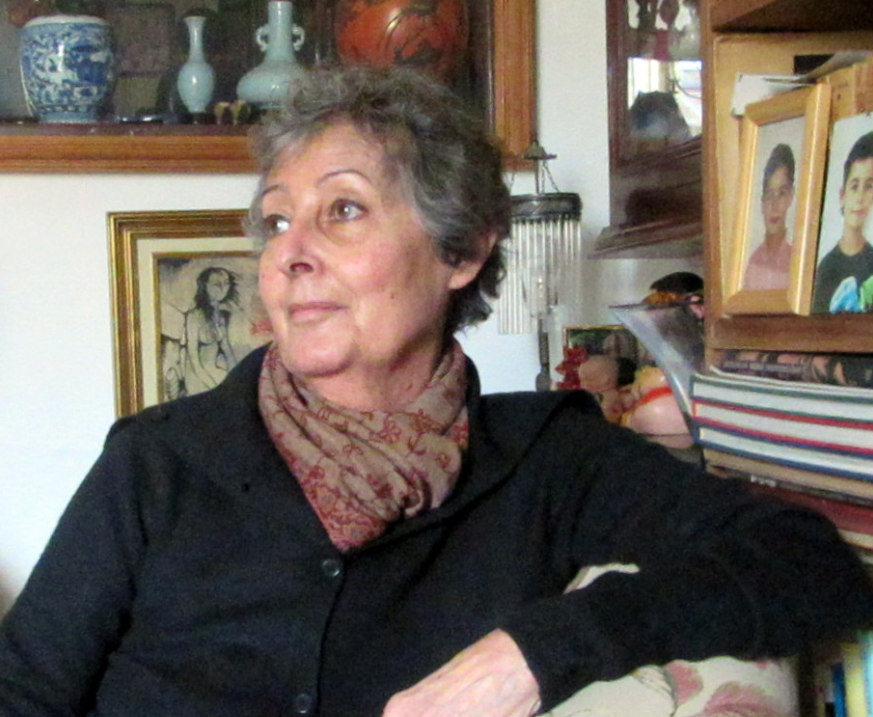 Pictured above: Macanese native Mrs. Graça Pacheco Jorge reflecting on her amazing life and the rich, colorful history of her home.

It is my pleasure to share this written interview with Mrs. Graça Pacheco Jorge. We met through the kind offices of Dr. T.P. Wilkinson (https://chinarising.puntopress.com/2019/05/13/dr-t-p-wilkinson-philosopher-poet-extraordinaire-on-china-rising-radio-sinoland-190513/). Going to Macau is a total breeze for my wife and me, living in Shenzhen. We only have to take a one-hour hydrofoil ferry ride across the Pearl River delta, and voilà – we get to enter the Anti-Hong Kong. The difference between these two old European colonies on Chinese soil is like day and night, water and oil. Macau is laid back, quiet and oozing with centuries of Sino-Portuguese culture almost everywhere you go. Hong Kong is mostly hustle and bustle, noisy, making money and doing business.

A native of Macau, Graça Pacheco Jorge belongs to one of the great, old Macanese families. She completed her studies in Mozambique and South Africa. With great dedication to the preservation of the Macanese identity, she collected various items and culinary recipes from the house of her grandfather, José Vicente Jorge.

In 1992, she published A Cozinha de Macau de Casa do Meu Avô in Macau, and the book was republished in 2003 by the Portuguese publishing house Editorial Presença. Graça Pacheco Jorge has also collaborated on documentaries about the Macanese culture.

In 2007, she co-produced several events for the 140th anniversary of the Portuguese author Camilo Pessanha. She also published Fotobiografia de José Vicente Jorge with her husband, Pedro Barreiros.

In 2011, she released a bilingual photographic biography dedicated to the Macanese people.

Graça Pacheco Jorge has been an Emeritus Member of the Confraternity of Macanese Gastronomy since 2010, when she started co-ordinating courses at the Portuguese School and other local learning institutions.

Article in the Global Times about Pedro and Graça Barreiros: http://www.globaltimes.cn/content/1130449.shtml

When Afonso de Albuquerque decided to conquer Malacca, in 1511, he came across Chinese vessels that were already trading with the Malayans. The Chinese offer him some help which he refused, saying they should stay and observe how the Portuguese struggled and carry the news to their superiors.

Once settled in Malacca he sent a first expedition to China under the command of one of his best captains, Jorge Álvares, that landed in the island of Tamou in 1515 and planted a stone pillar with the arms of Portugal.

After several ups and downs in the relationship, the Portuguese were permitted to settle in the peninsula of Macau, for commercial purposes.

During the following three centuries that followed, Portugal, through Macau, was the only European country allowed to settle in China.

The Portuguese administration depended from Goa but the Macanese had a great importance in the relationship with the Chinese authorities.

During the Napoleon era the English pretended to settle in Macau using the argument that they would protect them from the French but it was never permitted by the Chinese authorities.

Macau was always considered a Chinese territory under Portuguese administration. During the Second World War because Portugal remained neutral, Macau received hundreds of refuges from several counties, both Asian and European, which made the territory better known to the world.

In 1974, after the democratic revolution in Portugal, began the process of independence of the colonies and at the same time that of the return of Macau to mainland China which happened on the 19th of December, 1999.

Since then the main buildings that mark the Portuguese presence were considered international heritage, the Portuguese language the second official language and other features were kept namely stone designs on sidewalks in main streets, as well as the Portuguese name, after the Chinese, on all the street name, even for the ones constructed after the handover.

2 – The Macau cuisine is indeed unique. The origin is Portuguese as it was the one taken by the navigators on their voyages towards the Orient.

During the way they had to stop to refill their vessels with fresh water and food, as well as sometimes waiting for favourable winds to continue the journey. They explored local markets for vegetables, fruits and cereals that were introduced in their recipes.

Once arriving in Macau they were already familiar with products from Africa, India, Siam and Malacca.

Coming in contact with the excellent Cantonese gastronomy, they adapted not only spices and ingredients but also ways of cooking and preserving fruits and vegetables.

3 – When we go to Macau we never eat in Portuguese restaurants, we are homesick of the good Cantonese cuisine, that is not yet found in Portugal, so I am afraid I can not help you there, We also do not eat bread and drink coffee, but there are some coffee shops that serve authentic coffee, as well as some Macanese restaurants with the genuine dishes, such as Riquexo and Litoral. As we still have some family and old friends we eat Macanese dishes in their houses.

4 – When we go to our hometown, Macau, we like to visit the gardens of our childhood, the narrow old streets and the places where we lived with our family. Unfortunately every year, as we go looking for a special restaurant or shop we find it is gone and replaced by an ugly building with no quality.

Macau used to be a nice little town, but casinos have grown like poisonous mushrooms, transforming the islands of Taipa and Coloane, that used to be separated, connected by the Cotai Strip, where all the big hotels-resorts, challenge among themselves to see who can build a bigger and most impressive one. The air is polluted because there are too many cars, motorcycles, and air conditioning everywhere where once there was a nice fresh breeze from the sea.

Of course there are still nice places to visit and emblematic monuments, but it is difficult to walk it is so crowded, except if you go to the inner side of the town, like the Red Market and adjoining streets.

5 – In the point of view Art (painting, sculpture, ceramics, and so on), there no way of comparison, in the point of view poetry, the symbolism of the Chinese poets (Li Bai, Wang Wei, Du Fu and Pei Ti) is very advanced compared to the Portuguese and Europeans. One of our best poets that lived and died in Macau, Camilo Pessanha, was fascinated by the quality of Chinese poetry and decided to translate some to Portuguese.

6 – Hong-Kong was a British colony that began towards the end of the XIX century during a very difficult period for China, permitting the British to impose their rules and the system of life of the colony. Macau has a history of almost 500 years of common life with the Chinese.

7 – I agree with your opinion and I think that the integration was easier as I explained in number 6. The way of colonisation determines the way of the end of it.

8 – Yes, I do think it is well accepted by the people of Macau the return to China motherland.

9 – Macau, with an U, is the name that the Portuguese gave to the territory in the XVI the century, with an O is the English way.

The more correct version is with an U, the one adopted by the Chinese Government and one of the reasons that we do not translate the names of cities.

10 – My husband continues his work as a medical doctor, paints as a hobby and studies Macanese culture and identity. Now he is working on the Macanese Creole dialect.

As for me I continue with my work about Macanese Gastronomy and the history of the last two centuries.

At the moment I will be in Macau from the 16th May to the 22nd May to attend a photographic exposition about our mothers, the two younger daughters of José Vicente Jorge, and the way they lived in Macau in the first quarter of the XX century.

I attach the invitation in case you should be there at that time.

Note: unfortunately, my wife recently broke her leg and is quite immobile. She is crazy about Macau and I simply couldn’t go without her, so I missed meeting Mrs. Pacheco Jorge. Hopefully this summer, with her cast off, we will try to travel to Portugal for the first time, and can meet the Jorge’s.