Note before starting: John and I had a fascinating discussion on the CRRS show (below) and since then, we’ve gotten to spend time together in the Western Desert, becoming good friends in the process. He’s really special, 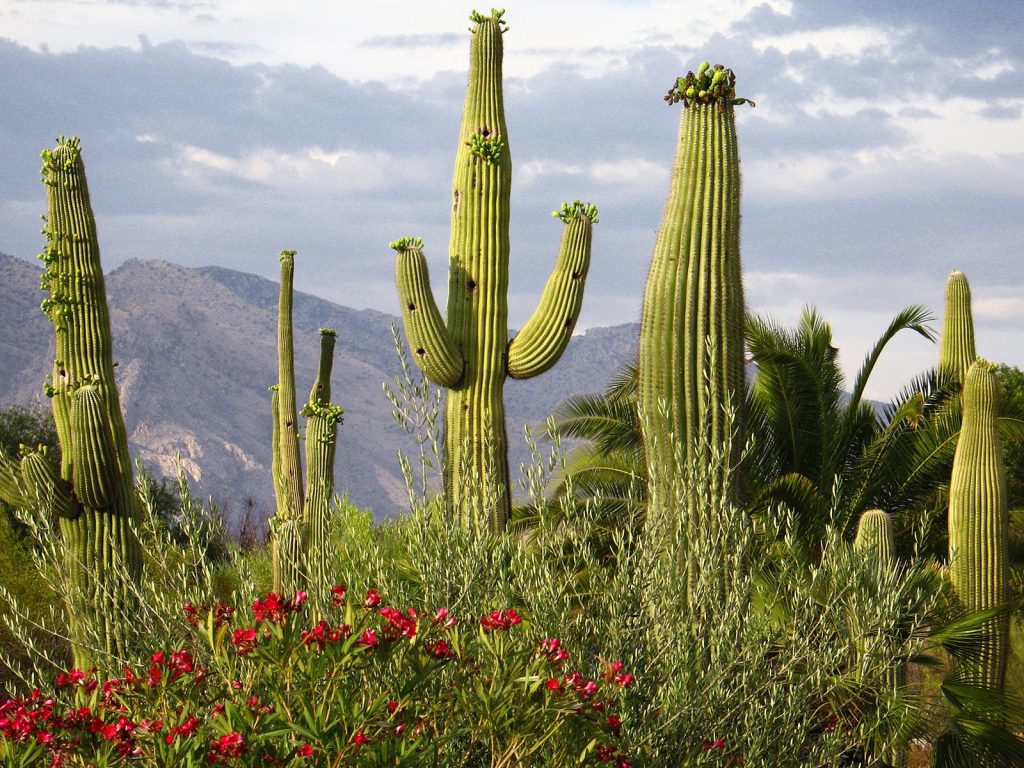 “You load sixteen tons, what do you get?
Another day older and deeper in debt
Saint Peter don’t call me ’cause I can’t go
I owe my soul to the company store.”
…chorus from the song “Sixteen Tons”, written by Merle Travis,
and performed by Tennessee Ernie Ford in 1955.

Those who know me understand that my life has been all about loading U-Haul trucks and trying out new places to live.  Like my recent move to Arizona’s second largest city of Tucson, which is also the U.S.A’s 33rd largest city.  The previous year of 2018 was spent in the heart of the country’s most conservative congressional district in the outskirts of Empire’s fifth largest city of Phoenix (District 6), and I figured that “liberal” Tucson would be a breath of political fresh air.  But, as it turns out, the air here stinks just as badly here as it does elsewhere in the rotten heartland of Empire, and blood money flows freely through the streets.  I’d forgotten that within the existing rigged and owned political system, there is no room for meaningful change.  In fact, it appears that this desert metropolis would dry up and blow away without an economic system with its foundation firmly embedded in wars, prisons, and border surveillance for profit.  There’s a story here somewhere.  “How I learned to stop worrying and love the police state”?

Number one employer in Tucson with roughly 11,000 employees:  The University of Arizona.  The U. of A.’s Defense and Security Research Institute works hand in hands full of hundreds of millions of blood bucks with the #2 employer: Raytheon Missile Systems (9600 employees), and #3 employer: Davis-Monthan Air Force Base (8400 employees).  The State of Arizona comes in at #4, and an unknown number of its employees run the bloated State Department of Corrections.  Border Patrol is #7, U.S. Army Intelligence at Fort Huachuca is #11, and Freeport McMoran Copper and Gold is #10.  I include the mining operation because its continuing profits and success in Chile, Peru, and Indonesia must be constantly monitored and protected by the likes of #1, #2, #3, and #11.  In other words, an extremely large percentage of my new neighbors’ lives depend upon the continuation of the sick-ass system of wars, violence, resource theft, border walls, and incarceration for fun and profit.  Why the hell couldn’t I have ended up in Camelot…Pleasantville?  Since they don’t exist, I guess I’ll have to settle for Margaritaville instead. 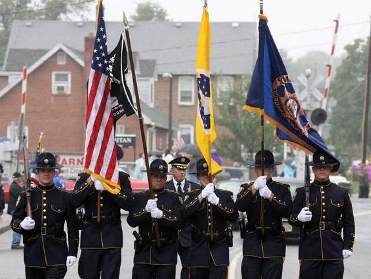 Arizona’s Dept of Corrections Honor Guard. Which war are these guys fighting?

Back about this time of the year, a half century ago, I had just refused induction into the U.S. Army, and told the U.S. Government and my local draft board that I wouldn’t be attending their abominable undeclared War in Vietnam.  Not under any circumstances.  My Dad, who’d always done his level best to provide life’s sustenance for mom, my sisters, and me during those years of hope and abundance following on the heels of WWII and the Korean War, worked in the “defense” industry.  He bought bearings for jet engines, for a little company which would later be bought by blood-money behemoth, Honeywell.  Bearings for jet engines designed to power the war birds which would deliver bombs, bullets, and napalm to the rice farmers of Vietnam.  It was inevitable then that we would eventually stand face to face on opposite sides of the line in the sand.  He was embarrassed because of my actions, and afraid of losing his top security clearance and even his job with an unruly son who refused to do his duty to God and country.  Those were interesting days…no, those days sucked right up there with some of the worst I can remember.

But what’s a poor soul to do when the only available jobs are designed to deliver bombs, bullets, and hell on earth to others?  What could possibly awaken the social conscience in the average Joe, who wants only to provide for his/her family?  The operating manual for Empire is clear:  Others must suffer and die so that we may eat and prosper, you don’t shit where ya eat, and you don’t bite the hand that feeds you when you owe your soul to the company store.  Fact is that Tucson is located seventy miles from the Mexican border.  A large number of its citizens live in the shadows.  Mexican immigrant invaders, desperately seeking asylum and salvation from a fucked up economic system created by the very country in which they now aspire to find fame, fortune, and maybe a roof and three steady meals.  For gods’ sake…if there was an ounce of justice in the world, this militarized bastion of Empire would still belong to its rightful owners:  the slightly less toxic Mexicans…along with the rest of Arizona, California, Nevada, and parts of New Mexico, Colorado, and Wyoming…which were “purchased” for ten million measley bucks via The Gadsden Purchase, after the U.S.A. kicked ass and purloined real estate, back in the mid-1800’s, after the Mexican-American War.  “Purchase”, my ass!  I’d bet that Mexico would gladly “purchase” it back with a fair amount of interest.

Tucson’s large population of desperate Mexicans and Central Americans, many of whom must constantly look over their shoulders for fear of incarceration and deportation, are prime cannon fodder for the likes of the city’s top employers.  In fact, the presence of so many “undocumented” po’ folks is the very reason why the strong arm of Wall Street has chosen this picturesque little city in the Sonoran Desert as a major center of operations.  Capital seeks cheap labor, and there’s an army of hungry, somewhat nervous brownish people out there who’ll do anything for a pittance, and do it gladly.  Remember The Dream Act?  I’m not certain, and don’t really care what happened with that insane idea.  The way I understand it, the proposal was:  A few years of U.S. Military duty as a paid assassin in exchange for a path to U.S. Citizenship.  Such a deal.  Mercenary armies have helped power many a declining empire into oblivion. 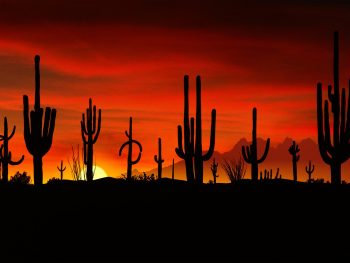 The hellishly hot Sonoran Summer weather has arrived, and I’m plodding up the paved trail/restricted road leading upward to the seven hundred and some odd feet of elevation gain and the summit of Tumamoc Hill here in west Tucson.  An escape from all the turmoil and bizarre goings on inside and out of my troubled mind.  From this lofty perch I can see all that Tucson has to offer, the Santa Catalinas to the north, the Rincons, the Santa Ritas, the Tucson Range, and the Tortolitas.  A giant potholed grid of asphalt, a few hundred thousand mostly baked adobe brick residences with barred windows, security warning signs, mean-nasty canines, dilapidated chain link fences, and rusted cars and appliances strewn among the cacti and weeds.  Waddling across the cityscape, a mostly morbidly obese population of electro-zombified, tattooed, green/blue/pink-haired, mindless minions.  Desperate professional sign-bearing panhandlers at every busy intersection, a handful of skyscrapers in the downtown and U. of A. neighborhoods, non-stop incursions of F-Whatever-the-fuck fighterjets and military helicopters, commercial flights, and hourly freight trains full of the neccesary raw materials of war.  Stately, multi-phallic, 30-40 foot Saguaros by the tens of thousands decorate the hillsides and arroyos.  Millions of white blooms of Spring have transitioned into brilliant red fruit, feeding the local birds and insects, who will insure the future of the giant cacti population by carrying the seeds to fertile desert soil.

I find myself wondering whether the Saguaro forests will survive beyond the collapse of the uncivilization in rapid decay, spread out below me.  For certainly the voracious, blood-sucking behemoth of the USA will continue its demise, and fall just as all empires before it.  And those unanswerable old questions constantly bubble to my mind’s murky surface.  What would it take to awaken a population which is fed and clothed by international piracy?  How do you convince a schmuck with a two hundred thousand dollar high interest student loan debt and an engineering degree from the University of Arizona that working at Raytheon is tantamount to mass-murder?  Who’s going to tell that testosterone-charged, fresh out of high school young buck that joining the U.S. Marines isn’t going to build him into a man, but, like so many boys before him, turn him into a fiend, a killer, a rapist?  Who among the struggling masses will picket, blockade, and burn the Company Store, to which they owe their souls?  How many of my neighbors can imagine a world without borders, wars, poverty, prisons, and fear?  But more importantly, who among us has the temerity, charisma, and the ability to deliver a fresh narrative capable of convincing a deaf and blind populace that there’s a better way forward?  Who?
About the Author 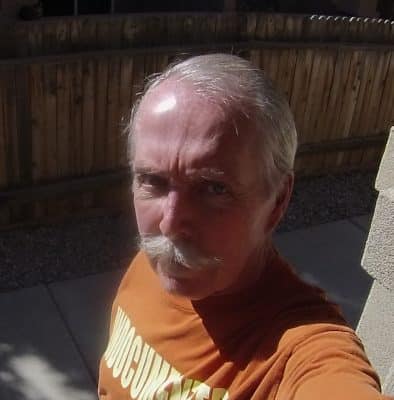 JOHN R. HALL, Senior Contributing Editor John R. Hall is a street-trained agnotologist with an advanced degree in American Ignorance. Other hats include: photojournalist, novelist, restaurateur, mountaineer, grocer, nurseryman, and janitor. He’s written three novels which have been read by almost nobody: ‘Embracing Darwin’, ‘Last Dance in Lubberland’, and ‘Atlas fumbled’. An untrained writer and college drop-out, he began his short career in journalism writing the ‘Excursion’ column for The Jackson Hole News & Guide. More recently he penned the ‘Left Column’ for The Molokai Island Times; appropriately on the island once known as a leper colony. John currently resides, writes, and protests injustice in the shadow of the Sangre de Cristo Mountains, and walks among the spirits of those who once occupied the 79 Disappeared Pueblos.

The buck stops with YOU. If you don't share this, who will?
Categories: Guest article, US Empire
| Tags: Arizona, Military, Tucson

2 thoughts on “16 tons of madness. By John R. Hall, The Greanville Post”