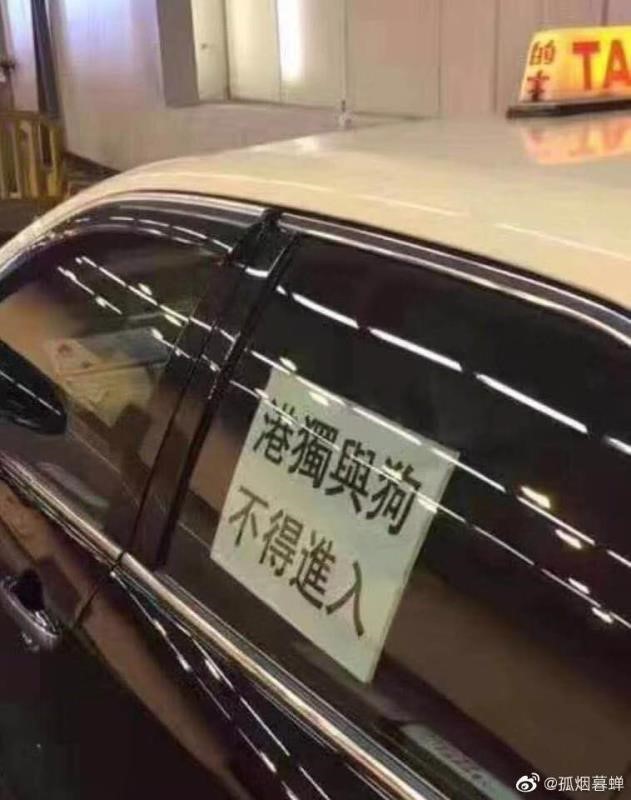 Pictured above: a sign posted in a Macanese taxi driver’s car. It says, “Solo Hongkongers supporting dogs are not allowed to ride”, with the obvious suggestion that they are in fact dogs. “Solo” in this case means the rioters, who do not represent the moral majority, thus they are isolated. At the top of the Chinese people’s list? Social harmony and economic stability reign supreme. The West is overplaying its color revolution in Hong Kong, everybody there and on  the Mainland understands it is being manipulated by foreign enemies, and it is making China’s communist-socialist way of life look like paradise.

Since my last article about the troubled events taking place in Hong Kong (https://chinarising.puntopress.com/2019/07/08/confucius-laozi-and-buddha-are-humbly-winning-against-the-imperial-west-in-troubled-hong-kong-china-rising-radio-sinoland-190708/), which I highly recommend reading/watching to really understand the Chinese concept of ren, the more the West’s color revolution keeps trying to terrorize the place and tear it up, the more it is driving the locals to Baba Beijing and China’s communist-socialist way of life.

After HK Governor Carrie Lam and her government decided to pull the extradition bill that was the purported reason for the all the protests (https://www.scmp.com/news/hong-kong/politics/article/3017795/hong-kong-leader-carrie-lam-says-extradition-bill-dead), the CIA again took all of these Confucian-Daoist-Buddhist concessions as a sign of weakness and is upping the violence and terror. Now, the protesters are demanding her resignation. Even if she did step down, the CIA would just keep amping the violence and chaos meter. Imperial, global capitalists have reptile brains and only know how to respond like Komodo lizards. In spite of this, she continued her campaign of Chinese ren, by showing contrition to government leaders, with it all being splashed in the local media (https://www.scmp.com/news/hong-kong/politics/article/3018447/emotional-hong-kong-leader-carrie-lam-opens-political). Definitely very un-Trump-man-like. The protests continue to turn more violent and are even taking place in shopping malls, for maximum terrorizing effect (https://www.scmp.com/news/hong-kong/politics/article/3018531/thousands-gather-hong-kong-park-latest-rally-against). Just like during the earlier failed 2014 color “Umbrella Revolution”, the Western backed protest puppets put up “Lennon Walls”, after John Lennon, with statements against the government and police plastered on them.

Even the colonial newspaper, South China Morning Post was obliged to splash headlines like this one (https://www.scmp.com/news/hong-kong/politics/article/3018473/sheung-shui-readies-itself-protests-hongkongers-take),

Notice iron poles and other weapons, above, as well as highly organized, which takes money and logistics. That’s where the CIA orchestrates the chaos. Policemen are getting badly injured and one was attacked by a hoodlum, who cut off his finger. These kinds of acts of terror are of course meant to cause the police to take revenge, to up the cycle of violence, to create more chaos and fear in Hong Kong. That’s what you learn in the West’s Color Revolution class 101. This attack was caught on camera, with the terrorist flying down a mall escalator, running over people to escape, clearly holding a knife. It was so shocking and bloody that the article I had was pulled from Chinese media, but I found the footage on Reddit (https://www.reddit.com/r/PublicFreakout/comments/cdelbm/hong_kong_protesters_cut_off_policemans_finger/). That article also pointed out the similarities between Hong Kong’s Western color revolution and the one that has destroyed Ukraine. Chinese citizens are much, much more plugged in than 95% of Euranglolanders.

The vast moral HK majority, who is not being paid by the CIA to attack police and property are fed up and fighting back. They are providing the police with reconnaissance about protesters and their movements (http://www.globaltimes.cn/content/1158121.shtml), to mitigate the destruction and chaos. They are especially indignant about the poor policemen and -women, who are really getting the ugly, short end of the stick here. These pro-Hong Kong protesters went through all the Lennon Walls and removed the messages that criticized the police, but left the ones critical of the government. Freedom of expression? Fine. Insulting their besieged police force? No way (https://www.scmp.com/news/hong-kong/politics/article/3018096/mass-row-and-scuffles-break-out-over-extradition-bill).

Everyday Hongkongers, like most Chinese, are a socially conservative bunch and are incensed that the protesters are openly denigrating the police. They do this by turning their backs to the cops and cupping one hand over where their anuses are. It mean suck shit. Here is a typical expression of outrage by working class locals, in a society where symbols of authority should be respected,

(Thugs are “cupping their assholes”, meaning telling the cops to suck shit)

If the West thinks they are fooling the Chinese in both the Mainland and Hong Kong, click on this article to see the images (https://mbd.baidu.com/newspage/data/landingshare?pageType=1&isBdboxFrom=1&context=%7B%22nid%22%3A%22news_9369995790807522266%22%2C%22sourceFrom%22%3A%22bjh%22%7D&_refluxos=a2). Even without knowing Chinese, you can see the West’s color revolution horror show is all spelled out: NGOs, the CIA, George Soros, National Endowment for Democracy (NED); the main HK riot leader, Joshua Huang Zhifeng, who is on the West’s payroll; and a photo of Victor Orban, Prime Minister of Hungary, who laments the same problems in Europe. The translated title says it all, Cultivating “Hong Kong independence” elements, conduct anti-china events… pulling back the skin of American NGOs. Another article (translated) talks about interviewing students, who were approached by a teacher from a prominent local secondary school. This Western agent was flush with cash to pay them to protest and riot. He was offering them cash,

A popular China journalist, Guo Wengui had a 30-minute program about how the US is, from top to bottom, organizing, paying for and controlling the HK riots, including providing travel and visas for the puppet terrorists. He says it is being done to put maximum pressure on China for Trump’s trade war. This title is translated as, Guo Wengui connected with Liang Songheng to expose the truth of Hong Kong’s anti-China campaign: the US government and CIA are colluding with Hong Kong spies to foment Hong Kong’s anti-China campaign to put pressure on the trade war (https://www.youtube.com/watch?v=V1UAPhguMmg). Guo gets hundreds of thousands of page views in the West on YouTube. In China, he gets millions.

Turncoat Jimmy Lai, a wealthy HK publisher, just met with US Secretary of State Mike Pompeo and VP Mike Pence in WDC, to “discuss the protests” (http://www.globaltimes.cn/content/1157686.shtml). Joshua Huang Zhifeng, the riot leader has already been in jail twice for his treasonous acts. He gets feted and given bogus awards from the US Department of State and the CIA-front NGO, National Endowment for Democracy. Traitors like these are despised by the vast majority of Hongkongers.

A Hong Kong contact reported that the protesters blocked a subway from moving for 45 minutes, pissing off thousands of regular working folk, who just want to get on with their lives, go to work and spend peaceful time with family and friends.

Articles and visual media exposing all this are all over China. Here is a collection of photos that hundreds of millions of Chinese on the Mainland and in Hong Kong have watched in disgust,

Take a look at this 1.5 minute video and click on “full screen”. You don’t need to understand Chinese to see that the West’s “peaceful demonstrators” are nothing but violent rioters and hoodlums, that have tons of CIA money to buy weapons and protection. The poor HK police force. They are tolerating this shit day after day. If rioters destroyed property and attacked police the way they are in Hong Kong, they’d end up permanently injured, tasered and shot at, with thousands in jail, like in France and the US today. Related videos on YouTube do not show this HK reality. There, it’s all goody-goody-two-shoes propaganda.

All of this chaos, destruction and violence are getting the exact opposite effect that the West wants. This failed color revolution, which has been ongoing since 2014, is showing people just how good life is in communist-socialist China (https://chinarising.puntopress.com/2019/03/07/60-seconds-over-sinoland-shenzhens-economy-beats-hong-kongs-dont-even-ask-me-about-quality-of-life/), and how well governed and democratic the Mainland government and its system really is (https://chinarising.puntopress.com/2019/03/02/60-seconds-over-sinoland-chinese-democracy-shuts-down-fracking-project-western-citizens-are-told-f-u-deplorables/).

I feel sorry for Hongkongers, but it is hard not to smile at the irony of the West doing such a wonderful job of exposing its phony version of “freedom and democracy” for what it is: global capitalism only serving the 1% elites, at the expense of the suffering 99%. I have a feeling it is going to get much worse, before it hits bottom. The CIA has unlimited drug-arms black money to keep pushing it to the hilt (https://chinarising.puntopress.com/2019/07/02/douglas-valentine-on-china-rising-radio-sinoland-the-cia-is-global-capitalisms-secret-gangster-army-190702/).

Lots of hyperlinks included here . Time to get smart!