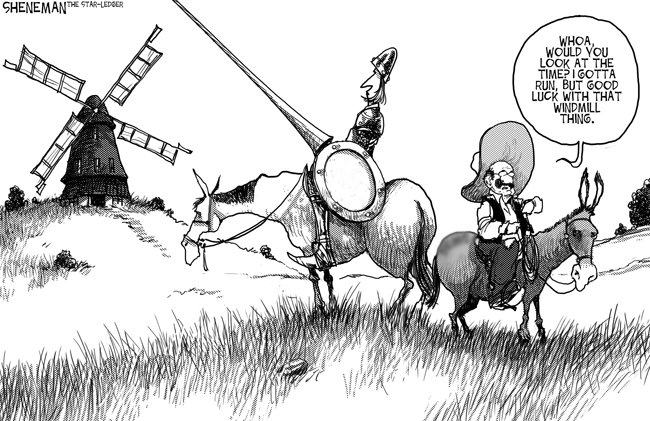 Pictured above: After tilting at windmills for $0.01166 per hour for the last six years, time for a modestly priced, romantic dinner every month with the missus.

Starting today, I’m going to be cutting way back posting articles here and podcasts on SoundCloud and YouTube. I’m looking at publishing one or two articles/podcasts per month, focusing on inviting interviewees, which gives me the opportunity to help other people in the anti-imperialist good fight, who deserve badly needed recognition, and if they are authors, maybe sell a book or two. I also plan on keeping up with a guest post or two each month, again to give voice to others, in our endless battle against global capitalism. So, from now on, a total of two to four posts a month…

There are two reasons this big decision:

Since 2013, I have gotten a grand total of $70.00 in donations to CRRS, and the three who did so all know me, which is a humiliating admission. One was a reciprocal donation with a fellow journalist, thus it does not really count. The pathetic reality is that CRRS has not gotten one anonymous contributor in six years! What I did get comes out to $11.66 a year, which is not even enough to buy Florence and me Big Mac Meals for our wedding anniversary. CRRS is topping four million pageviews a year, growing and not one measly greenback or RMB from an unknown fan. Not seeing The Greanville Post (TGP www.greanvillepost.com) donation thermometer move for days on end is also demoralizing, since Editor-in-Chief Patrice Greanville continues to pay interest on bankster loans to keep our two websites humming, while surviving on a three-digit social security check each month. There’s no other way to describe it: it’s disgraceful.

For all that I do to fight the good fight and for being TGP’s China Editor and sister website, Patrice magnanimously offered to pay me one-third of TGP’s donations. But I refuse to do so, as he is eternally paying thieves on loans to keep this website from being destroyed by deep state hackers, which costs thousands of dollars a year to protect. I told him to keep it all. It’s the least I can do for his tireless efforts and to have CRRS intact and safe. When I told my wife of my decision, she admirably did not bat an eyelash.

Apparently, writers who fight against empire and global capitalism are not worth supporting, even $1 annually, among over four million pageviews a year. Yet, bloggers who rant for/against Trump, howl about the evils of China, Russia, and support the elite’s Big Lie Propaganda Machine (BLPM) of endless, keep-you-distracted-while-we-pluck-you-clean, inane identity politics (For or against transsexual toilets? Here’s a hundred bucks, hero!), can each raise many thousands of dollars a year. I see them do it all the time on their websites. I may be anti-imperialist and communist-socialist (the latter which is maybe the Pavlovian explanation for my zilch contributions), but we still live in a market economy world, and with no family money or a nice spousal salary to pay the bills, oxygen and water just don’t cut it.

I’m 65, Florence is 63, she is not working and we both have ongoing medical expenses; she is still recovering from a broken leg in April and needs ongoing therapy. I only took four students online this year to have time for my journalism and writing, and our move to Chiang Mai is costing us a lot more money than we anticipated.

Since arriving here, I’ve organized CRRS to really crank out a lot of exciting topical articles and podcasts, which I started doing. I was planning on a daily article/podcast. I’ve spent months organizing scores of topic rubrics and banked hundreds of hyperlinks to refer back to. But fuck that. As Bill Maher likes to say – New Rules. If I’m going to be an indentured writer, I’ll at least do it on my own terms, so I can keep gaining moral and some monetary gratification, even if the latter is next to nothing. Next is better than nothing.

With my books, I make just enough to take Florence out to a so-so restaurant each month, sans white tablecloth, but it beats us fighting over French fries at Mickey D’s once a year, after a thousand hours plus of work on CRRS, which means working as a blog writer/podcaster making US$0.01166 per hour. Thus, I’m going to concentrate on getting The China Cycle (definition of a four-book series) Book #4 out, The Big Red Book on China, which I will use to promote The China Trilogy (see below). Then, maybe I can treat my wife to a decent monthly meal, including a cheap bottle of Dego. Heck, I might even be able to splurge buying a cut rose from one of the doe-eyed waifs and requesting a song from a great Filipino singer-guitarist, who pass by the tables. I’ve already got the song picked out: The Beatles’ In My Life. YOWZER!

After The Big Red Book on China, I want to write historical and narrative fiction (likely based on Sino-themes), something that has been stuck in my crawl for years, in part to honor my father, who was a brilliant ancestral-Irish author and poet (https://www.amazon.com/Cletus-Historical-Slavery-Redemption-Territory/dp/1492734411/). There’s also the Mao Zedong biography pinned up on the bulletin board, which is badly needed to correct all the projectile vomit Western propaganda about the man, but my writing friend Godfree Roberts and I are both very busy, so we’ll see (https://chinarising.puntopress.com/2019/04/04/hot-off-the-press-we-are-moving-to-chiang-mai-thailand-this-summer/).

In a while, China Rising Radio Sinoland crocodiles. I’d like to thank all of you for making this venue one of the most popular China-centered information sources on the global web. Now, I’ve got a big red book to finish. In the meantime, to dream about that cheap bottle of candlelit-dinner wine, I’m closing out with one of my favorite pop songs, which as I get older, takes on more meaning,

Or, with a visual backdrop,