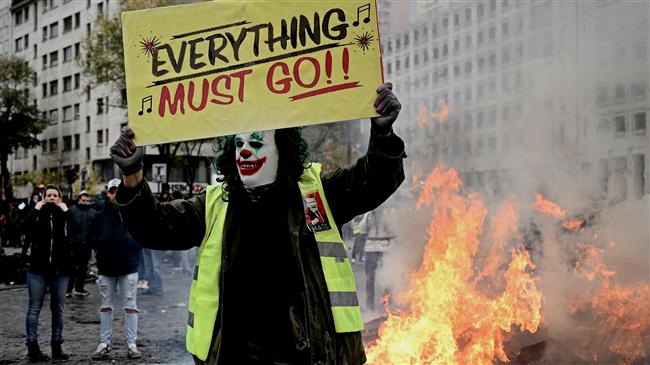 Pictured above: You can’t say the Yellow Vests don’t have a sense of humor.

Note before starting: Last summer, in our sleepy little corner of Normandy, France, we would see a handful of Yellow Vest protesters standing at Eisenhower Circle, in Bayeux. Each time, I rolled down my window and gave them a power fist of support. I wanted to go interview them, but with family and friend obligations, I missed meeting them in person. Ramin Mazaheri, on the other hand, has been in the trenches with them in Paris, getting tear gassed and attacked by the fascist police. Below is his look back on the Yellow Vests’ accomplishments, after one year of weekly protests.

Their sacrifices are heroic to say the least: 11,000 arrested, 2,000 convicted, 1,000 imprisoned, 5,000 hurt,1,000 critically injured and the innumerable tear-gassings. How good is the Big Lie Propaganda Machine (BLPM), behind the Great Western Firewall (GWF)? Nobody hears about the French government’s gangster terrorism on its own people. Yet, Hong Kong police fire one rubber bullet or throw one tear gas canister and it makes headline news (https://chinarising.puntopress.com/2019/11/28/hong-kong-ensnared-in-the-wests-color-revolution-hot-box-the-latest-news-and-analysis-china-rising-radio-sinoland-191128/).

Ramin and I got to meet, while my family spent a few days in Paris, on our way to Normandy. It is always an honor to meet my freedom-fighting, anti-imperial heroes. I strongly suggest you follow Ramin on PressTV (www.presstv.com), The Greanville Post (www.greanvillepost.com) and The Saker (http://thesaker.is/)

It’s best to read Ramin’s article on The Greanville Post article below, which has nice visuals and several videos to watch. After that, there is just the plain text of the article. Not nearly as enjoyable.

For many years to come France will be divided into two periods – before the Yellow Vests, and after the Yellow Vests. It’s widely believed in France that things can never go back to the way they were.

I’m not sure there can be a better yardstick of domestic success – a better gauge of sociocultural impact – than that?

Outside of France the Yellow Vests have given the world a precious gift, and at a huge sacrifice: nobody will ever view “French-style democracy” with the respect their government arrogantly demands as the alleged “birthplace of human rights”. For a generation or longer, “What about the Yellow Vests?”, will be a conversation-ending question to anyone who claims the moral superiority of the “Western-style” political system.

Systematic repression of the poorest classes are indeed “universal values”, but only within neoliberal and neo-imperial systems. Make no mistake: It has been one year of open Yellow Vest revolt against the economic dictates of that “neoliberal empire”, the European Union, and it’s neo-colonial puppet temporarily occupying Élysée Palace in Paris.

What the last year has testified to is the redemption of France’s revolutionary spirit. Not every country has that, after all.

England, for example, will foolishly “keep calm and carry on” – a perfect summation of change-hating conservatism – until the bitter end, always. This is why reading English-language media coverage of the Yellow Vests was so very similar – “English conservative [temperament]]opposes egalitarian movement in France”. They have been running the same story for 200+ years, going back to Edmund Burke, who founded modern Western conservatism with his (reactionary) Reflections on the Revolution in France in 1790.

France is not England, but 53 weeks ago I don’t think anyone imagined that the French could possibly muster the stamina, dedication and self-sacrifice to protest amid massive state-sponsored repression every weekend for one year.

It’s an amazing achievement, and only those full of spite and hate could deny them a modest present of honest recognition on their birthday.

But Western mainstream media coverage in English and French was just that – they claimed the Yellow Vests achieved nothing.

One thing the French don’t like to be reminded of is: the French Revolution failed, and quickly. It’s as if they forget Emperor Napoleon?

But the French Revolution occurred in an era of constant regional imperialism, war, slavery, repression of women, religious and ethnic sectarianism, etc. – we would be wrong to say it did not still have positive worldwide ramifications in the most important realms of politics, economics, culture, etc. The USSR – the only empire based on affirmative action – also failed, but we would be wrong to say it didn’t also produce positive changes for their people and also worldwide.

Quickly, here are a few tangible victories of the Yellow Vests: they prevented Emmanuel Macron from presenting a 10th consecutive annual austerity budget, they prevented Macron from de-nationalising the three airports of Paris, and the 10 billion euros in so-called “concessions” was credited with keeping French economic growth in the positive in the last quarter.

However, even if the Yellow Vests have obviously not yet toppled the 5th Republic and set up a new order, their cultural is inestimable. Just as the Occupy Movement of the US in 2011 gave us the slogan and mentality of “We are the 99%”, so will the Yellow Vests stand for something equally conscience-raising.

The Yellow Vests want a French Cultural Revolution, and should lead it

However, a big difference between the two movements is that Occupy was led by many college-educated “do-gooders” – and God bless them – whereas the Yellow Vests are undoubtedly a movement of the most marginalised classes.

Seemingly the most comprehensive survey thus far showed that few Vesters are unemployed, two-thirds of Vesters make less than the average national wage, and an even greater percentage regret a lack of cultural resources and social links. In other words: hard-working, (yet still) poor, isolated citizens who yearn for more cultural enrichment.

This is why I have repeatedly drawn a different parallel: the Yellow Vests are essentially demanding a Cultural Revolution. Only China and Iran have ever had one, and both were state-sponsored.

Cultural Revolutions put the values of the formerly-oppressed classes into power – everything is brought to a halt for perhaps years in order to engage in mass discussions, with the aim of drastically updating a nation’s democratic institutions and general culture in order to accord with modern political ideals. This is precisely what the Yellow Vests want: a long, comprehensive, democratic rethink and public debate over France’s inclusion in the European Union, the eurozone, NATO, and the Americanisation/neoliberalisation of their domestic policies.

Chinese peasants, Iran’s “revolution of the barefooted” and the rural-based Yellow Vests – it’s impossible not to admit the parallels. The West, of course, only insists that both Cultural Revolutions were huge mistakes.

Not true: China’s Cultural Revolution created the rural economic and human capital which laid the groundwork for their 1980s-onwards boom, although the West would have you believe its rebirth sprung only from Deng’s reforms; Iran’s Cultural Revolution swept away the elite’s oppressive aping of the West and created the first modern Muslim democracy.

The Yellow Vests insist that they are the “real” France, and after a year of talking with them I agree – they know as much or more about politics than I do. Politics is not rocket science, after all, but mainly applying common morality to public policy and daily events.

Iran and China already had a government inspired by socialist democracy (and not by aristocratic liberal democracy) when they embarked on their Cultural Revolutions, whereas France does not – thus the repression.

What did the Occupy Movement “achieve”, after all? They prevented no bailouts, they folded after infinitely less state repression and there is no direct movement linked with them today. However, only a Burkean conservative would insist that the Occupy Movement didn’t wake many people up to the struggles of class warfare, and of egalitarian right and greedy wrong. It’s never mentioned in the Western media – which only adores far-right, nativist, anti-socialist movements like in Hong Kong – but Algerians have protested for 39 consecutive weekends as well.

The Yellow Vests have not failed – they have much to celebrate on their birthday, and this article serves as a rare reminder of that reality.

Iranian and Russian media – doing France’s job for them

What’s important to note is that since late June – when France started going on summer vacation – Russian and Iranian media in Paris (including my Farsi- and Spanish-language colleagues) have been the only television journalists openly covering the Yellow Vest demonstrations.

My French colleagues have done the most cowardly thing possible – they quit the field. For many months people in Paris couldn’t believe I had to work covering the Yellow Vests on Saturday: I repeatedly heard, “I thought they were finished?”

With exceptions I can count on one hand, for many months French media has been either totally absent or hidden. There are certainly no reporters doing live interviews (even without a logo displaying whom they work for), even though the presence of live reporters inherently reduces the willingness of police to be violent. Considering the toll of violence – 11,000 arrested, 2,000 convicted, 1,000 imprisoned, 5,000 hurt,1,000 critically injured and the innumerable tear-gassings – it’s no wonder French people hate the media.

In France the vast majority of media are private, with editorial lines decided by a handful of billionaires – that’s just how Western journalism works, sadly. “Free speech”, they call it. However, where are the public media – they are paid by taxpayer dollars to objectively cover their own nation?! Quite pathetic….

This is probably why the Macron administration openly disparages Russia’s RT and Sputnik (we won’t get into their problems with PressTV here): we have spent the past year properly doing our jobs, unlike France’s media.

That’s too bad for France, but the unexpected and undeniable accomplishments of the Yellow Vests speak for themselves. Who knows what they might achieve in year 2?

One thought on “Yellow Vests reach 1 year: The redemption of France’s revolutionary spirit. By Ramin Mazaheri, The Greanville Post.”