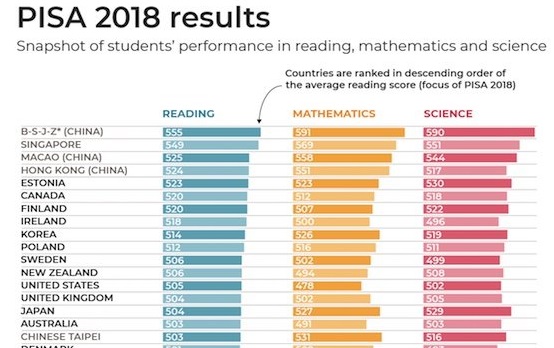 Pictured above: ouch! The latest PISA international test results are in, and it’s not pretty for the West. The top four countries are all Chinese.


PISA, OECD’s Program for International Student Assessment has released their global results for 2018 (https://www.oecd.org/pisa). Started in 2000, they run the test every three years for 15-year-olds in the OECD, which has mainly richer, developed nations.

In 2009, to compare the OECD’s educational outcomes with the rest of the world, PISA began to invite other countries to participate. To date, over 90 countries have taken the tests. China was not included in the first three rounds, 2000, 2003 and 2006, but has been joining every time starting in 2009, maybe to OECD’s chagrin.

The results speak for themselves, which can be seen at the end of this article, back to 2006. In general, Asia outperforms the rest of the world, and within Asia, predominantly Chinese territories usually top the list. For 2018, China, Singapore, Macao and Hong Kong took the first four places.

Over the years, I’ve heard all the excuses you can pin to a wall: the Chinese have a higher IQ, they cheat, they only allow their best students to take the tests, they cram and prepare, etc.

Does the US send students from drugged out, inner city hellholes to take PISA? Does France take kids from bombed out, minority enclaves that encircle most of its cities? United Kingdom and their violent, starving projects? I doubt it. Nor does China probably pick students from backwater rural villages either.  China does pick students from two metro areas, Beijing and Shanghai, and two provinces with smaller cities, Jiangsu and Zhejiang. In any case, there is an inherent bias in all countries to avoid their at-risk students. All countries chosen have the opportunity to prepare their students for the PISA tests, by taking past versions, which are readily available for the whole world, on the OECD’s website. No country has an inside advantage there. Cheating? I doubt that is the case for any countries, since the OECD administers and monitors the exams around the world. No country would want to be called out for doing it anyway. The risk of international opprobrium would be too great.

While there are statistics that show the Chinese having a three- to five-point advantage in IQ over the West, I’m always a little skeptical of the cultural bias that intelligence tests may have.  When Africans, Asians and Latin Americans get questions about tennis, technical topics and telecommunications in daily life – yet they may not even have electricity or internet/libraries in their towns and villages – that is tying one arm behind their proverbial backs. Wealthier countries can develop IQ tests in their own national languages based on their cultural norms, like China, but less wealthy Latin Americans, Asians and Africans likely have to accept tests developed in the West, in French, Portuguese, Spanish and English.

Even if the stats show the Chinese scoring higher in IQ, results in any socioeconomic situation are usually predominately determined by environmental factors, not genetics. You can be born with an IQ of 200, but if you are stunted during childhood from a lack of food, poisoned by chemicals, sickened by chronic diseases and have to cope with daily violence or insecurity, your ability to excel academically is seriously challenged. Likewise, if you are of average intelligence, grow up safe, healthy and well-fed, chances are you are going to do well in school and life.

Which brings me to China. My wife and I taught in the US for several years in typical public schools, then for nine years in “elite” private international ones in China. During that time, our younger daughter went to those fancy, international schools and this coming June, will have spent four years at a Chinese university, getting her Bachelor of Science. Before that, our two daughters went to French and US public schools, and then our older daughter graduated from a very good private American university. Living in China a total of 16 years, we also have an excellent understanding of China’s national public education system. Thus, we are knowledgeable on the subject.

Both our daughters got a great education and both are doing very well in life. But I learned through all this that the Chinese approach for going to school, compared to France and the United States is very different. This probably goes back to the civil service exams that candidates have been taking, for the last 2,000 years.  These morphed into the modern day gaokao, the big national exam that millions of Chinese take every year, to get accepted into university. All of these millennial tests are rigorous, challenging and not for the unprepared. I can tell you that Chinese students work much harder than French students, who work much harder than US ones. For the last generation in the West in general and the US in particular, there is this idea that students have to “have fun” and “be entertained”, in order to learn. Positive encouragement is only allowed and criticism has to be nuanced and sanitized into irrelevance. Teachers sure can’t offend families and students with the harsh truth.

This is not the case in China. The central focus of going to school is to bust your butt and yes, you are in competition with your classmates and results do count, both good and bad. As I explained in The China Trilogy (see below), Chinese civilization has mostly been an uncompromising meritocracy going back 5,000 years. Going to school and graduating are very much a part of that hard-nosed culture.

Is it any wonder that the Chinese have the best merit-based academic system in the world? The Chinese do well in these international tests because they work their asses off in the classroom, where there are positive incentives for doing well (getting to go to the best public schools and universities) and negative consequences, if you are a slacker (not getting to go to university, thus moving into the vocational-technical system for eventual lower paying blue collar and technical jobs).

Another number that jumps out from the 2018 list is Taiwan, called Chinese Taipei, to respect the One China policy. If genetics were key, then why do these Chinese rank well below the top four? Obviously, environmental factors are at play, since they are the same people. Maybe, after 70 years of being Americanized, they are “having fun” in class and “being entertained” in school too much. Those notions don’t cut it on the Mainland, where elbow grease and focused commitment are king and queen.

The PISA results are a good overall indicator of academic accountability, but not the final word. Russia scores quite low on the 2018 list, and in past tests has been just average, but is known for having one of the most rigorous and demanding education systems around. It cranks out world class engineers, IT experts, mathematicians, scientists, researchers and doctors. Maybe their 15-year-olds think PISA is a waste of time, or Russia could be using a different system to assess their students.

Parents, politicians, teachers and students have been complaining about their schools for thousands of years. Just ask Socrates and Confucius. Education has also been a millennial ideological battlefield for just as long, between rich and poor, elites and commoners and cities versus the countryside. Mao Zedong rallied his people for ten years, during the Cultural Revolution, to overcome this exact same conundrum.

Over time, schools become a mirror into the soul of the people, a reflection of a culture’s socioeconomic values. In communist-socialist China, it’s all about hard work, merit and sacrifice. In the imperial-capitalist West, it’s more and more about being entertained, political correctness and identity politics, which masks the rapidly widening economic gulf between the 1% and the 99%.

Trendlines since World War II between China and Eurangloland paint a vivid picture for 21st century’s winners and losers, survivors and the extinct. But then again, maybe I’m wrong. Since PISA started in 2000, the US has always been average at best, with Western European countries generally outperforming humanity’s globocop bully. However, in 2018, the US leapfrogged perennial rivals like Germany, the UK and France.

Hey, I think I know who deserves all the glory and I can promise you he will take full credit.

The man in the White House, President Donald Trump! 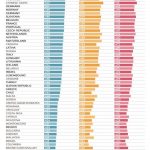 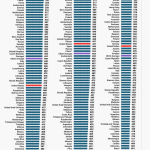 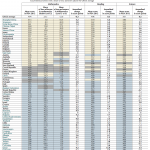 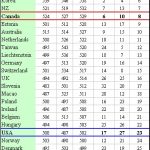 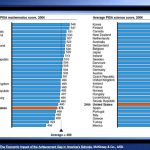