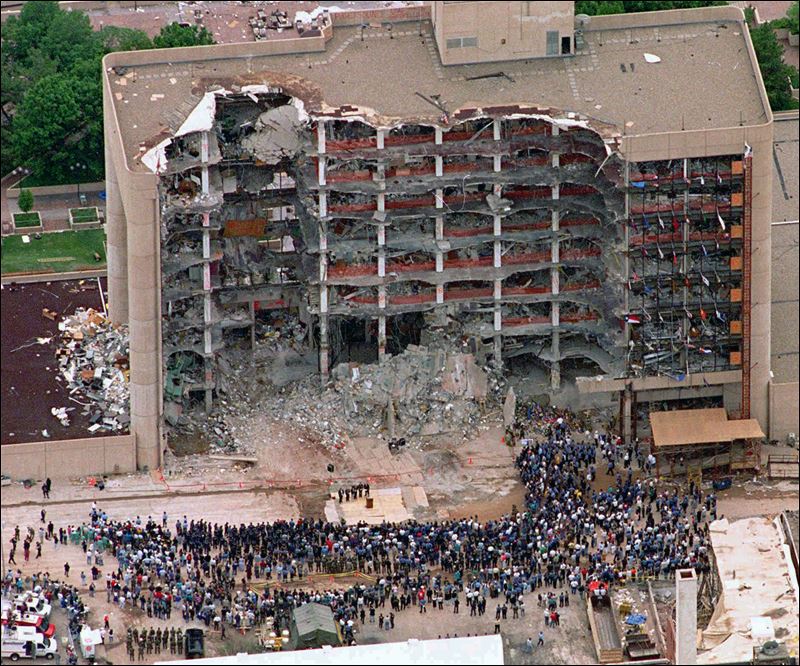 Pictured above: you don’t have to be an engineering genius to see where the two bombs went off inside the Murrah Building, on the left and in the center front. The two bombs that did not detonate and which were removed that morning (caught on local TV film), were in the back and on the right. Just ask yourself: if a truck-loaded ANFO bomb parked at the midpoint of the building right out front blew up, and it would of course go in all directions equally, which is simple laws of physics, then why did it only go to the left, towards 10 o’clock?

Also, where the people are standing at a right angle (like a backward “L”) is where the bomb-laden truck was supposedly parked. Bombs explode in every direction, including down into the ground. The supposed 2,800kg of powerful explosives would have left a huge blast crater 1-2 meters deep. There was no blast crater, because there was no ANFO bomb truck. It all blew up inside the building.


The other obvious proof that there was no ANFO explosion was the total lack of a toxic cloud of carbon monoxide and nitrogen oxide, which are the chemical by-products of the process. At least hundreds of the thousands of people in downtown OKC, going to work would have been made sick. There was never a mention of this, because there was no ANFO bomb blown up outside the Murrah Building. Our leaders were prepared to kill a few hundred innocents to test bringing down big buildings, but not the open-ended massacre of who-knows how many uncountable thousands in the area.

Their next test failed to bring down the World Trade Center in 1993. When 9-11 came in 2001, our oligarchs had done their homework and had a cap on the number who would die for American empire, a few thousand martyrs on the altar of obscene, 1% profits. It has all worked like a charm. Since that day, Eurangloland has been conducting Orwellian Perpetual War on global capitalism’s enemies, with no end in sight. Our oligarchs’ crimes against humanity should be taught in all MBA curricula, as a successful business model.


The evidence is staring you in the face, but the Big Lie Propaganda Machine (BLPM) inside the Great Western Firewall Matrix brainwashes you. The US government blew up the Murrah Federal Building, yet can make us believe anything, absolutely anything.


Note before starting: it is hard to underestimate the value of understanding what happened in Oklahoma City, Oklahoma 25 years ago today. It is important, because it did not go as planned by our oligarchs, so the evidence blatantly proves the fact that is was an inside job. It is well worth your time to watch/listen to the recordings above, which are a reading of the article further below.

One of my greatest regrets was to not realize much sooner what a blatant, US government sponsored false flag was the April 19, 1995 destruction of the Murrah Federal Building in Oklahoma City, Oklahoma. Two years ago, the whole, sordid, vile deed slapped me in the face and I felt like such an idiot not to have seen it for 22 years. Maybe it was too close to home, where I grew up.