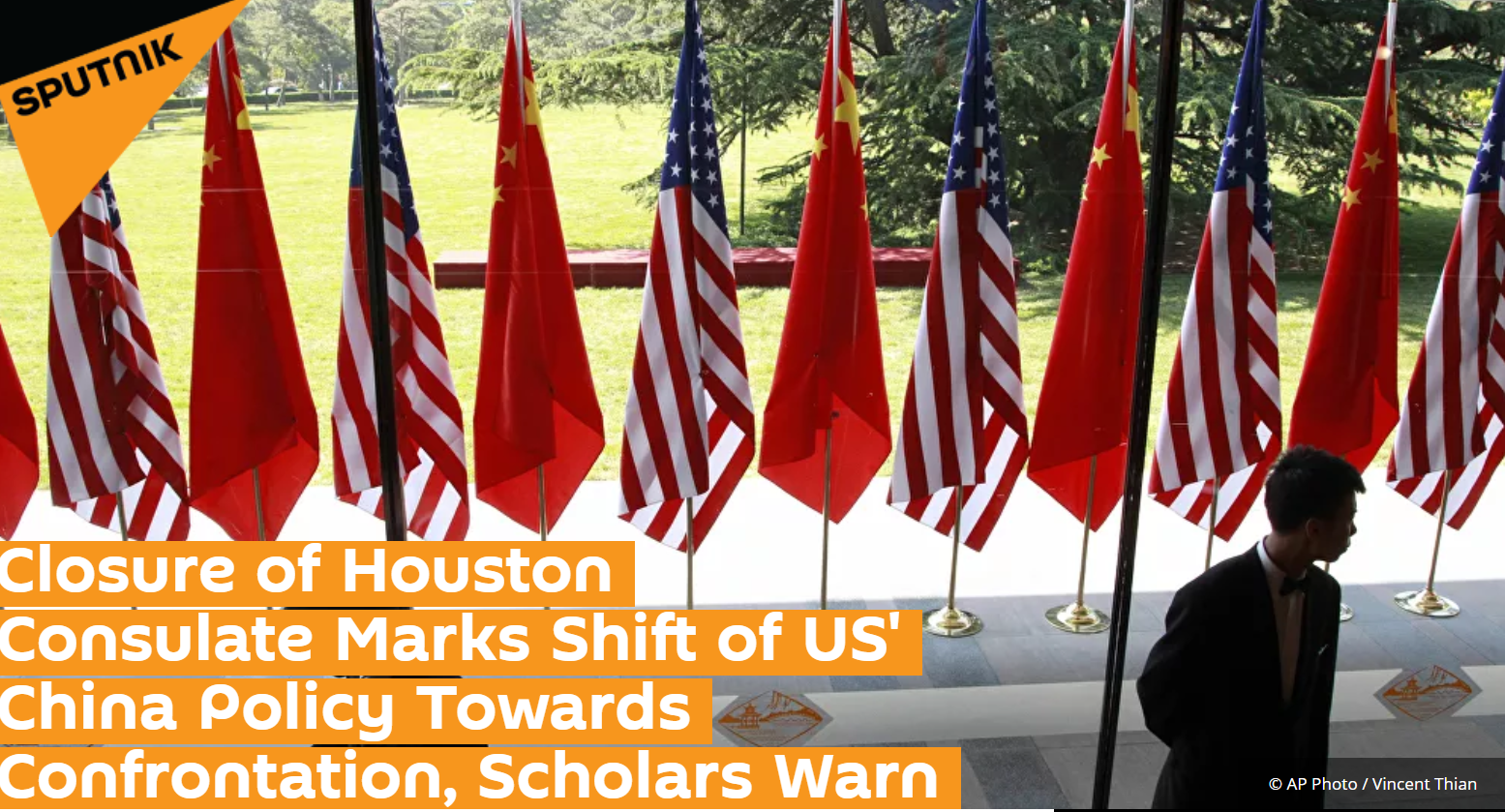 Note before starting: Sputnik belatedly sent me the published article hyperlink. They apologized, so here it is.

On Tuesday evening, the US government ordered Chinese diplomats to close the country’s consulate in Houston, Texas, in 72 hours. International observers have discussed China’s potential retaliatory measures in the wake of Washington’s decision and the future of the countries’ bilateral relations.

Providing no details on the abrupt demand to close the Chinese Consulate, the US State Department claimed that the step was taken “in order to protect American intellectual property and Americans’ private information”.

“[China] has engaged for years in massive illegal spying and influence operations throughout the United States against U.S. government officials and American citizens,” State Department spokeswoman Morgan Ortagus stated while commenting on the development.

The Chinese Foreign Ministry denounced the closure of the People’s Republic’s diplomatic mission in Houston as an “unprecedented escalation”, vowing to “react with firm countermeasures” if the US does not backtrack on its decision.

“At this stage, we don’t know the details behind the decision to ask the Chinese consulate in Houston to leave within 72 hours,” says Dr. Stephen Nagy, a senior associate professor at the International Christian University in Tokyo and a fellow at the Canadian Global Affairs Institute (CGAI).

The latest diplomatic row comes amid the background of worsening Sino-American relations related to ongoing trade frictions, the coronavirus pandemic, and the US announcement that it regards Beijing’s claims in the South China Sea under the so-called “nine dash line” as null and void.

The People’s Republic is likely to resort to a “symmetric response” to the latest White House move, claims Adam Ni, director of the Canberra-based China Policy Centre.

“Beijing will likely retaliate by ordering the closing of one of the US consulates in China,” he foresees, admitting that “Beijing and Washington are locked in intensifying strategic competition as well as the worst deterioration of relations in decades”.

However, as Beijing usually does not want to appear to be escalating tensions, China’s retaliation to the Trump administration’s demand is likely to be limited to targeting a single US consulate in a second-tier city or, perhaps in one of the first-tier cities, Stephen Nagy ventures.

Both observers believe that one can expect further escalation in the days and weeks to come with 2020 elections nearing. “This means pressure on all fronts including the most sensitive areas such as Hong Kong, Xinjiang, and Taiwan,” Nagy observes, suggesting that US-China bilateral relations will continue to deteriorate in the coming months and even years.

“Underlying all this is strategic competition, and the sharp turn of US’ China policy towards confrontation,” Adam Ni warns.

It’s hardly surprising that Washington and Beijing “reached this point this quickly” given that Trump’s top advisers, whom he seems to trust, are all China-hawks and that the November election is due to take place in less than 100 days, notes Tom Luongo, geopolitical analyst and publisher of the Gold Goats ‘n Guns Newsletter.

Having ruled out the possibility of a direct military clash between the US and China, the geopolitical analyst opines that “Trump seems willing to push diplomatic and economic aspects of hybrid war to their limit while only threatening physical confrontation.”

“I think Trump and his advisers all believe that putting strong economic pressure on China will hurt them more than it hurts the US and that this will eventually rein them in somewhat,” he suggests.

According to Jeff J. Brown, the editor of China Rising Radio Sinoland, producer of China Tech News Flash!, and author of The China Trilogy, “Western global capitalism realizes that socialist China is winning the 21st century hands down and its increasing desperation is apparent with an ever-rising cycle of ploys to suppress the latter”.

“Japan was forced into war with the United States in 1941, with much less trade aggression applied to it. Trump’s presidency has piled on more than enough casus belli against China, but Beijing will avoid taking US war bait at any cost, to protect its people, economy and long-term objectives. To save face with its citizenry, China may request that the US close one of its consulates in-country, like Wuhan, but they should shut down the one in Hong Kong, which is color revolution central. Two birds with one stone”, Mr Brown adds.

Prior to the demand to close the Houston consulate, the US slapped sanctions on 11 Chinese organisations on 20 July, over the alleged abuse of human rights in Xinjiang, by prohibiting them from buying American technology and other goods. Earlier, Washington imposed visa and asset restrictions against Chinese politicians over purported abuses of the Uighur minority. The Chinese government responded to the latter batch of US measures in a tit-for-tat manner, exerting sanctions against American senators including Ted Cruz and Marco Rubio.