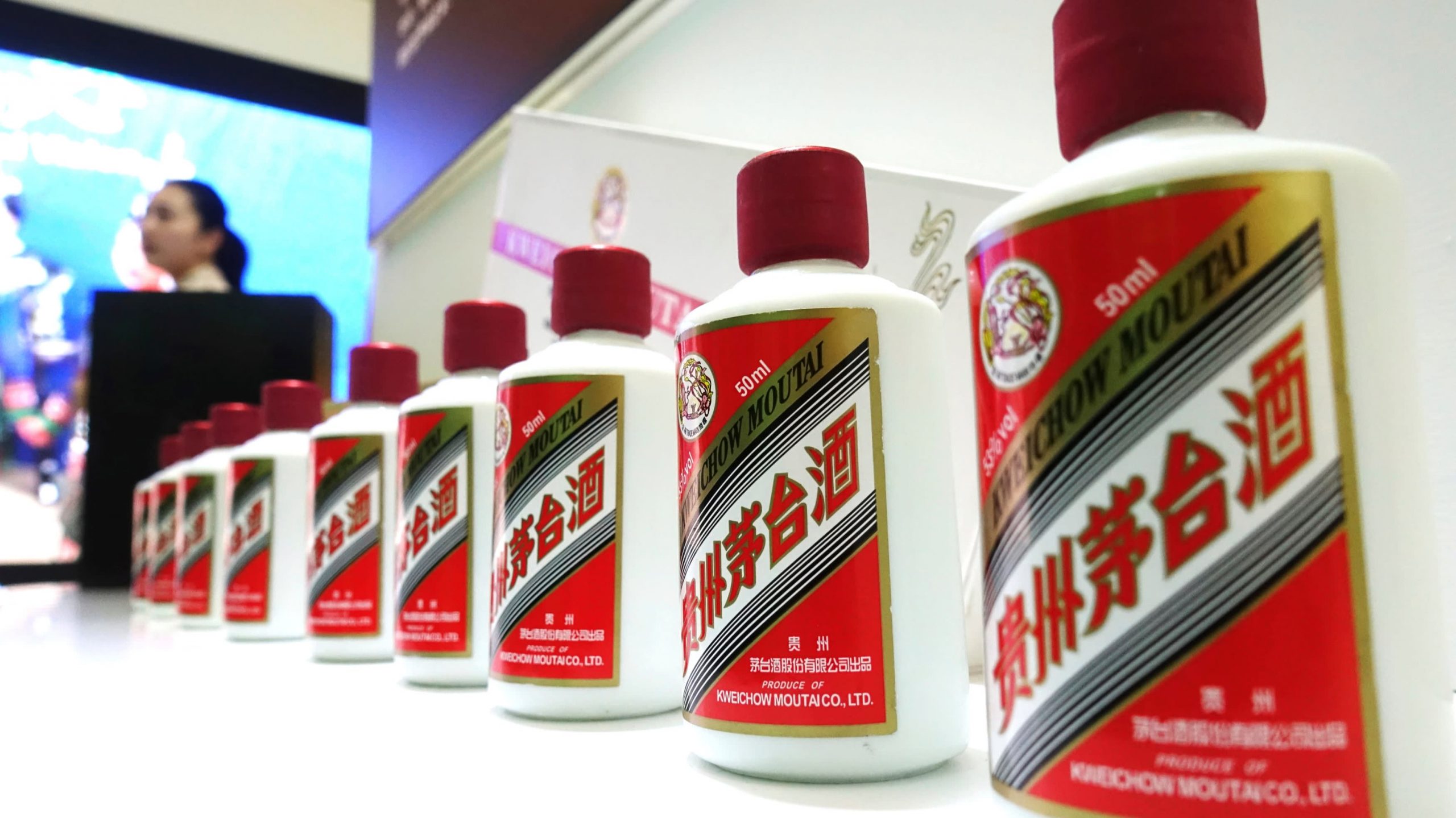 Pictured above: bottles of the most famous moutai brand in the world, Kweichou, based in Guizhou Province, China.

In my first China Trilogy book, 44 Days, I traveled to and spent time in Guizhou Province. It is one of the poorest areas in China and also one of the most spectacularly beautiful.

Every culture has its “white lightning”, high-alcohol beverage. Russia’s vodka, Scandinavia’s aquavit, Cuba’s rum, Mexico’s tequila, USA’s bourbon and France’s cognac, among many others. In China, it’s called moutai – no, not distilled from rice – but from sorghum, and the world’s most famous is distilled in Guizhou, the anglicized brand name as Kweichou. When I was traveling across Guizhou, I saw kilometers of red sorghum growing up the hillsides, ultimately destined to light up many a stomach and brain across dining tables in China. Ganbei (bottoms up)!

Like many of these historic Chinese companies, Kweichou is a state-owned enterprise (SOE). Make that a very big SOE, with a market capitalization of over two trillion RMB ($300 billion), meaning it is almost three times bigger than global beverage giant Anheuser Busch Inbev. About 20% of this is traded on the Shanghai Stock Exchange and the other 80% is owned by Guizhou Province’s State-Owned Assets Supervision and Administration Commission (SASAC).

We Westerners all know stories about how huge, transnational corporations easily corrupt governments all over Eurangloland. The officers and preferred stock owners can become billionaires by looting their companies’ assets and then, being “too big to fail”, they run to the state treasuries to get bailed out. It’s called socialism for the 1% and the 99% lose their jobs and get stuck paying higher taxes to keep them flush.

Or like in Greece and Cyprus, often via the World Bank and the International Monetary Fund (IMF), the global capitalist gangster banksters declare a bail-in, and simply steal money out of citizens’ bank accounts to pay government debts owed to the gangster banksters (https://www.globalresearch.ca/bail-in-the-birth-of-the-new-financial-order/5330946). Other Western countries have also codified bail-ins, when the time is right, making the Covid plandemic especially foreboding (https://www.globalresearch.ca/the-confiscation-of-bank-savings-to-save-the-banks/5329411).

Not so in communist-socialist countries. In China, socialism benefits the 99%, while the 1%, including companies, are expected to maintain solidarity with the masses, paying a lot in taxes, donations, etc.

Thus, Kweichou just announced that it is issuing 15 billion RMB ($2.2 billion) in corporate bonds, not to build a bigger liquor empire, but to use this money to buy shares in fellow SOE Guizhou Expressway Group, which has seen its debt load dramatically increase this year, due to Covid travel restrictions reducing highway toll traffic.

In further solidarity, Kweichou has come to the aid of its provincial government, to help with other debt. One of its subsidiaries has been authorized to spend 70% of its total capital to buy Guizhou bonds, for local governments to finance automobile purchases (https://asia.nikkei.com/Spotlight/Caixin/China-s-Moutai-comes-to-home-province-s-rescue-with-bond-purchase).

Who would have thought? For Westerners who are so accustomed to having capitalist gangsters line up at the taxpayers’ trough to rob them blind, it sound crazy doesn’t it? But this is how real socialism for the 99% works and it demonstrates the synergistic powers of SOEs being able to help each other out in times of distress. Who knows? The Big Buddhist Wheel of Life keeps on turning and maybe in a few years, it will be other SOEs helping Kweichou through a tough patch. It sure as hell beats parasitic capitalism’s massive layoffs and cynically planned bankruptcies, while the officers help themselves to criminal stock options and obscene golden parachutes, becoming billionaires in the process.

I have reported many times about why the capitalist West simply cannot compete fairly and on a level playing field with communist-socialist, anti-imperialist countries. China, DPRK, Vietnam, Russia, Iran, Venezuela, Cuba and a number of others defiantly refuse to be Eurangloland’s whores. Thus, global gangster capitalism resorts to piracy, asset seizures, sanctions, blockades, extortion, and if they are not strong enough, they get invaded and occupied, like Iraq, Syria, Libya, Yemen, Afghanistan and elsewhere, to be raped and plundered (https://chinarising.puntopress.com/2020/07/02/my-next-to-the-last-covid-swansong-article-looking-back-what-i-think-has-happened-and-what-is-going-on-today-china-rising-radio-sinoland-200702/).

This story about how corporations in China are working together to help each other out is one more example of socialism’s superiority over capitalism.

No wonder Westerners are totally brainwashed from birth to believe that communism-socialism is worse than slow, agonizing death. Otherwise, they might demand real people’s democracy for the 99% at expense of the oligarchic 1%.

Nah, can’t let that happen, because then you might get to keep your jobs and houses. Heaven forbid!