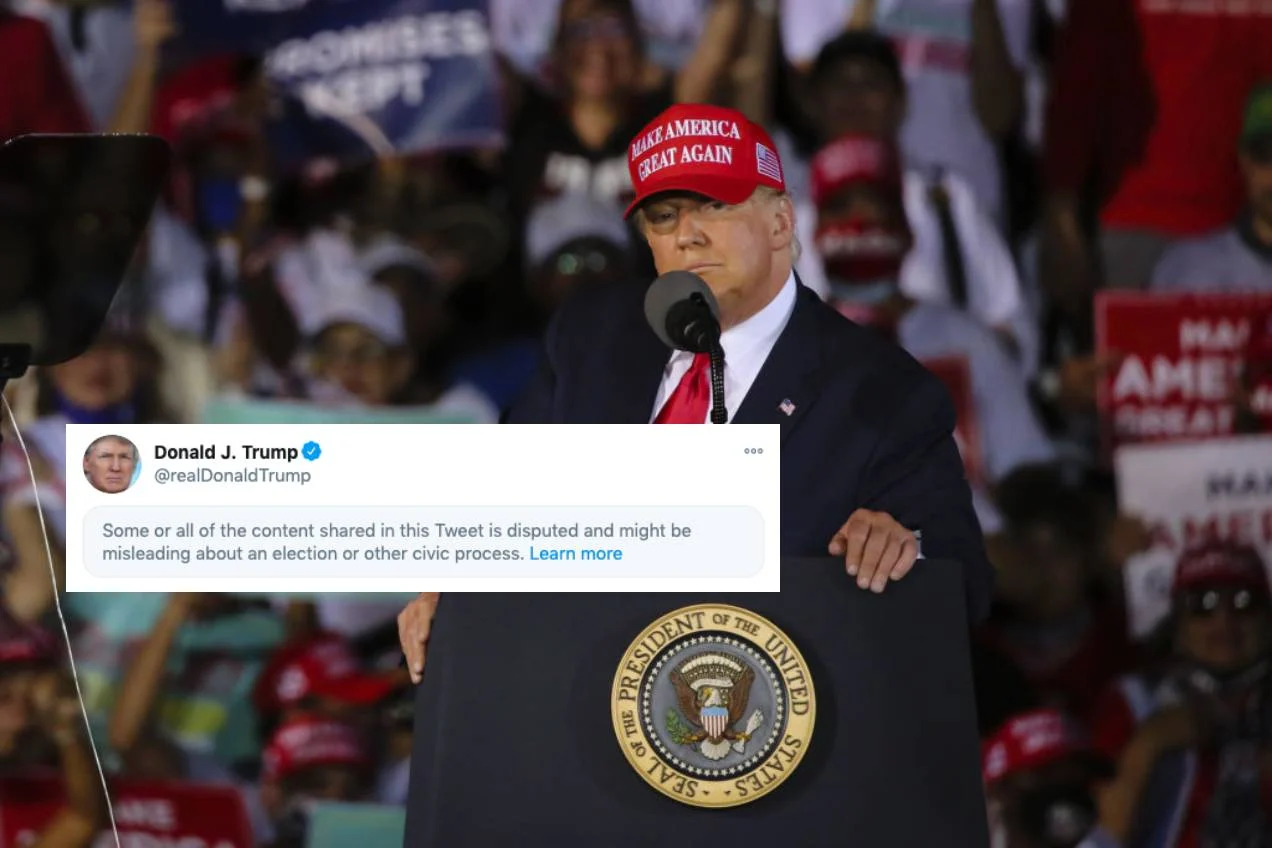 Pictured above: love or hate him, Donald Trump is the perfect sledgehammer to fully expose the USA’s corrupt, institutionalized electoral system, which started in 1776 and has never stopped. The 1%, aristocratic oligarchs are even censoring him for telling the truth, because they have a lot to lose. On both sides of the political aisle, beware of Eurangloland’s Big Lie Propaganda Machine (BLPM) brainwashing power.


China Rising Radio Sinoland · Trump Going Public vs Common Denial-the USA Has the Most Corrupt Electoral System in the World
Note before starting: I found this data intriguing and wanted to share it with you. In spite of four years of BLPM character assassination, Trump improved his vote among minorities and women, and less among White men, 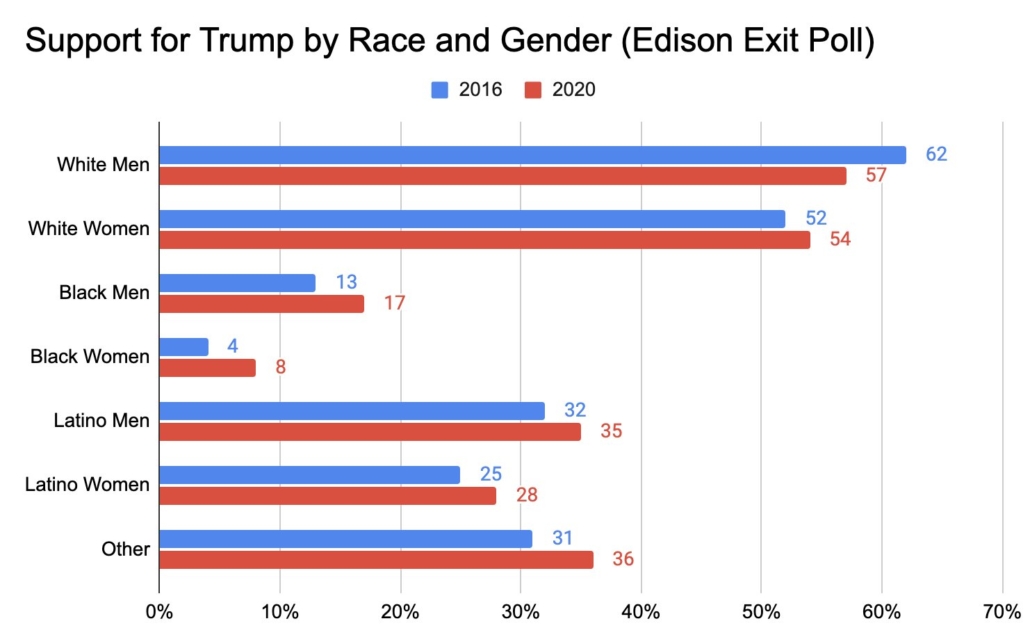 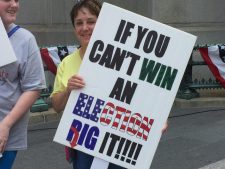 In Book #2 of The China Trilogy, China Rising (https://chinarising.puntopress.com/2018/06/30/praise-for-the-china-trilogy-the-votes-are-in-it-r-o-c-k-s-what-are-you-waiting-for/), I wrote a very informative chapter called, A Tale of Two Democracies: What It Is Like to Vote in the United States Compared to France? Since I’m a dual national, I vote in both countries, and the differences are like night and day. Thus, I quickly learned how transparent and accountable the voting process is in France, while the US system was designed from the very beginning, in the constitution, to be corrupt and undemocratic.

Without even getting into the whole aristocratic origins of the Electoral College, all the vote rigging in the US constitution, all the disenfranchisement of the poor, Blacks, Reds, Browns and Yellows, what is largely not understood is that in the US, each state’s governor is responsible for “guaranteeing” the honesty or lack thereof, of counting the votes (https://www.votefortheconstitution.com/voting—what-does-the-constitution-say.html). Democrats and Republicans lie, cheat, steal, bribe, extort, blackmail, use psyops, false flags, frame-ups and assassinations as a routine part of Western “governance” (https://chinarising.puntopress.com/2020/09/24/the-real-story-behind-usas-attacks-on-tiktok-wechat-huawei-and-zte-it-is-an-old-one-really-old-china-rising-radio-sinoland-200924/). Do you believe that either party in power in a US state is going to accurately count all those hacked hard drives (https://arstechnica.com/information-technology/2016/11/on-the-eve-of-election-day-e-voting-remains-woefully-vulnerable-to-hacking/) and opaque ballot boxes that disappear into the night (https://ballotpedia.org/Voting_methods_and_equipment_by_state)? It’s sure not France. It’s a farce and a sick joke to think otherwise. US election rigging began in 1776 and has never stopped.

Us Yankees are even proud of all this corruption and revel wallowing in the electoral cesspool. It’s all part of our Marlboro Man, Wild West, Hustler, Whatever It Takes to Win, Winner Takes All, Dog Eat Dog , Finders Keepers Losers Weepers, What’s Mine Is Mine-What’s Yours Is Mine, the End Justifies the Means ethos (https://www.newsweek.com/top-five-rigged-us-presidential-elections-511765 and https://www.washingtontimes.com/news/2020/jul/30/vote-rigging-and-hanging-chads-a-brief-history-of-/ and https://www.worldatlas.com/articles/u-s-elections-have-been-claimed-to-be-the-most-rigged-fraudulent-and-corrupt.html and https://www.grunge.com/126290/the-craziest-cases-of-election-fraud-in-u-s-history/ and https://www.washingtontimes.com/news/2016/oct/17/no-voter-fraud-isnt-myth-10-cases-where-its-all-to/).

Nevertheless, we insist on spouting the Big Lie Propaganda Machine (BLPM) brainwashing fiction that we supposedly have a “representative” democracy. OK, maybe for precinct school board elections, state questions and local property tax millage assessments. But, starting with state level legislatures, governors and judges, all bets are off.

After diving into this sewage lagoon, most candidates on the losing end step out, clean off the stench, accept the status quo and start planning to be on the winning side the next time, like Richard Nixon in 1960 and 1968. And if your candidate gets into office by cheating, like Kennedy in 1960, or Bush in 2000, you celebrate, thus reinforcing the built-in corrupt system.

However, Donald Trump is different. As much as he is hated and reviled, as megalomaniac and demagogic as he is, as flamboyant and outrageous is his modus operandi, I tip my hat to him for trying to drain the fetid US swamp, exposing the BLMP for all its fake news, calling bullshit on all the ersatz “liberals” and unmasking the phony Democratic Party for what it is an has been since 1980: it’s just Party D married at the oligarchic-neoliberal-neocon-Worldwide Wehrmacht-imperial-colonialist-global capitalist hip with Party R, laughably hiding behind the façade of Franklin Roosevelt’s (FDR) New Deal and Lyndon B. Johnson’s (LBJ) Great Society.

This US kakistocracy is a dangerous and destructive mirage, since nothing gets better for the US’s and global 99%. At least the Republicans are more open and honest about their geopolitical goals and economic policies. Other than identity politics (God, Guns, Gays and Abortion), starting the 1970s, the US is openly owned lock, stock and barrel by the Global Capitalist Party, on both sides of the aisle.

It’s hard to imagine what FDR and LBJ accomplished for common US citizens. For a few brief decades, we “deplorables” and “useless eaters” got thrown some food scraps and breadcrumbs off the 1%’s revoltingly sumptuous, gilded, overflowing banquet table,

Medicaid for the Poor, Handicapped and Disabled

Medicare for the Elderly

National Endowment for the Arts

National Endowment for the Humanities

Most of the 99%-supporting New Deal programs were adopted from Soviet communism-socialism and most of LBJ’s people powered programs are part and parcel of today’s communist-socialist-anti-imperialist countries, like China, Russia and Iran. Of course, the West’s BLPM brainwashes you to keep from knowing all this.

All of these programs could still be in force today, unadulterated. We regular working stiffs can only look back nostalgically at what FDR and LBJ did for us, when the American Dream was working for the vast majority. But, the 1% are relentless in their pursuit to own it all – 110%. It goes without saying that only liberal Democrats and Republicans during the New Deal and Great Society and up to the 1970s, supported these people-serving, progressive, populist – yes, socialist programs.

Nevertheless, from the time the ink dried on all these laws, most of the other US politicians worked night and day, in service to Wall Street, the Military-Industrial Complex and Gangster Banksters to de-fund, deregulate, privatize, subvert and abolish them. Starting in 1980, they didn’t even have to hide it. Being a neoliberal neocon became a badge of honor, as they clawed back and continue to do so, all these safety nets, socio-economic solidarity and commonsense programs to improve the lives of the 99%, while keeping everybody divided and confused with inane identity politics, so they overlook being raped and robbed by both parties. Their hatred of the poor, minorities and working-class citizens has been/is wildly successful, continuing.

If the US 99% ever wants to hope for a better, more just and equitable future, a good place to start is tearing down Eurangloland’s most corrupt electoral system. If you are glad that Biden can steal the election because you hate Trump, then long-term improvement in your and your children’s future will never happen. Being visionary means making short-term sacrifices.

That being the case, I sincerely hope that Donald Trump follows through to the very end, sticks to his guns and fully exposes this official cesspool, which is hiding behind its derisory propaganda of “pluralistic democracy”. He’s perfect for the job.

In closing, below is a small sample of reports covering the ongoing theft of the US 2020 presidential election. Even here in France, I’m having to use a VPN to see some of them, as they are being censored. You will never find this news in the BLPM, so I recommend you add to your bookmark favorites sites like www.rt.com, www.sputniknews.com, www.thegatewaypundit.com (which I just learned about), https://off-guardian.org and https://americasvoice.news. Even a Catholic website is covering it (www.lifesitenews.com). You may or may not agree with their worldviews, but oftentimes we need to “cross the political aisle” to find out the truth from a different perspective. I will come back and add more as I find them. This is just the tip of the corrupt iceberg. To wit,

The above is a short outtake from this complete episode:

2. The night of 3 November, Biden magically gets 138,000 new votes to zero for Trump, which is blatant fraud:

5. Minnesota and Wisconsin, both with Democratic governors, claim 89-90% voter turnout, a historical improbability: 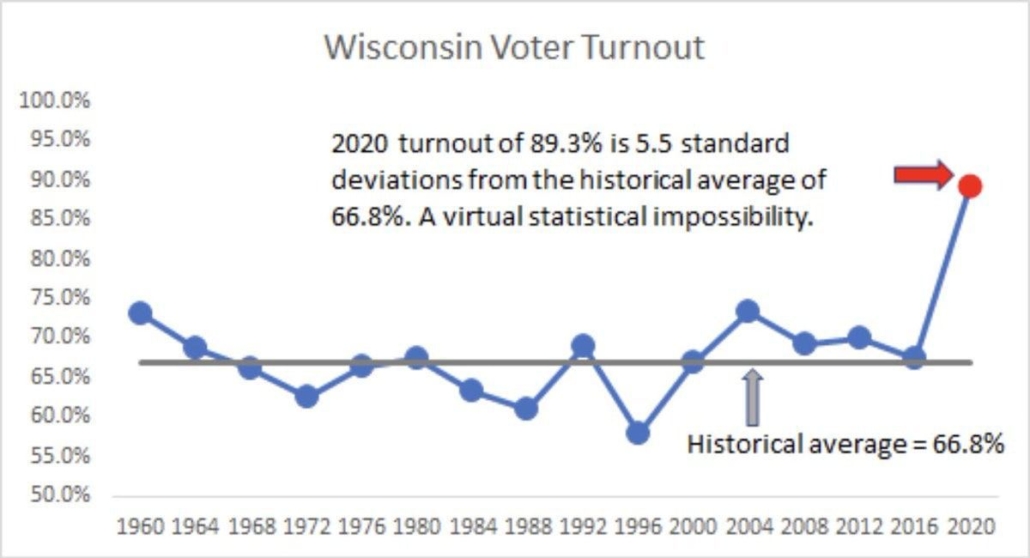 Note: 3rd standard deviations out is 0.3% chance of happening. Except for the Mad Hatter, 5th standard deviation isn’t even calculated. You would have to add a bunch of zeros after the decimal place. In other words: IMPOSSIBLE!

8. A recap of the election fraud:

9. Glen Greenwald offers a very thorough analysis of all the electoral sewage oozing in this election, Hold your noses and gag reflex:

12. Recount in Michigan flips county’s vote back to Trump:

7 thoughts on “Trump is going public with what is commonly denied: the USA has the most corrupt electoral system in the world. For the 99%, they are screwed either way. China Rising Radio Sinoland 201107”