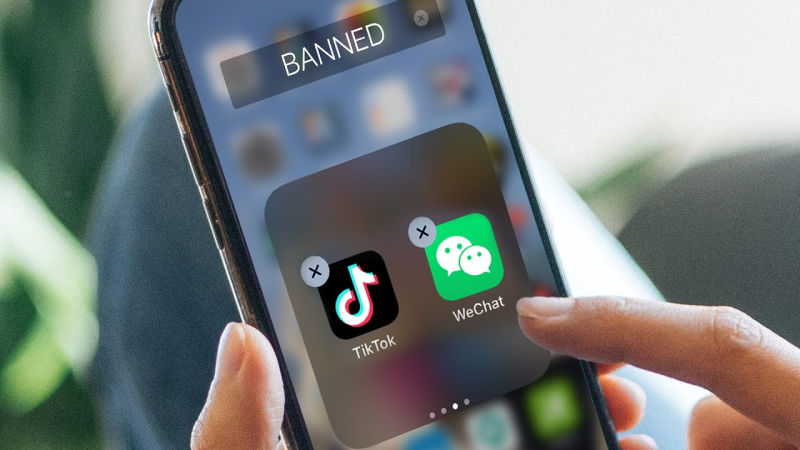 Pictured above: that’s TikTok and WeChat on a Huawei phone, full of ZTE components, all of whom are struggling against the West’s centuries’ old gangster global business model.

Downloadable SoundCloud podcast (also at the bottom of this page), Bitchute, Brighteon, YouTube videos , as well as being syndicated on iTunes, Stitcher Radio, RUvid and Ivoox (links below),

A Chinese tech company contacted me to ask for my analysis and comments concerning the USA attacks on TikTok, WeChat, Huawei and ZTE, and I’m happy to offer my perspective.

History is an immediate turn-off for many people, but in the case of this question, it is very, very relevant.

I recently interviewed Dr. Gerald Horne, Professor at the University of Houston, Texas, USA. It was to discuss his latest book, which I read, The Apocalypse of Settler Colonialism: The Roots of Slavery, White Supremacy, and Capitalism in Seventeenth-Century North America and the Caribbean (https://chinarising.puntopress.com/2019/10/14/dr-gerald-horne-discusses-his-book-the-apocalypse-of-settler-colonialism-on-china-rising-radio-sinoland-191014/). While the focus of his outstanding research is about the genocidal effects of European and US slavery, my eyebrows were often raised by many other factual points.

With the advent of European colonialism across the Americas, Africa, Asia and Oceania, starting in the 15th century, Britain, France, Netherlands, Portugal and Spain developed some extremely nasty business practices. Among themselves, they attacked each other incessantly with piracy, sanctions, blockades, embargoes, kidnapping, extortion, bribery, blackmail, espionage, assassinations, false flags, color revolutions, backstabbing on treaties and contracts, asset theft, invasions, occupations and war. Reaping obscene profit margins up to 1,700% per annum, from the nexus of their global slave-sugar-spice-opium-tobacco trade across these targeted peoples’ lands and their natural resources, Europe’s and then USA’s gangster instincts predominated and became the norm for “doing business”.

Western trade and commerce devolved into mafia-style smash-and-grab, might-makes-right, what’s-mine-is-mine-what’s-yours-is-mine affairs. Given this, over the centuries, Westerners became fabulously wealthy, fat and lazy in their work habits,

Why put in an honest day’s effort, when we can just steal it? Why bother competing on a level playing field, when we can simply destroy, suborn and sabotage the competition?

With European and US dominance of global affairs for the last 500 years, this business model has become so normalized across the planet, that even many of the developing world’s victims of this pillage and plunder have become inured and resigned to their “fate”.

Flash forward to today’s headlines, and realizing this crucial, ignored and censored historical background, what is happening to TikTok, WeChat, Huawei, ZTE and so many others can be put into proper perspective. They are just the tip of the iceberg.

Remember Meng Wenzhou, Huawei’s Chief Financial Officer, who was effectively kidnapped by the USA and Canada last year (https://chinarising.puntopress.com/2020/05/14/ren-zhengfei-founder-of-huawei-says-my-mentor-is-chairman-mao-zedong-im-not-surprised-are-you-china-rising-radio-sinoland-200515/). This is not new and is sadly Western standard operating procedures (SOPs). Company executive Frederic Pierucci was kidnapped by the USA in 2013, imprisoned for two years on similar trumped charges, which was used to extort France’s flagship Alstom Corporation to pay $772 million in ransom and sell off its most valuable portfolios to its USA competitor, General Electric – all to gain his release (https://www.globaltimes.cn/content/1142358.shtml). Pierucci survived his maximum security incarceration and wrote a book about it, The American Trap: My battle to expose America’s secret economic war against the rest of the world (https://www.bookdepository.com/American-Trap-Frederic-Pierucci/9781529353617). These are the high-profile cases that make the headlines. There are so many more. In the USA, Chinese scientists continue to be arrested or are mysteriously dying  (https://mp.weixin.qq.com/s/px8CoQqZ7JBqIKMk_h0H1A).

In light of the West’s deeply engrained, historical global business modus operandi, extorting TikTok and WeChat to sell off their assets to US interests should come as no surprise, and you can rest assured that there will be many more to come.

ZTE being fined billions of dollars for illegal US anti-Iran sanctions? Huawei being endlessly attacked in an effort to destroy its pan-global success (https://chinarising.puntopress.com/2018/12/19/us-trying-to-sabotage-huawei-zte-and-sino-5g-too-late-game-over-china-rising-radio-sinoland-181219/)? This is nothing new under the Western sun. It is the West’s SOP when it can’t compete on a level playing field with a superior competitor. In 1987, the USA destroyed Japan’s global leader, high-tech Toshiba, using the same sanctions-fines-extortion model coming down on Huawei and ZTE today ((https://chinarising.puntopress.com/2018/12/19/us-trying-to-sabotage-huawei-zte-and-sino-5g-too-late-game-over-china-rising-radio-sinoland-181219/). The only reason it has not worked on Huawei, ZTE and other national concerns is China’s socialist economic system (https://chinarising.puntopress.com/2020/09/13/top-ten-car-producing-countries-1950-2019-a-video-allegory-for-why-the-capitalist-west-cannot-compete-against-communist-socialist-china-china-rising-radio-sinoland-200913/). Nevertheless, it is this same longstanding, mafia-style smash-and-grab, might-makes-right, what’s-mine-is-mine-what’s-yours-is-mine Western model. Sadly, these kinds of wrecking ball, sledgehammer tactics are studied and analyzed in business schools all over the world, legitimizing them in the process.

Piracy and plunder on trumped up, unilateral “sanctions”? The USA is stealing ships from the DPRK (North Korea) with impunity  (https://www.nknews.org/?s=ship+seized&sort=&start=01-01-2010&end=24-09-2020. Seizing ships and pillaging Iran’s hydrocarbon exports on the high seas? Just another routine day of the West doing business gangster style (https://www.greanvillepost.com/2020/08/18/the-despicable-empire-finally-acts-to-tighten-the-noose-around-venezuelas-neck-tankers-seized-in-high-seas/). Looting Venezuela’s national assets with phony sanctions? No problem for the UK to steal its gold reserves (https://prruk.org/britains-theft-of-venezuelas-gold-is-part-of-illegal-us-regime-change-agenda/), nor the US plundering the country’s corporate portfolio (https://www.rt.com/business/454675-30-billion-stolen-venezuela/).

The problem is, we all get so inured about how the West does gangster global business, that we normalize and internalize it to the point where it becomes banal and accepted,

History has a habit of repeating itself and this internalization goes back, way back. Former United Nations General Secretary Dr. Boutrous Boutrous-Ghali summed it up best, I quote,

Coming from a developing country, I was trained extensively in international law and diplomacy and mistakenly assumed that the great powers, especially the United States, also trained their representatives in diplomacy and accepted the value of it.

But the Roman Empire had no need of diplomacy. Neither does the United States.

Diplomacy is considered by an imperial power as a waste of time and prestige, and a sign of weakness.

In closing, keep all this in mind as you scan the headlines. Maybe it is time to dig deeper and start speaking up to set the record straight.

4 thoughts on “The real story behind USA’s attacks on TikTok, WeChat, Huawei and ZTE. It is an old one – really old. China Rising Radio Sinoland 200924”