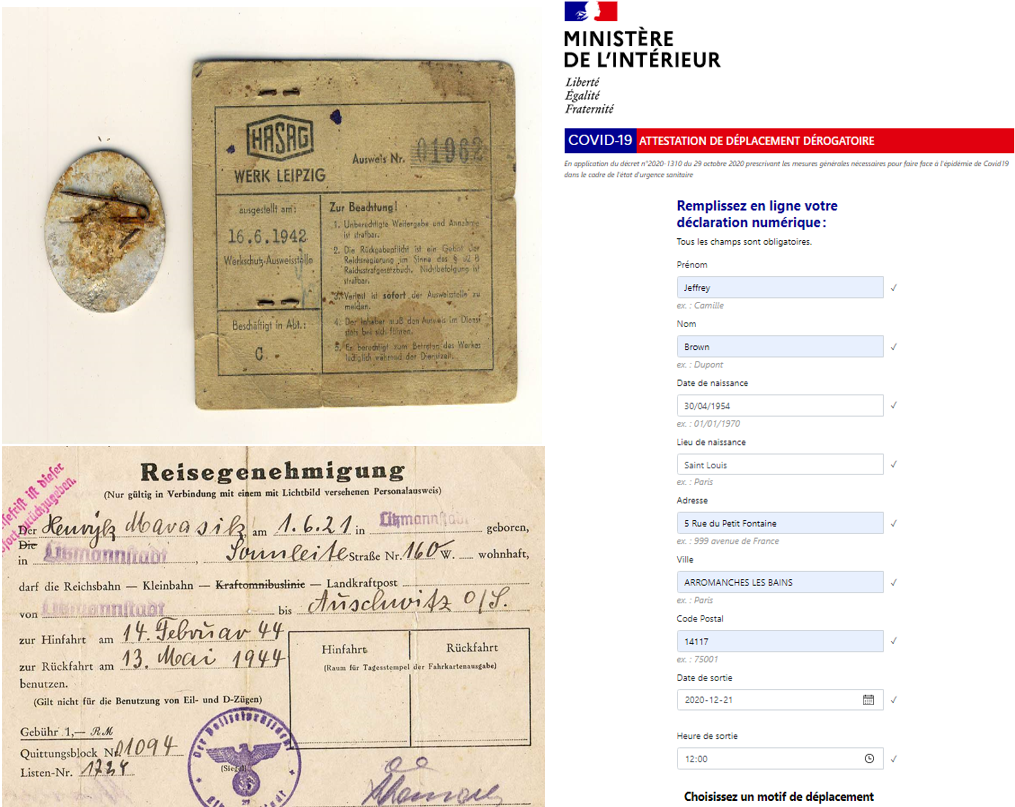 Pictured above: the only difference between my Orwellian French Ministry of Interior house sortie pass and the fascist ones used in European ghettos during World War II is mine is digital. That is all. Europe is already a Covid-Great Reset Plandemic dystopian police state, and Eurangloland’s kakocrats are just getting started, unless they are defied by a popular, sustained revolt.

Note: in support of uncensored journalism and because YouTube has already given me two out of three strikes towards banning me, I started Bitchute and Brighteon channels. However, they are both relentlessly attacked by the deep state, so they have to install a number of anti-hack filters, which really slows down uploads and processing there. For their truth telling they also get de-platformed without notice, but one or the other is always working. Just in case, please SUBSCRIBE TO BOTH NOW and start watching there, to plan for my eventual YouTube shutdown, which could happen any day, just like hundreds of thousands of others. Thank you.

Bitchute video does not censor:

Brighteon video does not censor:

Deep state YouTube, so please patronize free speech above. In any case, YT censored it!

SoundCloud audio is not censoring that I know of:


China Rising Radio Sinoland · Ever Oppressing Covid – Great Reset Plandemic Proves It Is Forever and Ever In The West. Unless We…

Note before starting: I exonerate all communist-socialist-anti-imperialist countries from this story. It’s all about Eurangloland and global capitalism.

Based on hundreds of hours of research and reporting, Covid was developed at Fort Detrick, Maryland, USA, field tested or leaked in this geographical area in March 2019, and then that summer in Lombardy, Italy. In October 2019, it was seeded in Wuhan, China for the West’s Big Lie Propaganda Machine (BLPM) to spew “Kung Flu” projectile vomit all over the planet (https://chinarising.puntopress.com/2020/03/07/its-all-here-the-china-rising-radio-sinoland-covid-19-chemical-and-bioweapon-file-film-and-tape-library/).

Most importantly, the West knew that China, being the most heavily attacked country by foreign biological weapons (BW – www.bioweapontruth.com) would respond to it as germ warfare. Baba Beijing could not be complacent or take any risks, whether it was truly dangerous or not, which it isn’t. It’s no more deadly or contagious than seasonal flu (https://chinarising.puntopress.com/2020/09/10/im-going-to-be-as-popular-as-the-plague-for-this-very-unwanted-report-pardon-the-pun-covid-is-no-more-dangerous-than-the-seasonal-flu-the-statistics-tell-the-truth-then-why-the-p/).

Nevertheless, China’s massive take-no-chances response to protect its people gave the Western trillionaire dictatorship the critical mass hysteria it needed to brainwash the global capitalist world that they had to adopt the same BW attack model. This would justify the WHO/CDC/Big Pharma worldwide Covid template – Rockefeller’s 2010 Lockstep and Bill Gates’ 2019 Event 201 plandemic scenarios – to foist on their REAL targets: asset rich Euranglolanders (https://chinarising.puntopress.com/2020/08/06/peter-koenig-tells-the-truth-about-covid-only-to-be-vilified-by-the-left-right-center-friends-and-foes-alike-its-called-speaking-truth-to-power-here-is-our-discussion-china-rising-radio-sinol/).

Euranglolanders are the only valuable resource left for global capitalism to rape and plunder, since too many historically exploited countries are now free and independent of Bretton Woods’ tyranny (https://chinarising.puntopress.com/2020/07/29/why-eurangloland-has-decided-to-do-everything-possible-to-destroy-the-chinese-peoples-way-of-life-before-it-is-too-late-even-if-it-means-sacking-the-rest-of-the-world-china-risin/).

The West’s trillionaires can’t use colonialism, the World Bank (WB) and International Monetary Fund (IMF) to pillage their own citizens’ assets, (except hapless and now impoverished Greece) like they have in Africa, the Americas, Oceania and Asia for the last 500 years. The only way they can rape Eurangloland is to create a high-tech scheme to impose extreme, neoliberal WB/IMF structural readjustments. Ergo, the Covid-Great Reset Plandemic is working very well towards these goals.

The trillionaire dictatorship also has one more longstanding goal, going back to Robert Malthus in 1798: reduce global capitalism’s population down to 200-300 million, the number needed today to serve as techno-feudal slave-serfs (https://chinarising.puntopress.com/2018/03/31/the-face-of-western-imperialism-exposed-by-ebola-from-china-rising-capitalist-roads-socialist-destinations/). The ongoing destruction of Europe’s economies, entrepreneurs, small-medium businesses and jobs is one half of the plan. The other is to force all their citizens to get Western GMO-sterilization Covid vaccines, to eugenically reduce the 99% population, whose operation the BLPM is steamrolling over their brainwashed citizens. Of course, WHO/CDC/Gates/Rockefeller/Big Pharma have been doing this latter genocide in the developing world for decades ((https://chinarising.puntopress.com/2020/04/18/we-call-for-investigations-into-the-bill-melinda-gates-foundation-for-medical-malpractice-crimes-against-humanity/).

Therefore, it’s our turn. We Westerners are all Africans now. 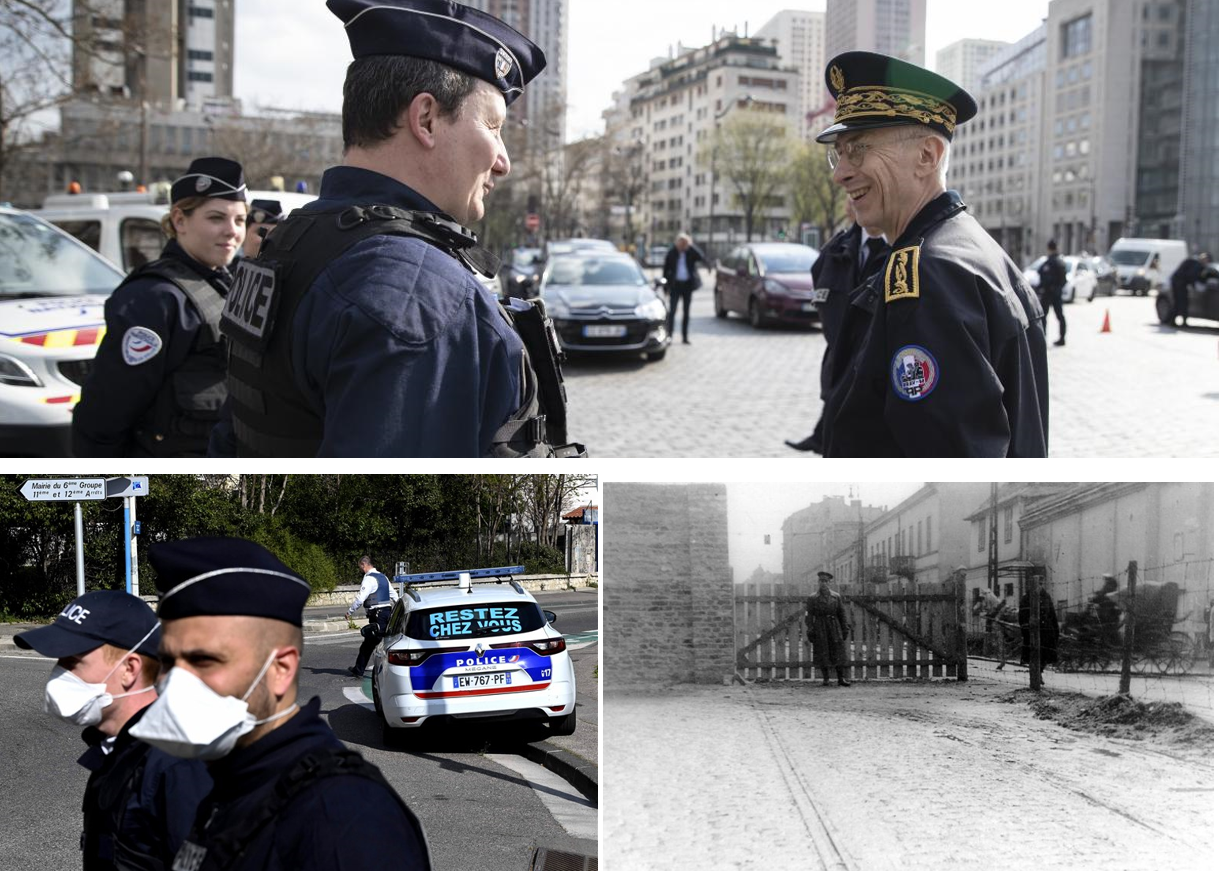 Above: the West’s Covid-Great Reset Plandemic has already turned living in France into a dystopian police state, including the aforementioned house sortie passes, as well as 7/7 curfews, lasting from 20:00-06:00 (8pm-6am). The squad car’s sign in the back screams, STAY HOME! It’s one big World War II fascist ghetto, pictured lower right.

Note: any relevant hyperlinks for further study are in the above Background and Summary.

In two recent articles, I explained and warned Westerners about the rapidly consummating Covid-Great Reset Plandemic being bulldozed over their economies and societies. First, they are using it to cause World Bank/International Monetary Fund-style “structural adjustments” to rape and plunder assets of the West’s 99%. This is to finally drive us into being property-less, jobless techno-feudal slave-serfs. Euranglolanders are simply being added to the trillionaire list of pillaged peoples in Africa, the Americas, Oceania and Asia, going back to 15th century, imperial-colonialism and the postwar Bretton Wood dictatorship, which never stopped.

Not reading/listening/watching these two posts is at your and your children’s peril,

I fully appreciate everybody’s sense of disbelief, cognitive dissonance and self-protecting impulse to compartmentalize and deny the truth, but Westerners cannot afford to crawl in that cocoon right now. At breakfast, my wife and I were lamenting that our older daughter’s trip to visit us from the US for the holidays was just cancelled, under the guise of the Covid-Great Reset Plandemic. When she WeChatted us last night with the bad news, I had a good cry and then thought about it.

It’s what Eurangloland’s oligarchs want, for everyone to submit and take it. Thus, I woke up today, ready to keep up the good fight against their ongoing fascist police state, which I’m watching happen in real time outside our windows. Next, our younger daughter is scheduled to arrive from Germany for a few days over Christmas. Can she with the Europe-wide lockdown? The Big Wheel of Life keeps on turning.

This morning, I saw visceral agony on my wife’s face. It honestly pains her mentally and physically that the trillionaire dictatorship, the richest families on Earth – Rockefeller, Carnegie, Rothschild, European royals (all who are censorially never mentioned – https://en.wikipedia.org/wiki/List_of_wealthiest_families and https://en.wikipedia.org/wiki/List_of_banking_families) – will never be satisfied with already owning most of our Pale Blue Dot and tyrannically controlling most of its peoples.

Bear in mind, what is officially listed is a drop in the oligarchic bucket compared to their true wealth, as 95% of it is hidden in pyramids of secret, offshore bank accounts, being moved around in interconnecting shell companies and blind trusts. They are trillionaires, not billionaires. Secondly, we’re dealing with hardcore psychopaths. It is well known that psychopaths are generally lazy, lie, use and abuse other people to get what they want. For the West’s kakistocracy over the last 3,000 years, this has unfortunately become their deeply entrenched modus operandi (https://chinarising.puntopress.com/2020/09/24/the-real-story-behind-usas-attacks-on-tiktok-wechat-huawei-and-zte-it-is-an-old-one-really-old-china-rising-radio-sinoland-200924/).

Especially since 15th century imperial colonialism, they haven’t been making trillions of dollars/euros/pounds, by being empathetic and promoting collective solidarity. They keep using the global power their wealth reaps them, profiting from nonstop deep state false flags, invasions, occupations, wars and the Big Lie Propaganda Machine (BLPM). History’s popularly known serial killers and rapists are small time wannabes in comparison (https://en.wikipedia.org/wiki/List_of_serial_killers_by_number_of_victims). The West’s kakistocracy is humanity’s real hall of shame serial killers, with their victims numbering in the billions. Nonetheless, using global capitalism, they continue their genocidal slaughter and socioeconomic rape, as I write.

You see, they want it all – to own and control 110% of the Solar System. Get in their way and you will be offered a choice from their imperial toolbox: bribery, blackmail, extortion or assassination. Eugenically wiping out 90% of global capitalism’s peoples, to be left with 200-300 million techno-feudal slave-serfs, using Western GMO-sterilization Covid vaccines makes perfect sense to them.

Here is the future that the trillionaire dictatorship is driving you towards:

3) to continue getting their meager minimum monthly income check,

4) while being injected with eugenic vaccines and an implanted bio-tracking chip,

5) in order to die young in one their cold, leaky ghetto slums.

The totally bogus, rabbit-from-a-hat, “out of control, new Covid strain”, turning Britain into a holiday concentration camp, is Euranglolanders’ harbinger clarion call that unless this is all resisted and defied, the trillionaires’ Covid-Great Reset Plandemic is F-O-R-E-V-E-R (https://sputniknews.com/uk/202012201081514890-uk-health-minister-new-coronavirus-strain-out-of-control-brits-need-to-reduce-social-contacts/) – wave after wave of Cavid, Kevid, Kivid, Cuvid, Covid-X, -20, -Y, -21, ad infinitum-ad nauseum.

Friends, fans and followers of China Rising Radio Sinoland, it’s game over, unless Euranglolanders start to rise up en masse, like the French and others are starting to do, to defy and resist the Covid-Great Reset Plandemic. Protests are being increasingly censored or downplayed in the BLPM. Below is some inspiration to fight back,

Time to roll up our shirt sleeves, get creative and take a stand. I’m taking nice walks during curfew, I refuse to wear a mask in public; when I have to put it on if a shopkeeper asks me to, I barely cover my mouth with it. Most importantly, I’m talking to anybody and everybody I can. It’s a start.