Pictured above: outtake from the outstanding, eponymous, full-length feature movie on the life and times of Confucius. Download the movie for free below…

Note before starting: download the English subtitled movie, for free below…

The 2-hour Chinese movie, Confucius was released in 2010 and directed by Hu Mei. The well-known actor in the star role was Chow Yun-Fat. 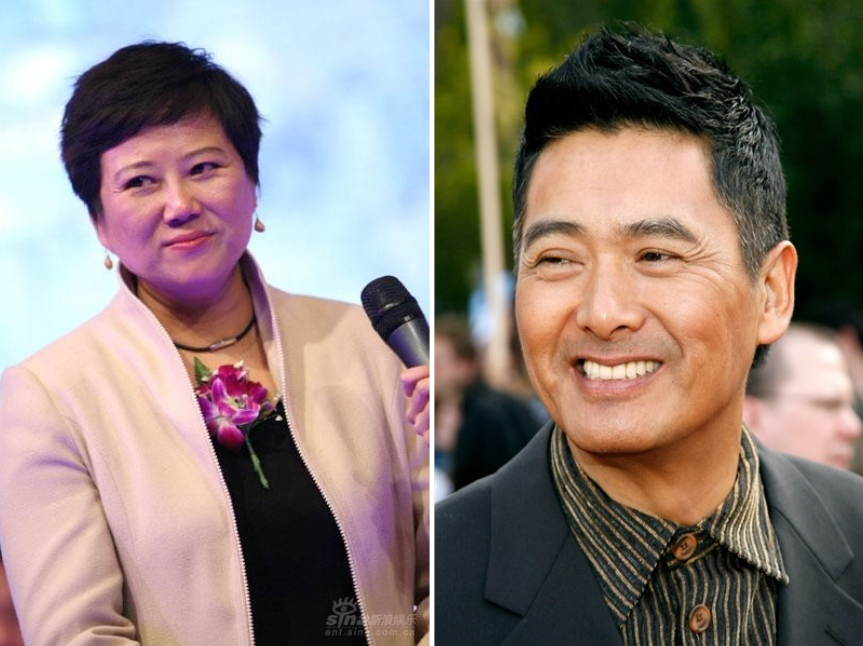 Pictured above: director Hu Mei on the left and actor Chow Yun-Fat on the right.

The segment I wish to highlight is 23 minutes long.

FROM THE SCANDALOUS PRINCESS TO ETERNITY

Confucius and Princess Nanzi of the Song Principality were both scions of the Shang-Yin Royal House (which lasted 1600 BCE-1046 BCE). 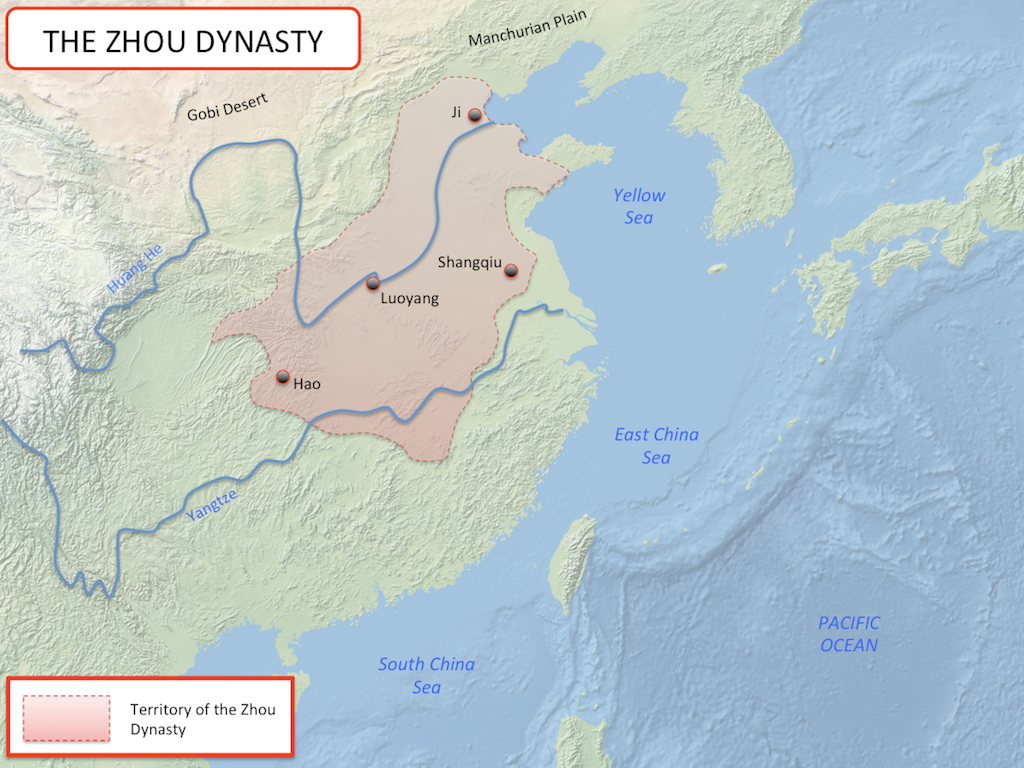 Pictured above: map of the Zhou Dynasty, in which Confucius lived. Top and bottom are the Yellow and Yangtze Rivers, respectively.

When the Royal House of Zhou (which lasted 1046 BCE-256 BCE) was granted the Mandate of Heaven, the conquered Shang-Yin Dynasty was given the Principality of Song (south of Lu, where Confucius was born) so they can keep on offering sacrifices to their ancestors. Zhongsi was the second Duke of Song. Some generations later (in 710 BCE), his offspring Kong Fujia was murdered by Hua Du, a powerful nobleman coveting Kong’s wife, and probably something more. His son, Kong Mu Jinfu fled to the Principality of Lu and was granted a rank of officer. Mu Jinfu begat Gao Yifu. Gao Yifu begat Fang Shu. Fang Shu begat Boxia. Boxia begat Shuliang He (born 614 BCE – died 548 BCE). Shuliang He begat Qiu (born 551 BCE – died 479 BCE) aka Confucius aka Kong Qiu aka Zhongni aka Kong Fuzi.

The interview happened in 496 BCE, a year after Confucius was exiled from the Principality of Lu. Confucius was living in Wei (a rich Principality west of Lu) with Yan Zhuoju, the brother-in-law of his disciple Zilu aka Zhong You (born 542 BCE – died 480 BCE). 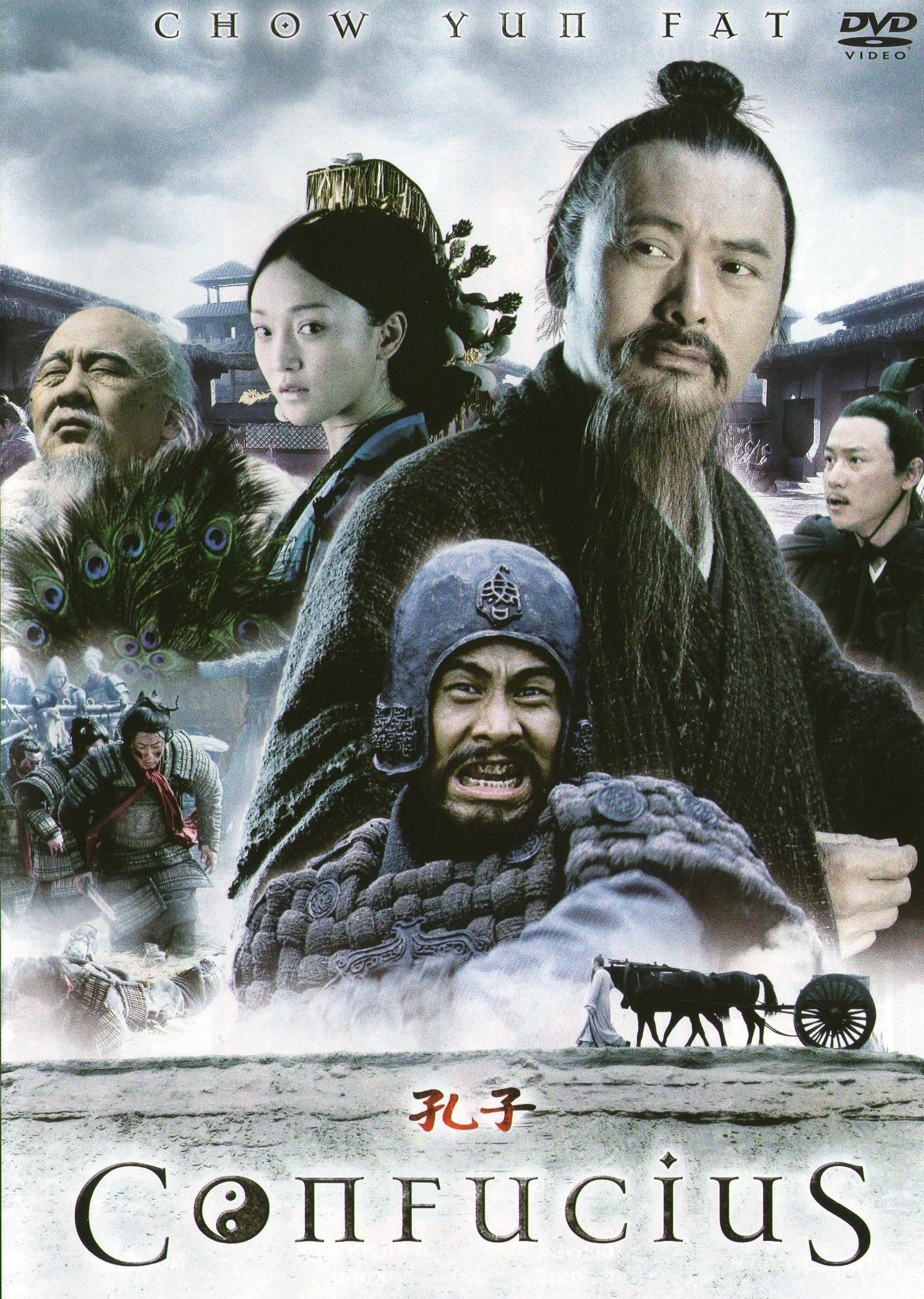 Pictured above: Princess Nanzi is such an infamous historical figure, that even on the Chinese internet, I could find no old paintings or statues of her. Above is the movie poster, where you can see actress Xun Zhou portraying the princess.

Here I would like to introduce some remarks concerning Chinese names of that time. Let us take the example of Confucius’ grandson. His name is Kong (family name) followed by his given name, Ji. Thus, Kong Ji (born 483 BCE – died 402 BCE).

However, his social name is Zisi. The element Zi means Master, not given here in the sense of a philosopher (like in Kongzi) but as the indicator of his social status. All persons belonging to the gentry and the nobility was called by social name in polite society. The given name is only used by his parents or a superior occasionally. The family name is always used together with the rank or honorific title, eg. Kong Dafu, the Grand Officer (Minister) Kong or Kong Fuzi, Noble Master Kong. So, Princess Nanzi’s social name means Mistress Nan.

Nanzi’s flirtatious attitude to her distant cousin is revealing her extravagant personality, also expressed by her dazzling outfit. She has been given to Duke Ling of Wei (reigned from 534 BCE to 492 BCE) but finding the old man not satisfactory, she asked her brother and lover Zichao to come to Wei. Both were having an affair in broad daylight. The old, enamored and forgiving Duke Ling was perfectly aware of the situation. In the Capital City of Wei, a jingle was sung: “The handsome swine of Song and the lascivious sow of Song are having fun together under the nose of our Lord“.

Chinese public opinion has a very ancient pedigree. But Nanzi was not an average incestuous hypersexual woman, she had brains and was quite an advisor behind the throne and on the throne. Historians say she was a capable leader. Therefore, with her husband being quite indifferent to the duties of a ruler, he was happy to have such a priceless wife. As well, she was capable of philosophical understanding too.

Accepting her defeat of not being able to woo Confucius, she gave him a deep bow. Unfortunately for her, the noblemen in Wei decided to put an end to her life and director Hu Mei imagined that her last thoughts were for Confucius (here, I would like to express a certain ironic, even sarcastic doubt. Director Hu took some liberties with historical facts).

Nanzi was not the victim of an occult assassination conspiracy, but was officially executed, so to speak.

Nanzi died in 480 BCE, 16 years after the interview and 12 years after her easy-going husband. She offered the throne to her son, Prince Ying but knowing his mother, he wisely refused and Nanzi chose a grandson of Duke Ling (Prince Zhe) and enthroned him as Duke Chu (first reign: 492 BCE – 480 BCE and second reign: 477 BCE – 470 BCE). In 480 BCE, her stepson Prince Kuaikui (father of Duke Chu) who has been rejected at the death of Duke Ling, because Nanzi did not appreciate him, returned with foreign aid to dethrone his son Duke Chu and on the same occasion executed Nanzi, his overbearing but extremely talented stepmother. Prince Kuaikui had a short reign as Duke Zhuang II of Wei (reigned 480 BCE – 478 BCE).

Please note that Nanzi’s distant cousin Confucius will die at 72 the next year, 479 BCE. The Sage was informed about all the events of this outlandish family melodrama, which broke his heart. Let us not forget his disciple Zilu (born 542 BCE – died 480 BCE), who was killed during a battle related to this internecine fight. 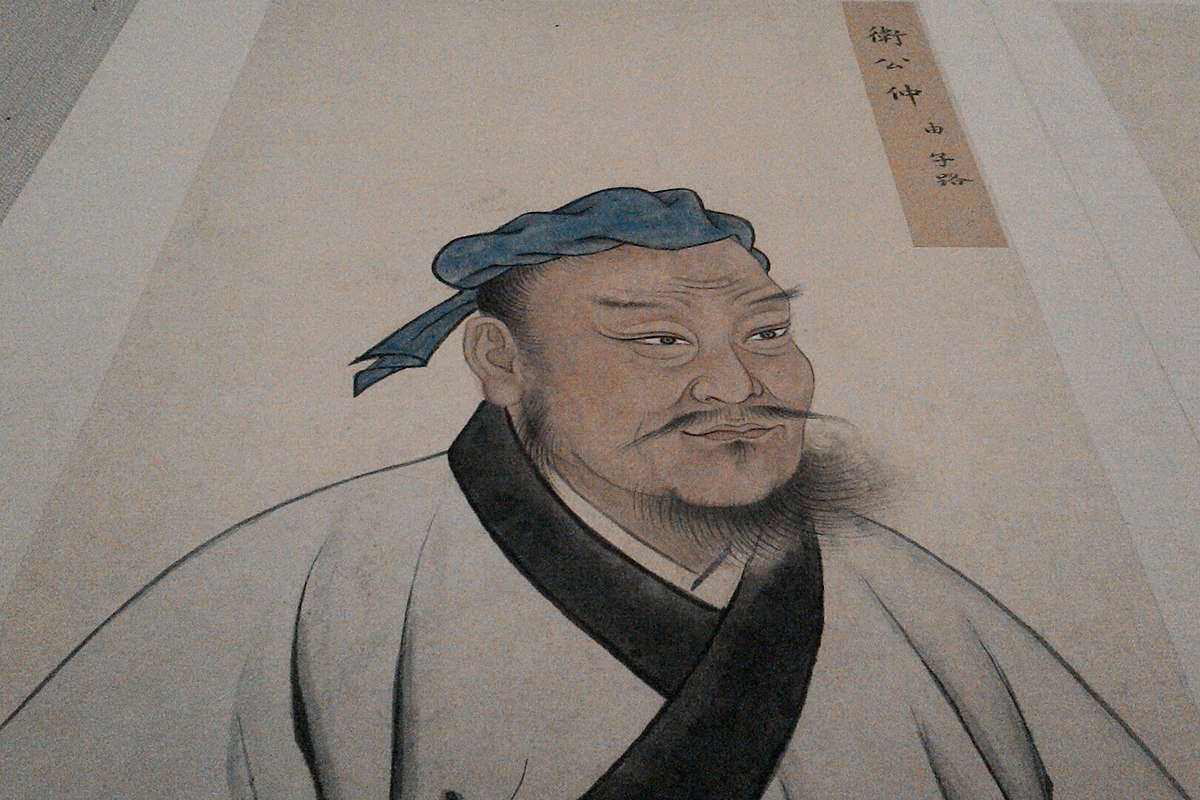 Pictured above: an old painting of Confucian disciple, Zilu.

SECOND SCENE, with many sub-scenes:

TRIBULATIONS (A, B and C)

Confucius wandered for 14 years (497 BCE – 484 BCE) from one principality to the next, in the quest for a prince capable to be guided by Principles in Affairs of State.

The Philosopher-King without a Crown was giving a lesson while minions of Commander Huan Tui of Song were chopping a tree just in front of him for intimidation purposes.

A short line from Confucius’ Analects (Lunyu: Selected Sayings) Chapter 7, Section 23 attests to that episode: “Heaven has engendered virtue in me, what can Huan Tui do to me?“

Some Taoist recluses were mocking Confucius for his lofty ideals and his quest for the Noble Prince. They tried in vain to coax Zilu to stay with them.

The movie mentions 484 BCE at 1h30’20” but I would say that for the sake of artistic tension and rhythm, Director Hu chose to compress in 12 minutes events happening between 492 BCE and 484 BCE, which is perfectly her right as an artist. I will not go into the details but will focus on two topics.

The conversation with his disciples in which they said they found him because a farmer told them that near the East Gate is a man,

Looking important, having the forehead of Yao, (mythical emperor ruling “China” more than 2,000 years before Confucius), the shoulders of Zichan, a virtuous nobleman, but scraggy as a stray dog.

This line is famous in China and within the Sinosphere. 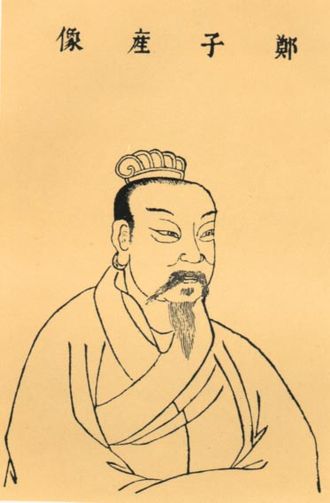 Pictured above: the great and noble Zichan.

Zichan (birth name Ji Qiao) died in 496 BCE (so he died the year of the interview between Nanzi and Confucius). He was a grandson of Duke Mu of Zheng (reigned 627 BCE – 606 BCE). Zheng was a state southwest of Wei. In dangerous times, Zichan was able to defend the sovereignty of the State of Zheng against two larger powers. He also managed to save the Ducal House from internal quarrels. He curbed the powerful families and saved the central government by a series of legal reforms, which he successfully enforced. Zichan had the new law code cast into a bronze vessel and presented it to the public in 536 BCE. It is called Zichan Xing Ding (Zichan’s Law Tripod – http://www.chinaknowledge.de/Literature/Historiography/zichanxingding.html). Confucius admired him as a member of the old nobility, while still having the chivalrous ideals of kindness and justice, a true gentleman.

The Battle of Lang in 484 BCE, fought by Lu against the invading Qi troops.

Ziyou (birth name Ran Qiu, born in 522 BCE – ?) was the victorious military commander for Lu. He thus bought the return ticket for his Master, in exile for the last 14 years.

This scene happened in 489 BCE, at the border of the states of Cai and Chen (both states south of Wei and Zheng). Confucius and his disciples were lost and almost died of hunger. 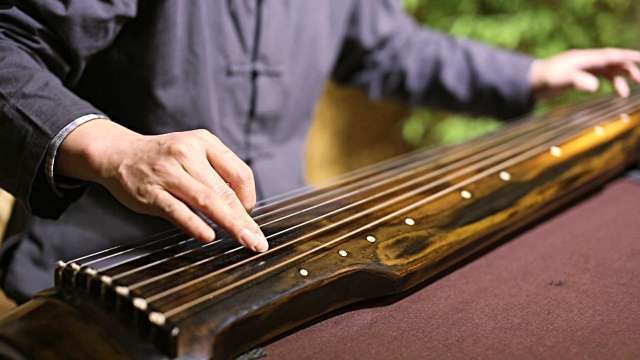 Pictured above: the 7-stringed guqin, one of China’s most famous instruments, dating back millennia.

Though Director Hu decided not to dramatize the following, it is another foundational moment of Chinese Civilization. It happened in 489 BCE, seven years after the interview between Nanzi and Confucius.

In the movie, Zilu is the bearded man lying on the ground stating he is not hungry, and to whom Confucius fed a mouthful of soup.

Now the famous and eternal exchange between them,

ZILU ASKED ANGRILY: DO GENTLEMEN HAVE TO BEAR SUCH DIRE SITUATIONS?

This full-length movie is over 1GB, so I can’t upload it here. Please download it for free from my extensive Chinese film library here,