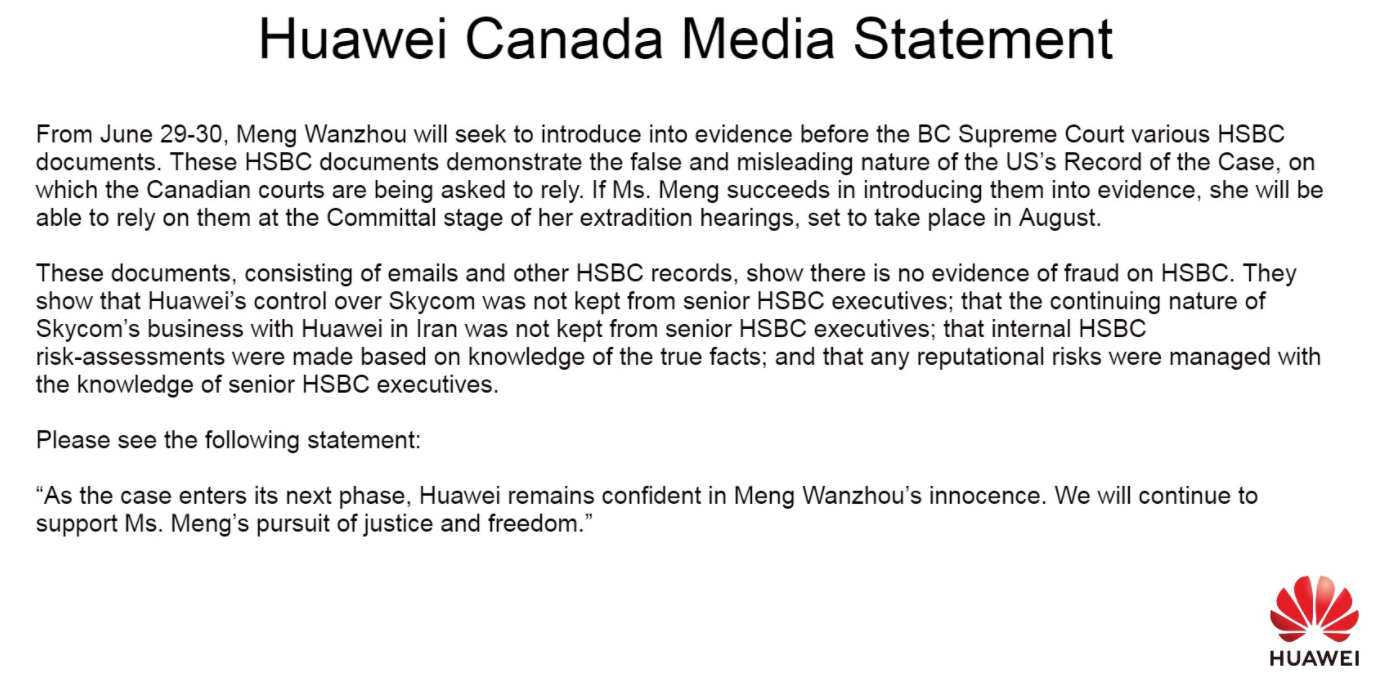 Pictured above: Huawei Canada’s just released statement about Meng Wanzhou’s ongoing, US-led detention, going back 2.5 years. Of course, Meng is innocent, but Western courts are corrupt finger puppets of the 1% elites and always have been. So, the jury is still out, pardon the pun.

Note before starting: incredibly, since Meng’s kidnapping at Vancouver Airport, 1 December 2018, HSBC has been flying totally under the mainstream radar. Not anymore. I am researching, writing and producing a thorough exposé on this infamous bank, whose creation was born out of the UK’s illegal drug cartel, 1839-1949, keeping China on its knees with opium, morphine and heroin. HSBC was there, for every contract, transaction and bank wire.

Exposé: It is not fair that Huawei CFO Meng Wanzhou landed in Canada, can’t have Perry Mason as her lawyer, nor be tried in his mythical world of “rule of law”. Such is life. China Rising Radio Sinoland 210123

This is it: Huawei CFO Meng Wanzhou’s final March kangaroo court in Canada will determine her fate and China-US relations for years to come. China Rising Radio Sinoland 210307

Explosive exposé blows the cover off Huawei Meng Wanzhou’s 2018 sting operation in Vancouver, Canada: The truth and consequences of connecting the dots.

Will the third time be the charm for detained Huawei CFO Meng Wanzhou? First, the UK High Court refused her legal team’s request to see relevant HSBC documents, since it was her now infamous PowerPoint presentation to one of their officers, bizarrely at a café in Hong Kong, when the bank has hundreds of offices in their massive skyscraper nearby, that is the basis of all the accusations (https://www.bbc.com/news/world-us-canada-57673027).

More on that in my next exposé, which will come out soon, and which will reveal everything you need to know about this incorrigible bank, past and present.

Meng’s team then made the same request to Hong Kong’s courts, which agreed that HSBC’s internal records were relevant to her (trumped up-US) extradition case in Vancouver, Canada, maybe because as Hongkongers, they know all about HSBC’s sordid history, going back to the Opium Wars and the UK’s global drug cartel, which dramatically and negatively affected China’s modern history.

Those records were just released and it is good news for Meng. When mainstream media – and lapdog vassal Canada at that – admits,

…Meng Wanzhou is detained on what increasingly look to be trumped-up, politically motivated charges.

Then you know that Uncle Sam’s big, fat finger in the imperial dike, in this case, is reaching its point of diminishing marginal returns (https://nationalpost.com/opinion/john-ivison-new-evidence-in-the-meng-case-an-opportunity-for-lametti-to-end-it).

In a related video, same said Canadian journalists predicted that the newly released HSBC-sourced documents are more than enough for Canadian Minister of Justice/Attorney General David Lametti to release Meng posthaste and if not, she will surely get released on appeal to their Supreme Court (https://www.youtube.com/watch?v=cSz2Col4Y9I). Never mind that Western justice is as crooked as a crippled dog’s hind leg, but the fact that after 2.5 years, it is being MSM-discussed is very encouraging, indeed.

So, for third time’s the charm, will the presiding judge, Associate Chief Justice of B.C. Supreme Court Heather Holmes allow evidence that is apparently what is needed to get Meng freed? She should, but the fact of the matter is,

1) this is a patently US-driven geopolitical vendetta to damage, extort Huawei and destroy China’s image in the West’s Big Lie Propaganda Machine (BLPM), and too often Empire does not know when to call it quits,

2) Judge Holmes seems to have a less than ethical reputation (https://chinarising.puntopress.com/2021/01/23/it-is-not-fair-that-huawei-cfo-meng-wanzhou-landed-in-canada-cant-have-perry-mason-as-her-lawyer-and-be-tried-in-his-mythical-world-of-rule-of-law-such-is-life-china-risi/),

3) the whole ordeal has been a kangaroo court from day one (https://chinarising.puntopress.com/2020/11/16/explosive-expose-blows-the-cover-off-huawei-meng-wanzhous-2018-sting-operation-in-vancouver-canada-the-truth-and-consequences-of-connecting-the-dots/) and,

4) Ottawa is a weak, step-and-fetch-it for Washington,

Which means anything could happen, for better or for worse, concerning Meng.

Without going into a lot of detail, the internal HSBC emails, memos and other documents demonstrate that Meng did not lie or commit fraud in her coffee table presentation, which was surely a set-up at the behest of the US Departments of Justice and Treasury (https://chinarising.puntopress.com/2021/03/07/this-is-it-huawei-cfo-meng-wanzhous-final-march-kangaroo-court-in-canada-will-determine-her-fate-and-china-us-relations-for-years-to-come-china-rising-radio-sinoland-210307/). Why? Because we now know that HSBC, up to high level management, already fully knew everything Meng said that day. How is it fraud if the information shared is fully known by both parties? One has to be duped, tricked or lied to, for there to be fraud.

Again, MSM is now singing the same – what should be obvious – song,

But if the entire case rests on whether Meng misled HSBC, how could the judge not consider documents that suggest the person at the bank responsible for weighing sanctions, money laundering and fraud was well aware of Huawei’s relationship to Skycom and still recommended the reputational risk was acceptable?

If executives higher up the HSBC greasy pole were not aware, that would appear to be an internal communications issue, not fraud (https://nationalpost.com/opinion/john-ivison-new-evidence-in-the-meng-case-an-opportunity-for-lametti-to-end-it).

Prime Minister Justin Trudeau, whom my Canadian friends roundly mock as a spineless pretty face, talked tête-à-tête with US President Joe Biden, during the recent G7 meeting. Did they talk about Meng’s case? They must have, since Trudeau stated beforehand that he intended to discuss Canadians being tried in China on charges of espionage, the “Two Michaels”, Spavor and Kovrig. For Canadians, their arrest and court cases are simply Baba Beijing’s quid pro quo, diplomatic riposte to Meng’s previous kidnapping, but how deceived they are. It is not the same thing, as I’ve reported (https://chinarising.puntopress.com/2019/02/04/canadian-recently-arrested-by-baba-beijing-works-for-the-soros-cia-front-group-icg-china-rising-radio-sinoland-190204/).

Is true justice for Meng Wanzhou a possibility, in such a tawdry cesspool of Western connivance and corruption, which is being played out on Empire’s geopolitical chessboard? Is there light at the end of her nightmare tunnel?