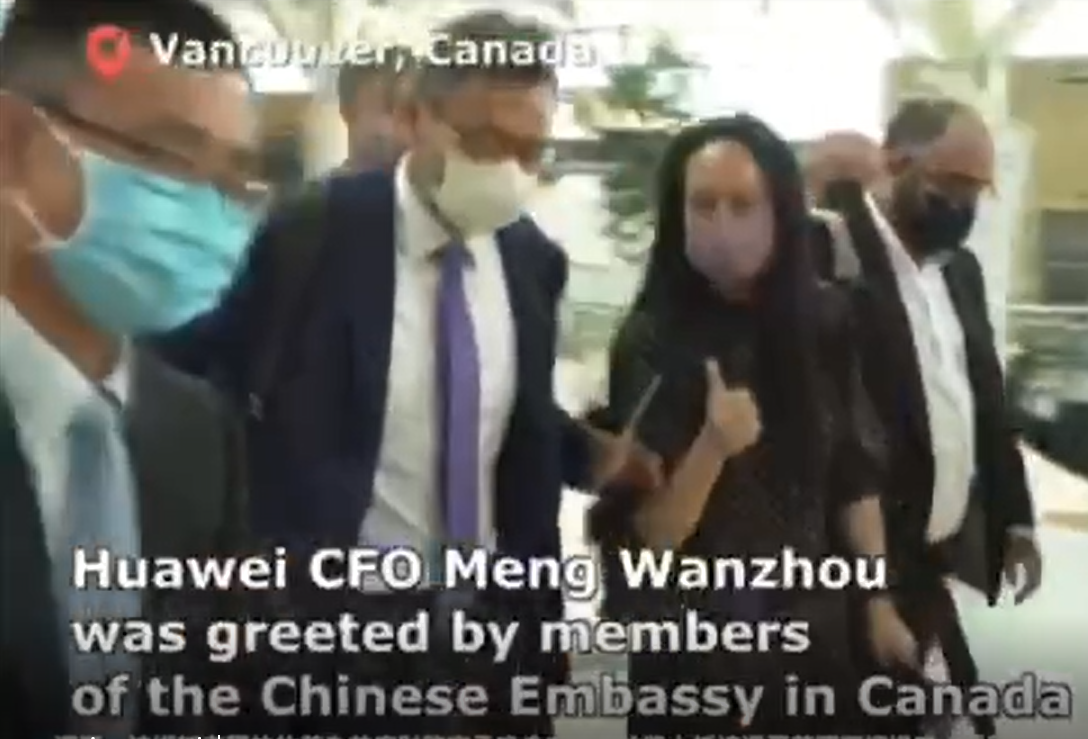 Pictured above: it must have surely hurt Canada’s sense of imperial importance, by not being included in the September 15 US-UK-Australia anti-China alliance called “AUKUS”; as well Justin Trudeau just got re-elected Prime Minister. Why not a little revenge and force the return of Meng?

Audio podcast can be downloaded at the end of this post,

Franklin Deleanor Roosevelt wrote in his private letters that nothing in politics, and we can add geopolitics, happens by accident. Who, when, where and how is always predetermined because of the hidden why.

On 15 September the USA, UK and Australia announced a very controversial anti-China alliance, abbreviated AUKUS. This was not only unexpected in China, but it was also a big surprise all across Europe as well. However, Canada is a member of the Five Eyes espionage alliance, comprised of the Anglo-Saxon United States, Canada, UK, Australia, and New Zealand. We can forgo New Zealand, since it is the smallest member of the group and has always been considered eccentric compared to the rest. After all, since 2012, they have not bent to Uncle Sam’s directives to extradite Kim Dotcom on bogus charges of racketeering.

Nonetheless, Canada being the USA’s next-door neighbor and a loyal, vassal lapdog for Washington, likes to think it can punch above its weight. Being a privileged member of Five Eyes, it is more than likely that Canada got a whiff of what was coming down the pike as far as the AUKUS anti-China alliance is concerned. Did they protest behind closed doors for being snubbed?

The one issue that remained was the national election for Prime Minister, which took place on 20 September. Justin Trudeau won, but lost ground versus his party’s competitors. On 16 October 2021, there was a scheduled inter-ministerial meeting, where Huawei CFO Meng Wanzhou’s nearly three-year judicial travesty was grinding on in Vancouver, Washington and in the Big Lie Propaganda Machine (BLPM). As I recently wrote, even mainstream journalists were beginning to say,

Enough is enough, let Meng go and get back the Two Michaels, who are imprisoned in China.

It is no secret that the US Department of Justice (USDOJ) has been in discussions with Meng and her legal team for at least a year, to get her released and not be extradited. As is always the case, it is a question of on what terms. Earlier, I reported that USDOJ was insisting on a Deferred Prosecution Agreement (DPA – https://chinarising.puntopress.com/2021/09/04/expose-hsbc-is-the-800-pound-gorilla-in-the-canadian-courtroom-that-no-one-is-talking-about-the-judicial-incubus-weighing-on-huawei-cfo-meng-wanzhous-shoulders-china-rising-radio-sinoland/), which essentially makes you a snitching, framing-up whore for Uncle Sam for five years, for the latter to attack and arrest the deep state’s many enemies. It goes without saying that Meng refused and offered her much more lenient conditions. Therefore, it is not out of the question that once Trudeau got reelected, Ottawa told Washington behind closed doors,

Thanks for screwing us over in AUKUS. We’re loyal and faithful to you. We’ve even taken huge heat and destroyed our credibility by kidnapping and locking down Meng for the last three years. We’re pissed, therefore, we’re going to release Meng NOW, whether you like it or not.

At that point, USDOJ could have called Meng’s lawyers and said,

You know your soft terms to get Meng released? We accept them unconditionally and we’re in a hurry. Shall we quickly write up an internal protocol?

To which Meng and Company would have said,

Meanwhile, of course Canada had been in constant contact with Baba Beijing, about getting the Two Michaels released. Ottawa could have called Beijing and said,

If we release Meng unconditionally on her terms in the next few days, will you release the Two Michaels?

To which Baba Beijing would have replied,

Sounds good to us. It’s a deal.

Why? The Two Michaels were caught red-handed spying in China and DPRK. Baba Beijing had surely gotten everything they wanted out of their cases, including their networks, collaborators and modus operandi. Last month, Michael Kovrig was sentenced to 11 years in prison and Michael Spavor was not far behind. Kovrig’s harsh sentence was a very public warning to all other foreign businesspeople to think twice before trying to be a patriotic hero or James Bond. Thus, it was a great time be magnanimous and show Chinese soft power to the rest of the world.

At which point, Canada and the USA likely brushed over the AUKUS snafu, coordinated the BLPM announcement and Meng was set free, as if it were big, bad, imperial bully Uncle Sam who was making all the decisions.

Will we ever know the truth? Time will tell.

PS: if you have not seen/heard/read my short statement on Meng’s release, it is an excellent quick review,

3 thoughts on “Was Huawei CFO Meng Wanzhou set free by Ottawa, because Canada got snubbed by the USA for its controversial anti-China alliance with the UK and Australia, “AUKUS”? Trudeau just got reelected PM. The plot thickens. China Rising Radio Sinoland 210928”