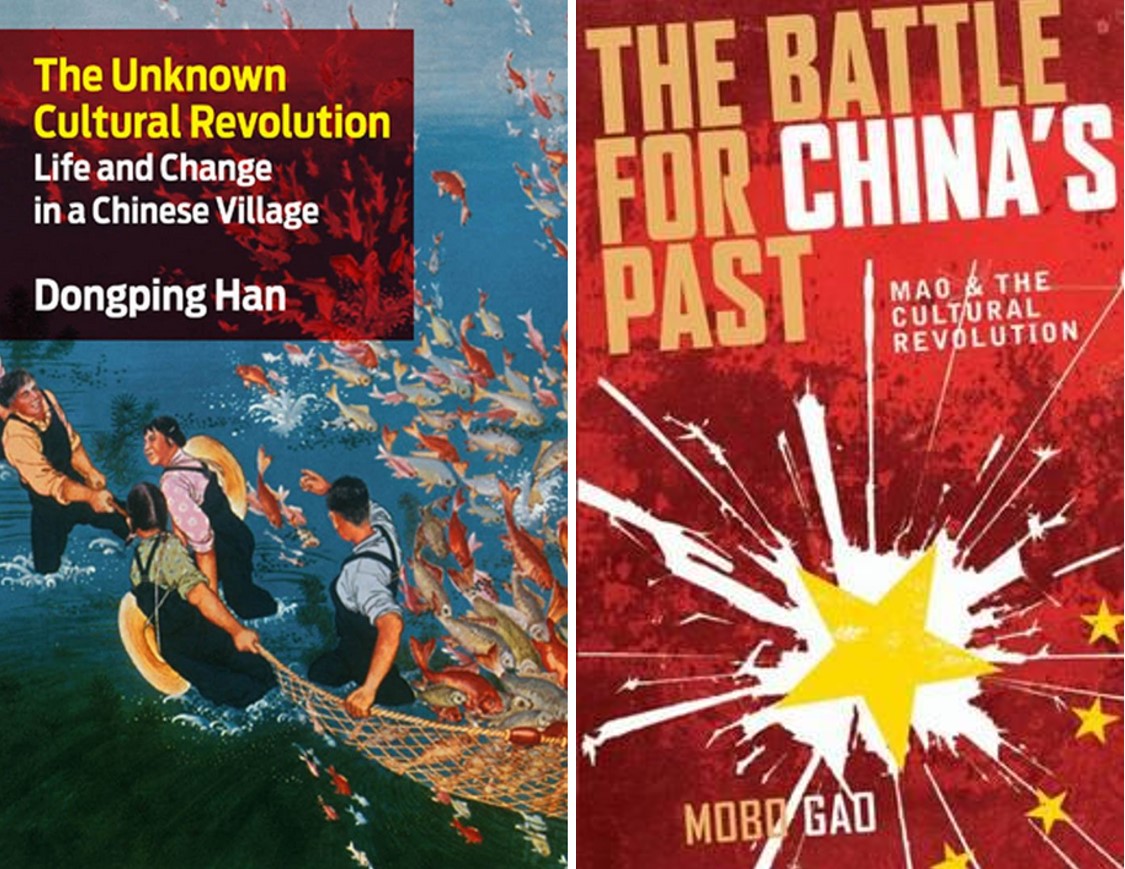 Pictured above: want to know about the Mao Era from people who grew up throughout that amazing period? Read the books by Mobo Gao and Dongping Han, both of whom I’ve interviewed.

A towering beacon of freedom and democracy, YouTube is blocking me from uploading videos. Please boycott it and from now on, subscribe and follow me on Brighteon above.

Frank Dikotter’s new book coming out next month, called “China After Mao” and like all his other past screeds, can be used to line your cat litter box, keep as fireplace tinder, or turn into garden compost.

Dongping Han, professor at Warren Wilson College in North Carolina, USA, whom I’ve interviewed on my show, exposes Dikotter for what he is: a very well-paid, phony researcher and hopeless fabricator of the worst lies. Dongping sent me this,

Frank Dikotter used Life magazine photos from 1947 as the front cover and inside his book, “Mao’s Great Famine”, on the Great Leap Forward in 1958-1960.   After my friend from Malaysia alerted me, I confronted him with an email, and he replied that he had to, because he could not find any photos about the (supposed) Great Leap Forward famine. There was hunger, but no famine, so of course he could not produce any photos for something that never happened. What a shameless fake!

In his book, “Mao’s Great Famine”, he claimed he had documents to prove that Mao wanted to starve half of the Chinese people to death, so the remaining half would have more to eat.  I asked him to show the documents.  He first said that he had an agreement with the source that he could not show it to anybody.  I replied that was bullshit.  Eventually, he said that I could come to his office during his office hours to see it. Knowing I was in the US, he probably felt sure I would not fly to Hong Kong to see it.

But, I have colleagues there! One of my friends in Hong Kong went to see him on my behalf, and got a copy of the document.  It turned out that the document was just the opposite of what Dikotter claimed. The document said that Mao wanted to cut industrial investment projects in 1960 by half, so that the remaining half could be completed in time with adequate funding, nothing about starvation, because there was none. This is a guy who claims that he understands the Chinese language.

His book is filled with complete and total  shit.  Nevertheless, because he is anti-Mao and anti-China, he was funded with two and half million dollars from the Chiang Ching-Guo Foundation in Taiwan to lie to all of humanity, and all his books have been on the New York Times Bestseller List.

Why are all of Dikotter’s books bestsellers? That’s because they are football field-sized tissues of lies, fabrications, bogus data and rigged statistics, wrong dates, names and places, that he just pulls out of his ass. Dikotter is a rich media whore, who is Sinophobic and a rabid, foaming-at-the-mouth McCarthyite anti-communist. The Taiwanese Chiang Ching-Guo Foundation was founded by Chiang Kai-Shek’s only biological son and like his father, was a brutal Kuomintang/KMT fascist until his last breath. The same KMT that Mao and the Chinese people ran out of the Mainland in 1949.

An $86 million endowment started this China-hating foundation, from Taiwan’s Ministry of Education and wealthy anti-China donors. That is a lot of money to buy Big Lie Propaganda Machine (BLPM) anti-China vomit to barf across the world. Some bodies, like the University of California at Berkeley turned down this Taiwanese pimp money. Not Dikotter and too many others (https://en.wikipedia.org/wiki/Chiang_Ching-kuo_Foundation).

Mobo Gao, professor at the University of Adelaide in Australia, whom I’ve also interviewed on my show, added to Dongping’s comments,

In my book, “Constructing China”, I have one chapter on the GLF and on pages 178 to 182, I have analyzed what Dongping here says about Dikotter.

Dongping wrote the book, “The Unknown Cultural Revolution”, Mobo wrote “The Battle for China’s Past” and “Constructing China”, and they both contributed to “Remembering Socialist China: 1949-1976”. I’ve read them all. Both grew up in poor, isolated villages during the Great Leap Forward, 1958-1960 and the Cultural Revolution, 1966-1976. They were there, they lived through the Mao Era.

If Dikotter, who is nothing more than a well-paid presstitute and a pathological liar, was publishing the truth, then surely Dongping and Mobo would hate Mao with a passion, especially now that they are leading successful and comfortable academic lives in the West. Yet, that’s not the case.  Check out our interviews on China Rising Radio Sinoland and read their books to get the honest, boots-on-the-ground reality of the Mao Era. Links provided below.

You can be guaranteed that their books will not see the light of day on the New York Times Bestseller List, because it is a well-paid presstitute too! All of the MSM is. The BLPM is one, big harem of whores (https://chinarising.puntopress.com/2020/07/13/transcript-presstitutes-in-the-pay-of-the-cia-a-confession-from-the-profession-book-interview-with-john-paul-leonard-and-andrew-schlademan-china-rising-radio-sinoland-200214/)

Their interviews and other work on China Rising Radio Sinoland,

2 thoughts on “Frank Dikotter is exposed for what he is: a very well-paid, phony researcher and hopeless fabricator of the worst lies. Here’s proof. China Rising Radio Sinoland 221026”