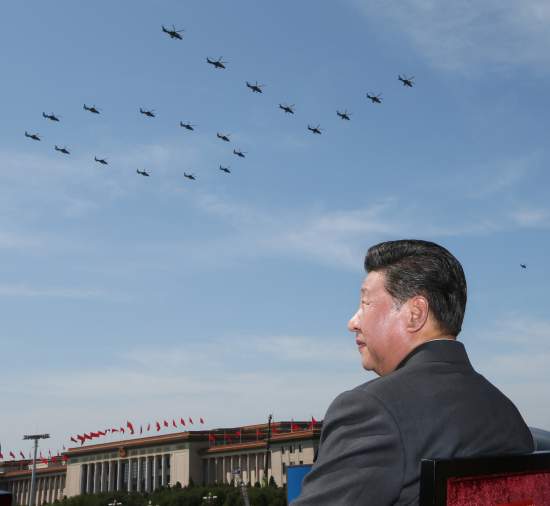 Pictured above: while Japan joining with the USA in a war with China would cause headaches, China has the upper hand. Here is Chinese President Xi Jinping watching the 70th anniversary parade on Tiananmen Square, Beijing, for China’s National Day in 2019, which showed off the country’s military might. CC0 / /
Subscribe
International
India
Africa
Ekaterina Blinkova e.blinova@sputniknews.com
US President Joe Biden is due to meet Japanese Prime Minister Fumio Kishida at the White House on January 13 to discuss North Korea, Ukraine, China’s tensions with Taiwan, and a “free and open” Asia-Pacific, according to the White House. What message does this summit send to Beijing?
“The Biden-Kishida meeting is aimed at discussing concrete steps to solidify the key role of the Japanese-American alliance in the ‘web of coalitions’ built around Beijing, into which Australia, Great Britain, South Korea, and some of the ASEAN powers have joined already,” Oleg Paramonov, senior researcher at the East Asia and SCO Research Center at the Moscow State Institute of International Relations, told Sputnik. “At the same time, space, cyberspace, value chains, free trade zones, technological standards, etc. are becoming new ‘battlefields’ in addition to the ‘classic’ military tools.”
Paramonov highlighted that in contrast with the previous “two-plus-two” talks between US and Japanese foreign and defense ministers in Washington, which was largely focused on military affairs, the forthcoming meeting’s scope is expected to be much broader.
In particular, Tokyo hopes to raise the issue of the US return to the Trans-Pacific Partnership agreement, which was unilaterally torn up by Joe Biden’s predecessor, according to the researcher. Nonetheless, military issues will play an important role at the summit, he added.
“In particular, the American president is interested in the details of the synchronization of the American strategy in the Indo-Pacific region and Japan’s plans to give the Self-Defense Forces new military capabilities, which were announced in December by Tokyo in new documents (National Security Strategy, etc.),” Paramonov said.

Tokyo’s post-WW2 security policy was regarded as largely pacifist, as it capped the country’s defense spending at about 1% of GDP and downgraded its offensive capabilities. However, over the last decade Japan has been gradually revising its military strategy.
Last month, the nation unveiled a bold new military plan that envisages doubling its defense expenditures within the next five years. The new funding, amounting to roughly $320 billion, is set to ensure Japan’s largest military build-up since the Second World War. In particular, the new strategy includes the acquisition of Tomahawk cruise missiles from the US, and the development of Japan’s own hypersonic weapons.
“Japan’s postwar pacifist, then self-defense constitution has slowly been debauched over the last 20 years at the insistence of Uncle Sam, of course to add pressure on China,” Jeff J. Brown, author of The China Trilogy, editor at China Rising Radio Sinoland, and curator of the Bioweapon Truth Commission, told Sputnik. “Having Japan involved in a theater war with China would greatly complicate Beijing’s planning and strategies.”
According to Brown, Japan changing its laws and constitution to have an offensive military weighs heavily on China’s memories. Japan’s Imperial Army “brutally occupied China during the first half of the last century and will not allow a repeat scenario,” the author underscored.
Still, Brown emphasized that China is a hard nut to crack: “China has the region’s biggest army and air force, the largest and most sophisticated missile arsenal, including hypersonic ICBMs, and the world’s largest deepwater navy, all of which have supply lines measured in hundreds of kilometers, whereas the USA has to bring its military 11,000 km across the Pacific,” he said.

The Biden administration has been escalating tensions with China over the past few years on multiple fronts. Joe Biden’s repeated “blunders” with regard to the US’ readiness to “protect” the island of Taiwan coupled with former House Speaker Nancy Pelosi’s controversial trip to Taipei last year rang the alarm bells for Beijing.
On January 8, China’s People’s Liberation Army (PLA) held military exercises in Taiwanese waters and airspace in order to test the combat effectiveness of Chinese troops, said Shi Yi, spokesperson for the PLA Eastern Theater Command. The island is seen by Beijing as an inalienable part of China. According to Brown, in the event of a conflict with China, the US will be eager to throw Japanese soldiers into battle to serve Washington’s interests.
Meanwhile, Japan is constructing a new military base in Kagoshima Prefecture. The nation’s government is planning to build runways and ammunition storage facilities on Mageshima island within two next years. The new base will serve for the relocation of the practice site for US fighter jets from Iwoto island.

“While no additional US troops are expected to be stationed in Japan, existing US military capabilities in Japan will be adapted for use in Taiwan Strait crisis scenarios,” Paramonov said. “In particular, it is planned to create highly mobile units on the basis of the already existing Marine Corps contingent, designed to protect the so-called ‘remote territories of Japan,’ the safety of which Tokyo is very afraid for because of their proximity to Taiwan.”

In addition, the Americans are seeking to strengthen the capabilities of their Marine Corps located in Japan by equipping it, in particular, with anti-ship missiles, according to the Russian researcher.
“The creation of an air force training base in Kagoshima Prefecture indicates that the allies are planning to ‘move’ their aircraft closer to the Taiwan Strait,” Paramonov underscored. “As for plans to purchase new weapons from the United States for the Self-Defense Forces, it is expected that at the summit, Kishida will raise the issue of Washington’s supplies of Tomahawk missiles capable of reaching China (timing, delivery volumes, etc.).”
According to the Russian scholar, the forthcoming US-Japan summit will pour more gasoline on the flames of the already fragile regional security environment. He noted that both Beijing and Moscow are concerned not only about a possible escalation in the Taiwan Strait, but also Japan’s recent military buildup and revision of its post-WW2 defense strategy. These developments contradict the spirit of the Japanese constitution, which has become an important element of the regional status quo, the researcher concluded.

Do yourself, your friends, family and colleagues a favor, to make sure all of you are Sino-smart:

44 Days Backpacking in China: The Middle Kingdom in the 21st Century, with the United States, Europe and the Fate of the World in Its Looking Glass https://play.google.com/store/books/details?id=YBKHEAAAQBAJ

Praise for The China Trilogy: