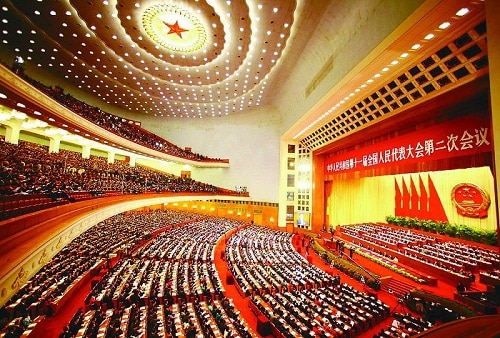 Pictured above: Great wide angle shot of Cbina’s National People’s Congress in session, in the magnificent Great Hall of the People, on Tiananmen Square in Beijing. This was the second plenum session of the 11th Party Congress

Later this week, I will be writing a full analysis of Xi Jinping’s historic keynote speech that opened the Communist Party of China’s 19th Congress. It is truly an open declaration of war against Western capitalism and its Orwellian “Rules-Based International Order” (sic). At least that is how imperial Washington-London-Paris will take it.

You got the scoop here. I managed to get a copy of the full speech in English, before it comes out officially on Xinhuanet, after the congress. Just click on the Chinese link below to get the PDF file opened or downloaded.

Much more later this week. Everything in the world will change after the 19th CPC Congress and knowing Baba Beijing, much faster than you think.