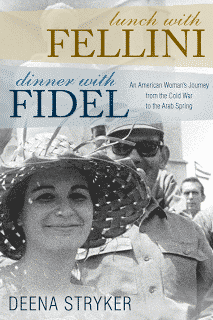 The overriding sensation in reading Deena Stryker’s amazing autobiography, Lunch with Fellini, Dinner with Fidel, is one of pinching yourself,

Can this all be true?

Why isn’t she well known, on TV and in the press?


The answer to the first question is a resounding yes. Ms. Stryker’s Fellini-Fidel is simply too good of a yarn to be made up. For the second question, I think I have the answer to that one. Read on.

Not many American children get to take off on a steamship at the age of 14 to live in Europe, but this experience is the cultural and political launching pad that sets into orbit her incredible life story. If you are keeping count, she doesn’t come back to live in the United States for another 24 years. It is during this nearly two and half decades that the bulk of her autobiography takes place, in what some would say, is her fairy tale life of adolescence and early adulthood.

First though, she critically introduces us to her early upbringing. Reading about Ms. Stryker’s childhood only confirms in my mind the belief that almost all of us have conflicted first years and grow up in what armchair and professional psychologists like to call dysfunctional families. We can forget about Leave It to Beaver and Father Knows Best, and like the rest of us, hers was reality based. Case in point: a larger than life, fearful, domineering father, an aloof, emotionally detached mother and the usual travails and misgivings of less than ideal stepparents. Ms. Stryker convincingly shows how her early life helped mold and define her emotionally and spiritually. These themes, with the specter and memory of her maternal grandmother in the background, are the fateful lubrication for many of Deena Stryker’s decisions, which help to make her life story such a riveting one. This is not what Deena Stryker’s childhood was like, no, not at all. (image by tvshowondvd)

Using literary themes of a book, we can say that her childhood sets the mood of the story throughout. Furthermore, her family members, like for so many of us, necessarily and often play the roles of antagonists, which is thus the case in Fellini-Fidel’s engrossing plot. They keep coming back throughout the book, either in person or in memory, to create many of the story’s conflicts. Needless to say, Ms. Stryker plays to perfection the leading role of protagonist and there are other white hats who join her, to help round out the story.

The other key juxtaposition that is so critical to her tales of travel, adventure and celebrated encounters is her story’s setting, which in this case is two wars and a revolution. First, Ms. Stryker’s ocean liner arrived in postwar Europe, 1947, where she commences to live in West Germany and later Paris. Much of the Old Continent still lay in ruins. Her father was a journalist and like many in this profession, moved around quite a bit, so from the very beginning, she gets to see postwar Western Europe being rebuilt. The other war that continues throughout her fast paced existence is the Cold War and with it, its Communist revolution, both in Europe and Cuba. Deena Stryker gets to not only live the rebuilding and rise of postwar Western market economies, but has the enviable position of being able to compare this with an ascent of a clearly different hue: the rival planned economies of the East. As she gets older, this reflective comparison is something which deeply affects her philosophies and viewpoints on life.

Through it all, she travels around Western Europe, moves to Rome, learns Italian fluently, works as a model and freelance journalist, has a lengthy and emotionally rich love affair with a married businessman there and over many months, establishes a job as Frederico Fellini’s press agent, for the filming of his magnum opus, 8 ½. During this part of her story, we gain many fascinating and detailed insights into the thoughts and work habits of one of cinema’s greatest geniuses, who is sadly not well known across the Atlantic, and therefore tragically unappreciated, at least among America’s hoi polloi.

Her fluency in French gets her a job with the celebrated, inspired-People magazine, Paris-Match, to go to Cuba where, through grit, patience and determination, she interviews Fidel and Raul Castro, Che Guevara and other luminaries of the island’s revolution. While Ms. Stryker could easily write an inside story book about her professional life with Fellini, she has justifiably written an account of her unbelievable and gutsy Caribbean exploits, in Cuba 1964: When the Revolution Was Young (2013, Amazon). While in Cuba, Deena Stryker falls in love with a Polish economist, whereupon they move to his home country and start a family. During this portion of her gripping life story, she remains behind the Iron Curtain, loses this relationship, moves to Budapest, falling in love with a Hungarian and having her second child, another son. Ms. Stryker’s observations about life in the Communist world, both in Cuba and Europe, are unique and very worthy of consideration. This is especially true for genuflecting, reactionary Westerners, who prove Pavlov’s behavioral theory every time they hear those frightening words that start with a capital C. She discusses many positives about life in a planned economy, especially Cuba’s miraculous educational and medical sectors, but she does not gloss over the predictable negative aspects either. In essence, and she has a very good point, the Communist revolution started out with much hope and got off to a promising start, but sclerotized and did not adapt internally, in order to keep up with the evolution of humanity’s fast paced, economic and technological 20th century. Charles Darwin’s irrefutable biological theories work equally well in many other disciplines, including economics: adapt or go extinct. This is a bad, bad book and will give you warts if you touch it. Just ask the American government. (image by Deena Stryker)

This brings us to the second question mentioned at the beginning of this review: why is Deena Stryker, whose incredible life she has shared with the world, living in obscurity? I think the answer is obvious – she is shunned for doing the unthinkable in the eyes of the West’s and particularly America’s official narrative – she traded with the Red Enemy, went to the Dark Side of the Washington/London/Paris consensus, and this act of defiance and independence cannot be countenanced. If Ms. Stryker had a similar, but Ayn Randian adventure of wealth accumulation to tell, in the crucible of libertarian capitalism, she would probably be making big bucks in some ersatz, corporate funded think tank. Too bad for her bank account that her book is not titled, Lunch with Reagan, Dinner with Obama, then she’d be a gazillionaire darling of the Princes of Power and Wall Street, and be featured on Fox and CNN. OK, maybe not MSNBC, but still. Deena Stryker spent too much of her life in the Red and not in the Green for the Washington/London/Paris consensus, trading with the enemy. (image by th06.deviantart.net)

The last quarter of Fellini-Fidel recounts her eventual return to the United States, ironically to take care of her aging and then dying mother. Given her unhappy family upbringing, this is a selfless and noble act of filial duty, which many other children in the same situation would likely avoid. She also proves wrong Thomas Wolfe’s literary adage, You Can’t Go Home Again, where today she is still living in Philadelphia and extremely busy writing books and keeping a regular and worth-following blog (www.otherjonesii.blogspot.com/).

This closing section of Fellini-Fidel gives the author space to reflect on her you had to be there life story and it is here where Ms. Stryker lays out for the reader her sage and empirical philosophical manifesto on the human condition. She spent years doing research, reflection and much reading, to watch it all coalesce on the final pages of Fellini-Fidel. Those who have led a perambulating life around the planet will smile with appreciation about how much all of these geographical itinerations can mold and shape one’s outlook on life. For all readers, homebodies or otherwise, we are lucky that we didn’t have to be there after all; we can simply live Deena Stryker’s incredible, intimate and inspiring autobiography, Lunch with Fellini, Dinner with Fidel, vicariously instead.