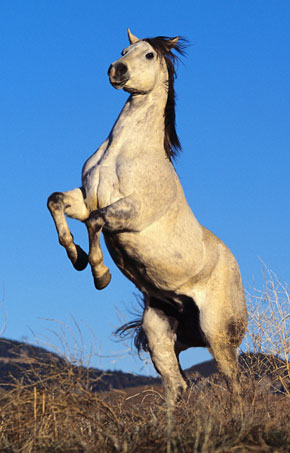 Pictured above: my fictional Beige Spirit looks a lot like the I rode during my adolescence, on the family farm in Oklahoma. His name was “Buph”, as in “Buff”. He was one ornery horse!

I submitted my first every fiction work, Beige Spirit to a China writers’ collective. They liked it a lot but thought it was too long and the beginning too slow. This is the shortened version, revamped to only 1,000 words. This even got shortened to 840 words, in the final, published version III, also posted (https://chinarising.puntopress.com/2014/09/06/beige-spirit/):

By now, Xiao Ding’s shirt was blood soaked down his back and chest, from where his big, tall gelding horse, Bìqī (哔气= Beige Spirit) had viciously bitten him on the top of his shoulder. All of his adrenaline charged salvos pumped red ooze out of his bite wound just that much more. Xiao Ding did not want his father’s or anybody’s help. He knew this was the moment of truth. Either he was going to finally be the boss of this infernal beast or he was going to spend the rest of his days afraid to turn his back on Beige Spirit, for fear of being kicked, bitten or worse. Xiao Ding could see all his fellow villagers were watching him and whispering furiously among themselves, as people are wont to do, when a memorable pubic event is unfolding before their eyes.

Rural Chinese houses often have stacks of long wood and branches stacked up flat or straight up in the air, leaning against an outer wall, to be used in household wood stoves for cooking and heat. Without asking, Xiao Ding, silent and red faced, staggered over to a nearby woodpile and picked out a long branch he could hold like a handle. It was about two meters long. With everybody transfixed on what was happening, the gathering crowd fell mute as Xiao Ding, with the fury of the humiliated and tormented, raised up the long stick like a bat and proceeded to beat Biqi, over and over,

BAM! BAM! On his haunches.

WHACK! WHACK! Across his body.

THUD! THUD! On his neck and,

CRACK! CRACK! Across the shocked and stunned animal’s head and muzzle.

Exhausted from all the emotion and physical exertion, Xiao Ding fell to his knees, his lean, youthful chest heaving for oxygen, and dropped the wooden weapon to the ground. Beige Spirit’s ears were no longer pinned back on his head; his malicious, dark eyes were flat and emotionless. Biqi knew who the master of their relationship was now. The pendulum of power had swung in the other direction for the last time. The village folk didn’t quite know how to react. A few scattered murmurs telegraphed through the throng. Mr. Ding came forward, helped his son up and beaming with fatherly pride, walked him home to dress his wound. A nearby rural nurse sewed up his bruised, black wound with 13 stitches, the same number as his age. It was 1990, the Year of the Sheep, a Mongolian national icon. Symbols mean much in Chinese society, especially in the countryside.

Xiao Ding was only an adolescent, yet he could sense that his long battle to finally master Biqi, had some parallels to his parents’ deep, dark struggles. It was only until the next Year of the Sheep, 2002, did they begin to tell him their stories in hushed whispers, heads down, staring blankly at the floor.

Xiao Ding’s parents were members of a fateful Chinese generation, the World War II era babies. They took it in the gut during the Great Leap Forward, then managed to survive the soul searing Cultural Revolution.

The first tragedy happened when they were adolescents, the mass starvation of 1958-61. Till the day they died, they dreamed darkly of the skeleton racks that their family members and neighbors became, many of whom did not see the Great Leap Forward’s famine end, only its mass hysteria and official governmental delusion. Elders sacrificed their bodies to make sure their younger ones had what was available to eat. Years later, Ding’s parents told him their lack of nutrition during those critical years of teenage growth adversely affected their health later in life.

The second trauma in their lives was what the Chinese call the Decade of Chaos, the Cultural Revolution, 1966-76. Like millions of others across China, Xiao Ding’s parents (his father from Hebei and mother from Shaanxi), were torn away from their ancestral homes to be sent to the countryside, to get what was euphemistically called a peasant education. In Chinese parlance, it is shangshan xiaxiang (上山下乡= literally up the mountain and down to the village).

For Xiao Ding’s parents, they joined a couple of thousand others from across China in the virgin wilds of Inner Mongolia, working on a land reclamation project. There, for the next decade, they cleared a vast, desolate scrubland, rock by rock, thistle by thistle, root by root, transforming it into what is today highly productive corn and soybean cropland. They never left.

Out of this crucible of endless public humiliation sessions, beatings, torture, and for some, a premature death from madness, suicide or kangaroo court verdicts that went one kick or strike to the head too far, Ding’s parents found solace and sanity in each other’s companionship. Their ancestral provinces of Hebei and Shaanxi were fading daguerreotypes now. This barren, pioneer land was their home now. At the age of 24, they married on this rolling Mongol plain, in the dead of a very cold winter. According to Chinese astrology, it was the Year of the Rooster – 1969 – definitely not the most auspicious zodiac sign in which to marry. But no matter. Cultural Revolution marriages like the Dings’ happened countless times all over the country, across that long decade of pan-national insanity. In the Dings’ pioneer village, most of the survivors stayed. For their toil, they were eventually accorded modest farm houses and plots of cropland. Given the scant food, cruel conditions and totalitarian madness that surrounded them for ten years, the Dings were finally able to conceive their son, in 1978.

With great pride, Xiao Ding carried Beige Spirit’s ragged scar the rest of his life. He came of age that fateful day. In 2002, Xiao Ding lived his second round through the Chinese zodiac – the same age as when his parents got married in that desolate, Mongolian wasteland, during the height of the Cultural Revolution. Only then did they begin to tell him their stories in hushed whispers, heads down, staring blankly at the floor.

One thought on “Beige Spirit II”