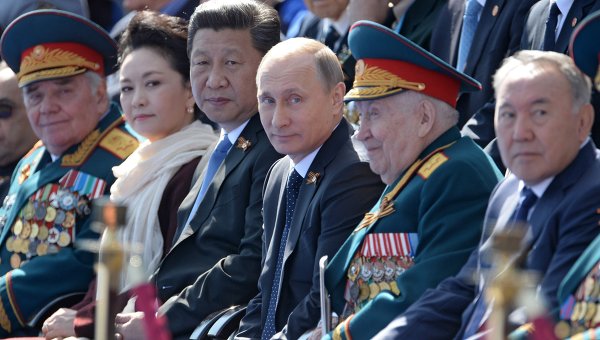 Join Jeff in Beijing for his Radio Sinoland Show. He discusses news and events about China, at home and around the world – information you almost never see and hear behind the Great Western Firewall. China is way too important to not have an insider’s perspective on how its leaders and people are shaping and moving the 21st century.

Today’s show is titled, “Xi & Putin flip the West a stiff middle finger”. Totally censored in the US, May 9th was a hugely symbolic celebration of the Chinese-Russian anti-Western juggernaut, and it was all on display at the 70th anniversary parade of Russia’s victory over the fascist Nazis, that ended World War II. About all Xi and Putin didn’t do last week was to publicly urinate on an effigy of Uncle Sam. It was a giant F.U. to the West from start to finish. This show will give you all the details. It is a fast seven minutes, so buckle up. China’s People’s Liberation Army proudly joined the Russians in the 70th anniversary parade in Moscow, to celebrate the defeat of fascism, to end WWII. (image by www.thesaker.is) In case Washington didn’t notice, China’s navy sailed into the Black Sea to hang out with the Russian fleet. H-E-L-L-O WEST!! (image by www.thesaker.is)