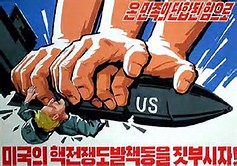 Pictured above: China feels the same way, but has to be a little more subtle about it. A North Korean propaganda poster. We know who the bad guys are.

[dropcap]T[/dropcap]here are a number of ways to look at the ongoing situation between China, North Korea and the upcoming international sanctions being debated by the United Nations Security Council. So far, the proposed restrictions include limits on mineral exports, “except for livelihood purposes”, as well as a list of North Korean ships that cannot dock in Chinese ports.

First, there is not a lot that North Korea does in the international arena, that Baba Beijing does not have its hand in. They are two fraternal communist countries and 65 years ago, the Chinese spilled a lot of blood and treasure to save North Korea from the West. Mao Zedong’s son died on the Korean War battlefield, fighting against Yankee imperialism. There are two million ethnic Koreans living along the border with North Korea and another half a million Northerners living and working in China. Koreans are a recognized minority in China. No other country in the world understands North Korea like China does. This closeness is emblematic of their common border, the Yalu River, which is so shallow, you can wade across it. They also share boundaries with another key ally, Russia.


The key words in the current sanctions text are “except for livelihood purposes”. China is not going to allow Whiteman to starve many millions of Koreans, like was done in Iraq, for over 10 years, starting after America’s first invasion in 1990. Five-hundred-thousand children directly died from America’s and Britain’s genocidal economic and trade sanctions on Iraq, sanctions which, beyond the extermination of those youngsters who died, destroyed a generation of people, with millions of newborns and children mentally and physically stunted for life. This crime against humanity was perpetrated during Bill Clinton’s “enlightened” administration. This Western genocide was infamously endorsed by his psychopathic Secretary of State, Madeline Albright, during her 1996 “60 Minutes” interview with Leslie Stahl, by telling the world,

“We think the price is worth it”.

Exterminating a half a million defenseless children, that is. It’s the American way. Thus, China is going to make sure that North Koreans do not suffer from Whiteman’s pan-global racism,  genocide and empire.

Secondly, China is not going to allow their ally to start a hot war. Most people do not realize that North and South Korea are still at war. An armistice was signed, not a peace treaty, and history’s longest cease fire is still in effect. Both countries are on a war footing and with nearly 30,000 US soldiers camped out just south of the 38th parallel, it is easy to see why North Korea feels threatened. Denuclearization of the Korean peninsula is a top priority for China, because it is assumed that hidden away on Uncle Sam’s nine military bases in South Korea, there are at least a few tactical and/or ballistic hydrogen bomb warheads pointed north.

Baba Beijing’s ultimate goal is to not allow any disruptions to North Korea’s protected status quo. However, all this interference is a huge distraction for the US in South Korea, if, as I think, leaders Kim Jong-un (North Korea) and Xi Jinping (China) are in control of the situation and know what they are doing. It is quite plausible that Xi and Co. are doing this to get the US to spend billions more on THAAD missile shields, keeping more and more ships in the China Seas – sort what the US did to the USSR in 80s-Afghanistan with Al-Qaeda, bleeding it to death.

As far as those THAAD missile shields are concerned, the Chinese People’s Liberation Army (PLA) is supremely confident of its missile technology and, other than Uncle Sam’s six aircraft carriers in the China Seas, the blue water Red Navy dwarfs America’s presence. Beijing has recently told Washington that if it wants to go to war over the South China Sea, then “bring it on”. Even funnier, the US now has to keep these six $13 billion-each sitting ducks at least 1,600 km away from the Chinese coast, yet the jets they carry only have a 950km range. Why? Because China now has its deadly, Mach-15 ship killer, the DF-20D missile, that the US has no answer to defend itself! Yuk-yuk.

One of the ancient Chinese “Thirty-Six Stratagems of War” states, “Make a sound in the East and strike in the West”.  In the current scenario, the cardinal points are north and south, not east and west. Thus, all this North Korean hubbub gives Baba Beijing the distraction it needs to reinforce its unparalleled hammer lock on the South China Sea Nansha (Spratly) and Xisha (Paracel) Islands.

Beijing could also be doing this to help Russia in Syria and the Ukraine, by tying up significant Western signals intelligence and other spy resources in Asia. Ditto the South China Sea.

Next, they can block ships to North Korean ports, but China and Russia have common land borders with North Korea. Russia is also an old ally of North Korea, providing it arms during the Korean War and still today, it works closely with the North. Just like China, Russia wants stability on it’s Siberian border. The movement of trucks and rail will continue, regardless, and nobody is going to be inventorying their contents, including mineral exports.


Next, North Korean leader Kim Jong-un could be having some authority issues in Pyongyang (North Korea’s capital) and Baba Beijing is helping him keep his internal adversaries off balance.

And in a very Machiavellian fashion, Baba Beijing can use their endorsement of these “harsh” sanctions on North Korea, to say to the West, “see how we are working with you. Now we need you to return the favor on…”. China can also use this as a way to show its neighbors how intrusive Uncle Sam is, and what a destabilizing force it is in Asia.

In sum, just remember that China is North Korea’s very, very big brother and protector. Frankly, I think the West is getting played like a big Buddhist temple drum and it is the drum that gets the crap pounded out of it.