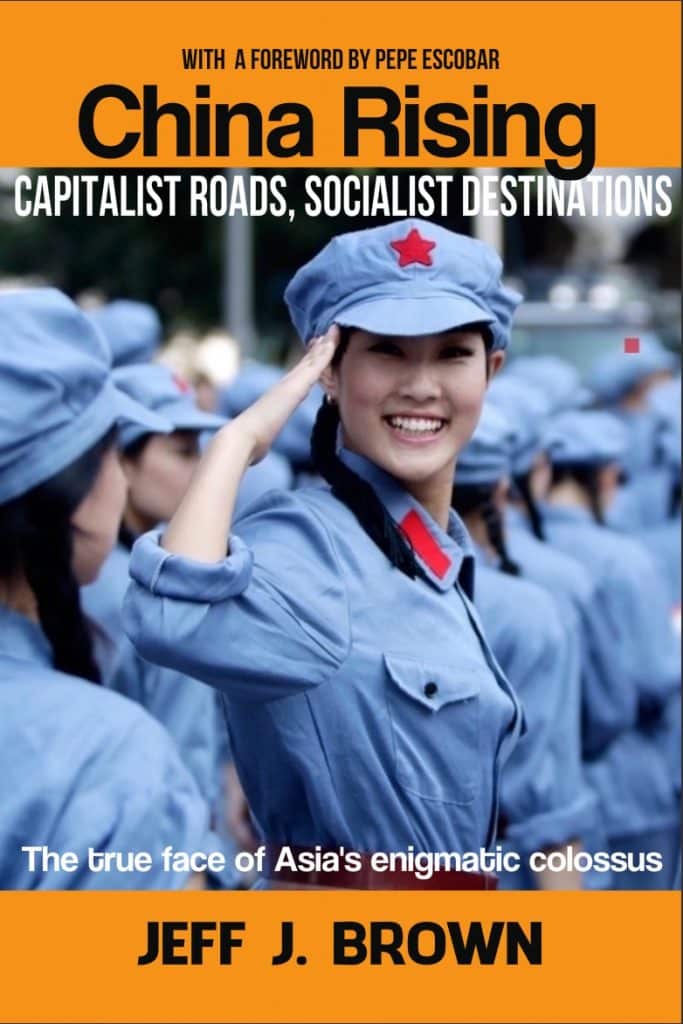 Pictured above: my second book on China is out, after “44 Days”.


CHINA RISING, the latest book by the author of 44 Days Backpacking in China: The Middle Kingdom in the 21st Century, with the United States, Europe and the Fate of the World in Its Looking Glass, one of the most engaging political travelogues in recent memory, is a comprehensive, absorbing, eye-opening guide to China in the 21st century, a volume, which in 700 pages packs it all: history, personal memory, sociology, political analysis. and above all, a fair dose of invaluable first-hand information designed to detoxify the Western reader’s mind from the constant lies served by the Western media in support of Washington’s global imperial agenda.

The result is a thorough rectification, a “deprogramming” of just about everything we, as Westerners, have been “taught” to believe about China, allowing us to see the Chinese people and their leaders as they really are—ordinary human beings just like us with dreams, foibles, defects and a proud history extending millennia, a people that in a century have overcome just about every scourge known to man: famines, massive drug addiction, civil wars, invasions, grinding poverty and colonial humiliation, to become one of the great powers of this century, perhaps the greatest, and which today, much as a result of its success, is facing the undying hostility of the world’s hegemon, the United States, itching for a confrontation to reassert imperial control.

It is thus indispensable for Westerners and Asians to know the truth of the situation, what their governments are doing (led by the USA) behind their backs, if the planet is to be spared a nuclear conflict of incalculable horror. For, as Brown indicates, China will not back down this time, and neither will Russia, her strategic ally, who faces the same type of constant harassment and bullying by the West, also for having the audacity to defend her sovereignty and set her own foreign policy course. The truth therefore must come out about key events, from the so-called “Tiananmen Massacre”, organized by the CIA, to who Mao Zedong really was and did, a role for which he earned the love of his countrymen to this day. It’s a big job, but the author, an American fluent in Chinese, a teacher by profession, and with 13 years’ residence in the Middle Kingdom, and a cosmopolitan background, is eminently qualified to meet the task.

Andre Vltchek, himself a truth-teller of distinction, and a man who, like Jeff J. Brown knows China well, has endorsed CHINA RISING as a unique instrument of mind liberation. Vltchek’s words are worth heeding:

The Western public should learn and remember one essential thing about China: no matter what European and North American propaganda barks about the People’s Republic, China is much more “democratic” than the West. It is democratic in its own way. For thousands of years, it developed its own political system. Its rulers, no matter who they are, are given a conditional right to govern by the people. In the past, but even now it is called the “Heavenly Mandate”. If the rulers fail to respect the will of the people, they get deposed. And the Communist Party of China is greatly respectful of the desires of the majority of the Chinese people. When they want liberal reforms, they are delivered. When they want more Communism and an epic fight against corruption, like now, China’s government immediately reacts. It is powerful and democratic, although it is a very specific and complex arrangement. And now, the Chinese people are outraged and they are sending clear signals to Beijing: “Do not succumb to the West. If you do, our nation will suffer immensely, and the rest of the world will turn to ashes”.

The fate of the world hangs in the balance and only truth can prevent a global catastrophe. Arm yourself with the facts by reading CHINA RISING, and do your part.