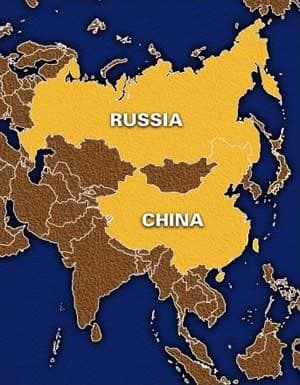 Pictured above: starting today, this map takes on a whole new geopolitical meaning. (Image by baidu.com)

Cross-linked with The Saker: http://thesaker.is/something-symbolic-but-very-important-is-happening-in-the-china-russia-partnership/

Up till now, both Russia and China have eschewed the concept of an “alliance”. Why? Because of all the historical Western empire baggage that goes with it, including sometimes secret, frequently broken treaties, treachery, double dealing, back stabbing and all the other perfidy that goes with it. Not to mention, potentially unenforceable or unwise commitments to militarily attack an enemy of an ally, regardless of how stupid or absurd it is. Just recall the insanity of World War I, to put things in perspective.

The Chinese and Russians have preferred to talk about their “special relationship”, “friendship”, “historical ties” and “strategic partnership”. Until today, that is. People’s Daily, the flagship newspaper of the government of China splashed this headline:

“Semi”, but nonetheless, an alliance. Out of curiosity, I searched “China-Russia alliance” in Chinese on the People’s Daily website and was surprised to see that it has been used sparingly, starting in November, 2015. “Semi” was not used, but “new” was, as in “new Sino-Russian alliance”. This in spite of the fact that Presidents Vladimir Putin and Xi Jinping, as well as their Foreign Ministries, have both publicly stated that their countries’ relationship is not an alliance, but something else.

But clearly, the semantic Rubicon has been crossed. Geopolitically and diplomatically, this is huge, “semi” or not.

I always say to my students that “words are powerful things”. This week’s headlines confirm that in spades. Please officially welcome the Sino-Russian alliance onto the world stage. WOW!