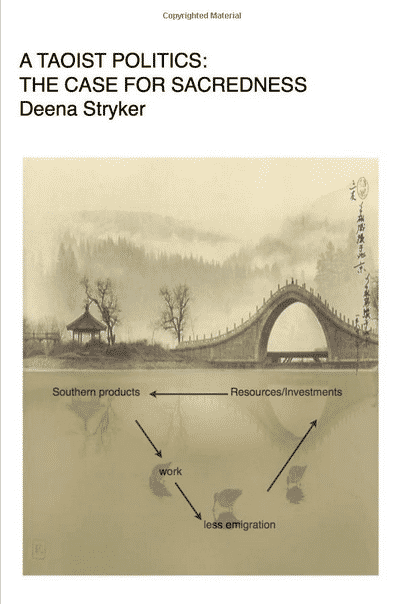 Ms. Stryker’s book on philosophy, A Taoist Politics: The Case for Sacredness, is an ambitious work. Much like a Sartre or a Kierkegaard, she not only states the problem, but pushes us to change, in order to save us from our dilemma.

Using the destruction of the World Trade Centers on September 11th, 2001, as a launching point, Ms. Stryker lays out the dialectical polemic in simple terms. The world is starkly divided North and South, West and East, rich and poor, and largely Christian and Muslim.

There is a clash of civilizations, between Christianity, Judaism and Islam, because their philosophies are linear, not circular. Monotheism’s gods have been externalized and are vengeful. In order to find a more harmonious and balanced outlook on life, one has to travel further east, to the bosom of Buddhism and the Tao (or Dao, depending on your transliteration of the Chinese). Both of these religious systems are atheistic in their pure forms and both connect the follower’s inner self to the Earth and universe.

Thus, according to Ms. Stryker, these oriental philosophies avoid many of the pitfalls of the three great monotheistic religions, because Easterners take a very holistic, cyclical look at life in the universe. Ms. Stryker relates this great divide as being between “Having” and “Being”, consuming versus living, West versus East. Without them knowing it, the Club of Rome in the 1960s could see what was ailing humanity, calling it the “Problématique”, which was defined by the well-known 1972 book, “The Limits of Growth”: can the North and West continue to super-consume at the expense of the poor South and East? Thanks to racist inclinations, these poor, dark-skinned Easterners and Southerners are looked down upon by Westerners. From the viewpoint of the West and North, she calls these peoples on the opposite sides of the Earth, the “Other”. Westerners relegating them to sub-human status simply nullifies any credibility of their Eastern philosophies, which they can offer to their rich and sated counterparts in the West and North.

Westerners are all about individualism and personal freedom and Ms. Stryker cites philosophers Herbert Marcuse as the torchbearer of “me-ism”. Just let me be, let me do what I know is best and everything will be alright. At the same time, Alan Watts was his arch-nemesis, as he was a proponent of Taoism, and for good reasons. Easterners are more concerned about where one fits in the firmament, how our surroundings impact us, how we impact our environment and most importantly, how we get along with our neighbors in society and daily life. This kind of co-existence can be found in Buddhism, Taoism and the Hadith of Islam, all giving us sound advice on how to coexist with each other and with Planet Earth, day in and day out.

Westerners are ignoring these other spiritual pathways and it is not only spelling their own moral and physical destruction, but likely the end of human civilization as we know it. The West’s incessant insistence on the individual and not the group has divorced its people from meaningful traditions and rituals. Ms. Stryker points out that in Muslim North Africa, suicide rates go down during the arduous, but very social and cohesive fasting month of Ramadan, whereas in the West, depression and taking one’s own life go up over Christmas and celebrations like Mother’s Day. Why? Because in the West, these all-important signposts throughout the year have been debauched into a vapid, soulless consumerism: buy-buy-buy, while all their wonderful pageantry, ceremony and rituals have been reduced to meaninglessness or have been completely forgotten.

The loss of our rituals and their binding powers of solidarity in family, neighborhood and society has even more ominous repercussions. The West’s linear thinking causes us to solve our differences, not through commonalities, but tit-for-tat and an eye for an eye against everyone else, the Other. As a result, Westerners are prone to violence in their dealings with each other and grossly genocidal in their relations with the Other. By any stretch of definition, the West has caused more wars, more human loss, more exterminations and more environmental destruction around the world, than any other civilization. Thus, the survival of the human race may hang in the balance, because the rich North continues to ignore the healing spirituality of Southern belief systems.

Ms. Stryker did extensive reading and research to write A Taoist Politics. She cites well-known sources, such as Jared Diamond, Sigmund Freud, Francis Fukuyama, Stephen Hawking, Werner Heisenberg, Aldous Huxley, Jeremy Rifkin and of course, Lao Tzu, the author of The Tao. But, she also dug even deeper and cites in much more detail, less well-known writers, including the aforementioned Herbert Marcuse and Alan Watts, along with Boris Cyrulnik, Fritjof Capra, Stuart Kauffman and Gary Zukav.

Like all good philosophers, Ms. Stryker culminates her book with admonitions and suggestions on how Westerners can avoid their own eventual destruction and, if the trends continue, an abysmal fate for all of humanity. In any philosophical work, we cruise through to the summation, saying to ourselves, “I know that, I didn’t know that, I’m not sure, I agree, I disagree and I need to learn more about that”, while waiting for the other shoe to drop: time to take our bitter medicine and change.

Ms. Stryker states what we all intuitively know to be the truth: Westerners can no longer continue to be the gluttonous, super-consuming Hampshire hogs of humanity, at the expense of the 30,000 dark-skinned children who die every day, for a lack of food, potable water, medical care and adequate housing, along with the six billion souls who suffer the indignities of living on less than ten dollars per day. In other words, Americans and Europeans, along with most citizens of the Organization for Economic Cooperation and Development (OECD), not to mention China’s exploding consumer class, must live with less Fluff and Stuff.

But, luxurious consumption at the expense of the downtrodden masses has been humanity’s status quo, since the dawn of sedentary civilization. With the advent of modern capitalism, thanks to the Industrial Revolution and its global, colonial imperialism, it has changed, but only egregiously in the wrong direction. The cavernous gap between the world’s most exploited and their racist Western masters, is growing incessantly. Only one government and its leaders are banging the drums about eliminating poverty and not just talking about it, but spending billions on making it happen: the Communist Party of China (CPC), President Xi Jinping and Premier Li Keqiang are walking the walk and putting cold, hard renminbi on poverty’s barrel head. How many decades has it been since a Western or OECD leader has seriously pushed for helping the poor, which can only mean redistributing wealth from the top to the bottom, North to South? That’s not how the West’s owners want it. They keep rigging the system so that the cash keeps flowing up to them, South to North. But the CPC is kicking butt, taking names and putting money where their mouths are, to completely eliminate poverty in China by 2020.

The elites of ancient Rome, Egypt, Babylon, India and China, as well as the Princes of Power in the West never willingly redistributed their ill-gotten theft. The have-nots only got it by revolution, or as the Chinese would say, a change in the Heavenly Mandate. And going by the annals of history, if we don’t destroy ourselves first, Ms. Stryker’s dream of a more balanced, more circular and less linear world will only happen if there is a revolution – this time on a global scale. Until then, 30,000 children will continue to perish every day on the consumer altars of the West, and more and more billions will be crushed by the poverty of living on less than $10 from sunrise to sunrise.

Here’s to hoping that Deena Stryker’s follow up volume to her excellent and thought provoking philosophical treatise, A Taoist Politics: The Case for Sacredness, has the word “revolution” in its title. My clinched fist is already raised up high.

Note: the print version of Ms. Stryker’s book can be purchased on Amazon: https://www.amazon.com/Taoist-Politics-Case-Sacredness/dp/1419676059

The buck stops with YOU. If you don't share this, who will?
Categories: 44 Days Backpacking in China book, Book Review, Jeff J. Brown
| Tags: A Taoist Politics, Deena Stryker