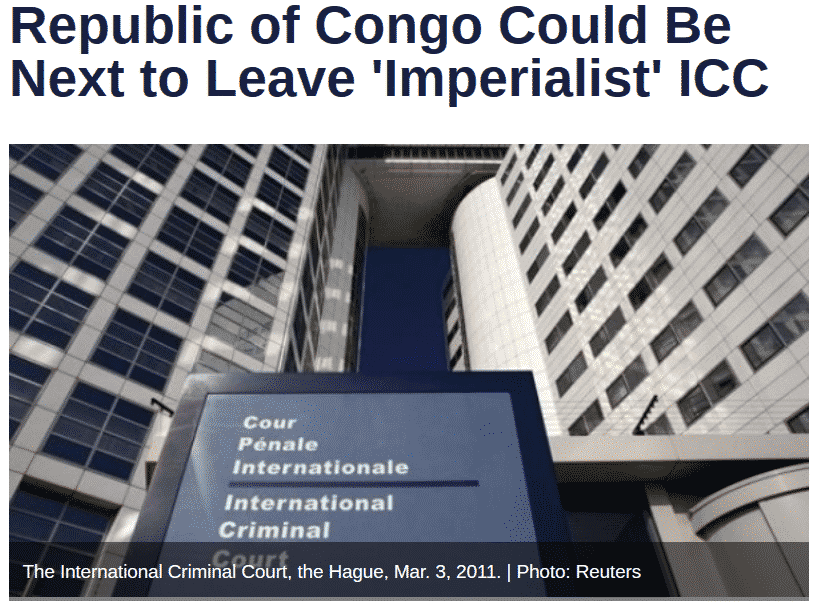 Pictured above: the tiny, Western-colonized African country of Gambia roared like a proud Anti-West lion this week, calling the ICC the “International Caucasian Court”, which is exactly what it is: a blatantly racist sledgehammer to demonize and dehumanize the dark skinned peoples of the world, who Eurangloland fearfully perceives as the Dreaded Other. (Image by Reuters, via Telesur)

Editor’s note: reading this column’s preceding October 29 article first, will make this piece much more relevant, as it is a follow-on reflection of its contents,

Putin and Xi in Western propaganda – why does XJP get off so lightly? Moscow-Beijing Express on The Saker 20161029

In the above article from last week, I speculated that the Philippines’ President Rodrigo “Roddy” Duterte is changing the geopolitical landscape among the world’s exploited countries, by emboldening other leaders to have the courage to call the West for what it is: racist to the core, genocidal, colonial and rapacious in its policies and practices of plundering and pillaging these peoples’ natural and human resources.

Duterte is very smart. He is also sly like a fox, with his seemingly rambling, unscripted and very colorfully worded public pronouncements. After all, controversy and outlandishness sell. Calling Obama a “son of a whore” is powerful, because he is bringing Western elitism, arrogance and hypocrisy down to a populist, working class, street level. It is the high art of satire in four words and brilliant in its impact, since satire’s purpose is to publicly insult the rich and powerful. His formula for getting humanity to laugh at and denigrate Western empire is tried and true: calling a racist spade a racist spade, day after day and at every public opportunity, thus keeping his message “above the fold”, on Page One, in the world’s fast changing 24-hour news cycle.

After his withering attacks on the USA’s worldwide Wehrmacht, during his just concluded, highly successful state visits to China and Japan, this week on Filipino national TV, he said the following (about self-righteous, genocidal America cancelling a military sale):

Look at these monkeys, the 26,000 firearms we wanted to buy, they don’t want to sell. Son of a bitch, we have many home-made guns here. These American fools… Russia, they are inviting us. China also. China is open, anything you want, they sent me brochure saying we select there, we’ll give you… But, look closely and balance the situation, they [the Americans] are rude to us.

Uncle Sam is not only rude, but also clinically racist. Calling the Americans “monkeys” was no accident. Like “son of a whore”, it is ongoing public satire for the masses. Roddy also knows his Filipino history very well. “Monkeys” was equally a reciprocal slap in face for how Americans perceive Filipinos, as these two racist, turn-of-the-20th century political cartoons so dramatically portray: So, Duterte keeps on keeping on, as he proudly, defiantly and satirically scorns the Western emperor for being butt naked. Other downtrodden countries are taking his cue. During his just concluded state visit to Beijing, Malaysia’s Prime Minister Najib Razak wrote an emotionally powerful article in the China Daily, extolling his and China’s longstanding cooperation and peaceful coexistence. One paragraph, in particular, should be framed and hung on the walls of leadership, in every country outside Eurangloland, as it ranks right up there with the Gettysburg Address,

…we believe it is incumbent upon larger countries to treat smaller ones fairly. And this includes former colonial powers. It is not for them to lecture countries they once exploited on how to conduct their own internal affairs today. Malaysia and China are united in agreeing on the need to defend the sovereignty of the nation state and in the belief that the individual histories, values and governance systems of different countries must be respected.

This is of course something Eurangloland (including Israel) defecates on 24/7 around the world, with imperial impunity, pulling off more and more brazen false flags, “humanitarian” R2P (Right to Plunder) wars, massacring millions every year and laying waste to entire countries and peoples, either directly (ex., Palestine, Iraq, Syria and Afghanistan), or by proxy (ex., Ukraine and Venezuela), among a book length list of other victims, going back five centuries.

Would Prime Minister Razak have been so blunt to speak like this, a year ago, before Duterte pierced the colonial veil? We will never know, but Roddy probably gave him a shot of courage, in any case.

Roddy’s anti-colonial karma is spreading across Planet Earth and among its exploited masses. On October 8th, 2016, the African country of Burundi officially withdrew its membership from the International Criminal Court (ICC), which was set up by the West to persecute and demonize its political enemies. http://news.xinhuanet.com/english/2016-10/08/c_135739060.htm It is no coincidence that nine out of ten of the ICC’s major investigations have been conducted against dark skinned, powerless Africans. Who was the tenth? Serbia’s Slobodan Milosevic, whose country was turned into a radioactive death, cancer and birth defect hell hole, by US President Bill Clinton’s 38,000 NATO flight sorties, using depleted uranium bombs. http://www.globalresearch.ca/depleted-uranium-haunts-kosovo-and-iraq/3715

Following Duterte’s Anti-West leadership, the flood gates are starting to open and other leaders are being empowered. Continental heavyweight South Africa, a member of BRICS, quickly followed Burundi’s raspberry to Western empire’s arrogant face. Then this week, Gambia became the third country to pull out of the ICC, with its Information Minister, Sheriff Bojang satirically declaring that the ICC is an,

International Caucasian Court for the persecution and humiliation of people of color, especially Africans.

Jeez Louise! Talk about a kick to Western empire’s racist, testosterone fueled cohones (Spanish for testicles). Again, would Mr. Bojang have been so scathing and would Burundi and South Africa have left the ICC, without Roddy’s example? We can only speculate, but it is safe to say that the Filipino president was a reassurance. It looks like the Republic of Congo is next in line to leave the International Caucasian Court. http://www.telesurtv.net/english/news/Republic-of-Congo-Could-Be-Next-to-Leave-Imperialist-ICC-20161104-0010.html

The ICC’s total obedience to Western empire was transparently displayed by the fact that it will not investigate Uncle Sam’s brazen 2009 overthrow of Honduras’ elected socialist President Manuel Zelaya (see the 30-second video in the above hyperlinked article). The ICC will never go after the Clintons, Blair, Cameron, the Bushes, Cheney, Obama, Sarkozy, Hollande, Reagan, Kissinger, Nixon, LBJ, every Israeli Prime Minister, even Carter for Afghanistan, and on and on, because their false flags, wars, genocide and extermination of tens of millions of dark skinned people is A-O-K, just fine and dandy, thank you.

Simultaneously, Eurangloland can only pull off so many false flags, assassinate so many Anti-West leaders, overthrow their governments and financially destroy them with blockades and sanctions. The hope is that Duterte’s example will turn into a global avalanche, overwhelming empire’s ability to keep humanity’s exploited “Dreaded Other” in subjugation and humiliation. Think of it as colonial whack-a-mole. Here’s to being optimistic that there are tens, hundreds and then thousands and millions of cheeky, raspberry blowing moles across our Pale Blue Dot, satirically shouting,

THE WESTERN EMPEROR WEARS NO CLOTHES! Author Jeff J. Brown wears a Duterte bracelet to show his support for one of the world’s most influential and effective leaders on the current geopolitical stage. (Image by Jeff J. Brown)

4 thoughts on “The dark skinned, exploited peoples of the world are calling the West for what it is: racist. China Rising Radio Sinoland 20161105”