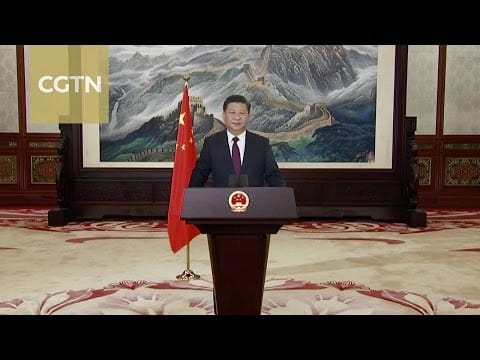 This year’s 2017 New Year’s speech by Chinese President Xi Jinping speech was rich in symbology, by intentionally portraying a much different mien than in previous years of his leadership. While most Westerners wouldn’t notice the change, it was definitely not lost on the citizens of the People’s Republic. The modern art of reading the tea leaves quickly moved into the conversation on China’s streets and social media. His presentation shouted out to them and the rest of the world what Xi and the Communist Party of China (CPC) are expecting in this New Year of the Fire Rooster.

In earlier years, Xi was in a warm looking, wood paneled office, seated comfortably behind a huge bureau. On it were notebooks to show studiousness, as well as several red and white phones, to suggest ongoing and urgent lines of communication with all concerned. A pen holder and an open-faced calendar exuded the daily rigors of being leader of the world’s most populous country, while burnishing his already well-deserved reputation of outworking even the most dedicated Party member.

Almost all the camera shots were up close and personal, his upper torso above the big desk filling up most of the screen. He mostly kept his hands clasped together, like an avuncular Confucian scholar, leaning into the camera to make important points, and often making hand gestures, in a relaxed, personal style. Surrounding him were walls of books, many obviously being series of old Chinese classics, projecting sagacity and learning, two highly prized traits of all top historical leaders. Group family photos with Mom, Dad, brother and sisters were prominently shown, as well as an old black and white photo of his father sporting a Red Star of Communism on his People’s Liberation Army field cap, all facing the cameras. The implied message: family man, respect for elders and the legacy of his family in the CPC. In the middle of these bookshelves and right behind him was a smallish ancient painting of the Great Wall, offering subdued strength and protection for the people. Also behind him to his right was a standing national flag of China, with the famous five-star arrangement proudly turned toward the viewers (CPC at the helm of farmers, workers, small- and large businesspeople).

For the last three years, a very similar speech, in the exact same paneled room, with identical accoutrements, was given, all signaling to Xi’s 1.4 billion citizens continuity, stability and harmony, the perfect definition of the much coveted, historical Heavenly Mandate. All was good and predictable. My oh my, what a difference does a crazy global geopolitical year and a new US president make, and Xi’s speech this week showed that in spades. Gone were the warmness, intimacy and friendly, familial ambiance. This year, Xi strode somberly into a large, open, high ceilinged, sumptuous room, with plush carpeting. He stood behind a modern podium, that came to a narrow, triangular point at the base. Two microphones were featured on the podium top, while on its front was the national seal of China staring into the cameras. No more Uncle Xi. This year it was President and Chairman of the CPC and Central Military Commission (CMC) writ large. He looked like has was riding a mighty steed, or steering the country’s ship, looking out for treacherous waters, from the captain’s deck.

The carpet had lotus flower floral designs, which symbolize rectitude, purity and honesty in Chinese lore. It was not lost on careful observers that Xi’s podium was placed in the center of one of these floral patterns, like a presidential lotus bloom rising above the troubled and murky seas of world geopolitics. Gone were Mom and Dad and all the hundreds of books that used to ensconce Xi. This year, all that was behind him was a massive, four-meter wide by three-meter tall classic painting of the Great Wall and the national flag. This immediately represented danger outside the boundaries of the Motherland, foreign invaders massing on the outside. After walking straight to the podium, he put his two hands on its sides and never moved them during the nine-minute speech, as if he were helping maintain control of the circumstances, holding down the fort. Much more rigid and serious than the previous three years, he looked like a dead serious general preparing his officers for a great and challenging battle.

Even last year, after China’s mighty military muscle flexing at Beijing’s huge, 70th anniversary World War II Victory Parade (with Vladimir Putin at his side), there was no need to acknowledge the West’s never ending efforts to destabilize and overthrow China’s communist government, nor the United States’ obviously aggressive maritime pivot off its shores. But this year, with President-Elect Donald Trump making Sinophobic appointments in his cabinet and suggesting that Taiwan is a bargaining chip for future discussions and negotiations, Xi unequivocally reassured his people and let Uncle Sam know the obvious,

We will resolutely safeguard our territory and sovereignty, as well as our maritime rights. No matter who seeks to make an issue of this, the Chinese people will never give way.

What this year’s change in speech ambiance, tone and message means is that Xi Jinping and the CPC are battening down the hatches and are preparing to fight the US and its NATO and regional allies. Diplomacy and dialogue are de rigueur, but in the meantime, psychologically preparing the citizens is critical. The Western Huns are encircling their great nation and it’s time to assume the worst.

Sir, are you prepared to go to war over Taiwan? Because China is.