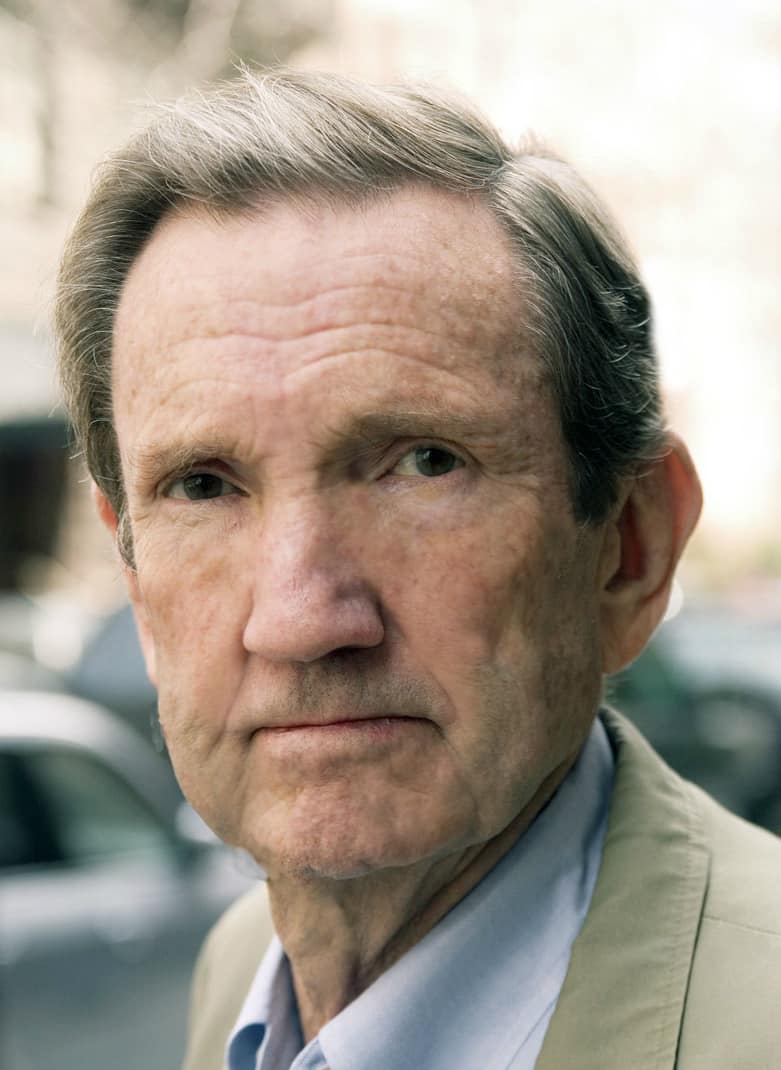 Pictured above: a recent photo of the wise, serene and wizened Ramsey Clark. (Image by Veterans Today)

Growing up in Oklahoma, we had a macabre idiom. Anytime someone got some money, like pay day, or unexpectedly, like being repaid a debt, we would say, “Well, I guess I can cut my throat and die rich”! For Jeff J. Brown, author and analyst on China Rising Radio Sinoland, interviewing Mr. Ramsey Clark is like journalistically becoming a millionaire, but spare the knife please. As Ramsey will tell you, there’s too much work to do, too many battles to fight for social justice for all the world’s people, not for Westerners who are living off the immoral lucre of imperial exploitation.

Former uber-insider in Washington in the 1960s’ Lyndon Baines Johnson (LBJ) administration, he could have spent the rest of his life rich, fat and superficially happy, writing fake news CIA editorials in the New York Times, on Meet the Press and CNN, fawning over America’s Worldwide Wehrmacht. But he didn’t. No, something clicked inside and he took the hard path of attacking Western empire and fighting the Princes of Power in the media and courthouses, relentlessly and fearlessly. For 45 years hence, Ramsey has been inflicting serious pain on the West’s elite owners – the oil bankers, the military-industrial- and CIA-MI6 complexes – so much so, that he has to live 24-7 with security personnel guarding him and his life. Our Western governments use murder, extortion, blackmail, bribery and false flags as everyday tools of policy and law, along with genocide, extermination, war and exploitation, like plants and animals breathe air.

Jeff will not take time to repeat Wikipedia facts here, although he does review with Ramsey a synopsis of his illustrious life. During the interview, Ramsey talks about his three and half months in Civil War China, in the summer of 1948, and his positive impressions of the Chinese people. They talk about the murders of JFK, RFK, MLK and his friendship with Mr. William Pepper, and that he has read all of Pepper’s books, which clearly name names of those in the US government who helped kill these three leaders, making these acts known false flags. Jeff reviews with Ramsey the revenge of the West’s governments on the people of Malaysia, for convicting Netanyahu, Bush, Blair et al., of genocide and crimes against humanity, by downing three national flagship airliners, in the improbable span of nine months in 2014: more evil.

Jeff also asks Ramsey if he supports communism, through his relationship with the Worker’s World Party, a question Jeff had not heard Ramsey get asked in other venues. Listen to his answer and see for yourself if Ramsey is a communist.

The photo above shows the wizened face of a man who has stared down the face of global evil and fought it tooth and nail, writing books, legally representing victims of Western empire, establishing organizations and confronting world leaders in newspapers, conferences and symposiums. Who you see is a revolutionary standard bearer of global social justice and peace, while exposing the West’s long history and its daily, ongoing racism, false flags, genocide, exploitation, war, colonialism and imperial tyranny on every inhabited continent on Earth.

At the wise old age of 89, Ramsey hopes that everyone who listens to this interview will find inspiration in his long journey, to take his lofty banner of resistance and courage into the 21st century, to fight the good fight for global social justice, equality and peace, while exposing our many leaders, who support and nurture the evils of global empire.

May there be a million, no, make that billion Ramsey Clarks in the world.

PS: Jeff owes an incalculable debt of thanks to Mr. Jay Janson, who organized this interview with Ramsey Clark in New York City. Listen to Jay’s own incredible life story here: http://chinarising.puntopress.com/2016/12/24/music-and-revolution-the-amazing-life-story-of-jay-janson-on-china-rising-radio-sinoland-161224/

Where to become an agent for truth and justice: