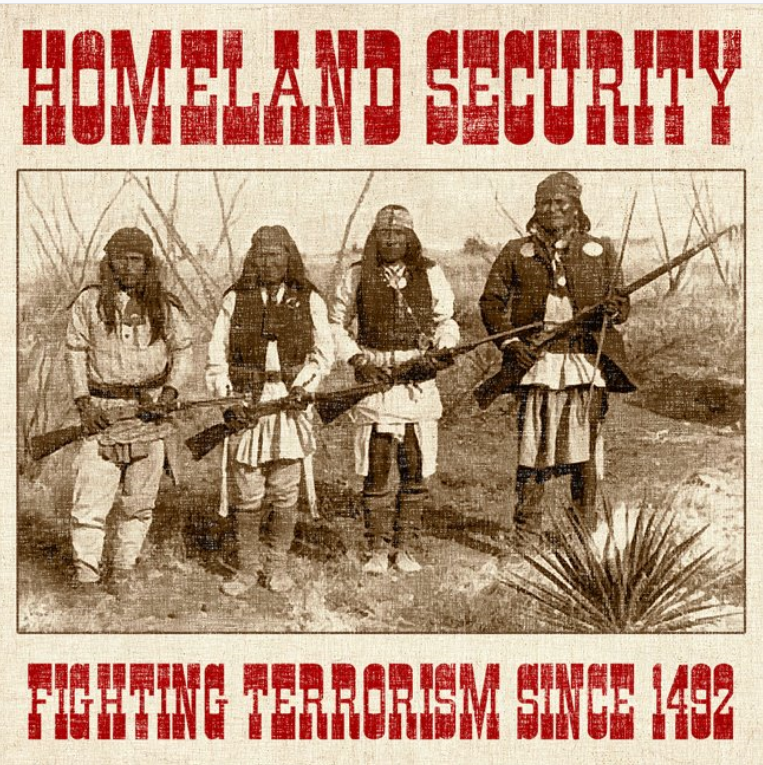 Pictured above: selfishness is anathema to the world’s Indigenous Nations, as well as for China and all other communal, communist-socialist peoples. Native Americans saw their numbers reduced from 100 million to 10 million citizens, as a result of the West’s genocidal rape and plunder of North, Central and South America. Imperial capitalism’s racist campaign of extermination is continuing to roar with fury on every inhabited continent and island. Chinese and indigenous models of governance offer us survival as a species. If we keep capitalism, then the 99% is doomed to extinction and the 1% will inherit the Earth.

I just read Roxanne Dunbar-Ortiz’s majestic An Indigenous Peoples’ History of the United States (http://reddirtsite.com/). I encourage you to do the same, regardless of your nationality or origins, as it honestly recounts human history and current events across the globe. While I was reading in shocking detail about the relentless, genocidal destruction of the Americas’ First Nations, one theme that kept popping up was the juxtaposition of the Natives’ socialist, sharing, commonwealth civilizations versus the Western, capitalist worship of selfishness, competition, individualism and insatiable drive for never ending acquisition and consumption.

Here is a typical refrain from her book (I added the bold font):

The defect of the [reservation] system was apparent. It is [socialist] Henry George’s system and under that there is no enterprise to make your home any better than that of your neighbors. There is no selfishness, which is at the bottom of civilization. Till this people will consent to give up their lands and divide among their citizens so that each can own the land he cultivates, they will not make much more progress.

This was Senator Henry Dawes, pushing the General Allotment Act of 1887, a White man’s “law” which was passed to plunder what little lands were not yet stolen from the Indigenous Nations.

Most of the world’s cultures outside the Christian/Jewish West were socialist and communal, since the dawn of organized civilization. It was because they were so successful, so prosperous, healthy and harmonious, that Western capitalism had to annihilate them, to expunge the manifest truth of a shared vision for Planet Earth and human relations, only to then enslave the surviving locals and extract their natural resources.

Jesus Christ was the antithesis of selfishness, which is why he was murdered by rich elites. The same goes for Mohammed and his followers of newborn Islam, who were persecuted and killed for preaching “socialist” values. India’s Mahatma Gandhi was assassinated for being an unselfish, wealth redistributing socialist. Capitalists barely stomached Martin Luther King, Jr. when he marched against racism. However, as soon as he started demanding an end to the multi-billion-dollar Wehrmacht gravy train in Southeast Asia, and demanding socialism at home for the 99%, he signed his own death warrant at the hands of the US government and the deep state that runs it. Over the millennia, everywhere the West has dominated, millions of nameless voices fighting for social justice and economic equality have been ruthlessly snuffed out by the elites: bankers, generals, politicians and each era’s version of rapacious landowners, merchants and capitalists.

For Jesus, it was the temple money lenders and their usury, which was keeping the poor on their hungry knees; for Mohammed, is was greedy merchants, who were making fortunes off worshippers going to Mecca’s Kaba’a, to buy icons and idols; Gandhi railed against the West’s racist, extractive colonialism and as mentioned, King denounced the US’s imperial, genocidal onslaught, starting in 1607 with the founding of its slave economy and the extermination of 18 million Indigenous citizens in-country, with 100 million wiped out in all of North, Central, South America, and still ongoing.

Just follow TeleSUR for a month (https://www.telesurenglish.net/) to see the litany of headlines about labor leaders and social activists – many of them Natives – being kidnapped, disappeared and murdered in cold blood, across Central and South America. The United States sends secret armies (special operations) all over the world, especially Africa, to assassinate anti-imperial locals and their groups, who fight for their countries’ 99%. This, while trying to destroy every country that is anti-imperialist: China, Russia, Iran, Syria, Venezuela, North Korea, Cuba, Eritrea and Indigenous nations around the world, to name just a few. Today’s anti-West leaders are very aware of the problem. At the just concluded ALBA Summit, Nicaraguan President Daniel Ortega spoke truth to power (I added the bold),

In addition, he stressed that capitalism does not believe in solidarity since by nature [it] is a system based on selfishness. “Because of that attitude, it does what it will [do] to hoard, to dominate and expand, they even kill each other, we cannot expect anything else,” he said before adding that “slavery is imposed by the tyranny of global capitalism. There are other forms of slavery, which is why humanity is struggling in so many conflicts, because wealth is concentrated among a few and poverty multiplies (https://www.telesurenglish.net/news/ALBA-Summit-Evo-Morales-Denounces-The-New-US-Coup-Strategies-20181214-0015.html).

Below is an excerpt from a book by the neoliberal Institute of Economic Affairs, where they spent 233 pages trying to deny the obvious quoted capitalist realities (https://iea.org.uk/wp-content/uploads/2016/07/Selfishness,%20Greed%20and%20Capitalism.pdf). In the quoted tome, mainstream apologist Ha-Joon Chang says all we need to do is regulate capitalism, which has never worked more than a generation, since the government always gets suborned by ever-increasing concentrations of private wealth and power,

In his best-selling book 23 Things They Don’t Tell You About Capitalism, Ha-Joon Chang says that free-market economists regard people as ‘tunnel-visioned self-seeking robots’, ‘totally selfish’ and ‘selfish, amoral agents’ (Chang 2010: 46, 47, 50). ‘Free-market ideology,’ he claims, ‘is built on the belief that people won’t do anything “good” unless they are paid for it or punished for not doing it’ (255).

Of course, “free-market” is one of many capitalist euphemisms to rape, enslave and plunder, since elites always coopt the political system, to pay for and write laws to make it all nice and “legal”. Recall the aforementioned General Allotment Act of 1887, plus countless more, extorted from conquered and massacred peoples across Earth. Need I mention the many egregious, unequal Western and Japanese treaties forced on the Chinese, during their post-Opium War, Western drug cartel century of humiliation, 1839-1949, something I’ve written much about (https://chinarising.puntopress.com/2018/06/18/praise-for-the-china-trilogy-the-votes-are-in-it-r-o-c-k-s-what-are-you-waiting-for/)?

Western treaties and international laws have always been self-justifying fig leaves, since the Christian/Jewish Churches and governments invoke their colonial Doctrine of Discovery (wherever you invade, just plant a flag and it’s yours to rape and plunder) and racist Terra Nullis (the Natives are sub-humans, thus those lands are unoccupied, so you can exterminate and enslave those godless vermin – http://chinarising.puntopress.com/2018/01/06/slavs-and-the-yellow-peril-are-niggers-brutes-and-beasts-in-the-eyes-of-western-empire-china-rising-radio-sinoland/). These Aryan, Judeo-Christian supremist policies are still in full force, but today are artfully ensconced in a tsunami of government-corporate orchestrated mainstream propaganda, Orwellian textbooks and media (http://chinarising.puntopress.com/2018/04/06/james-bradley-tells-it-like-it-is-on-china-rising-radio-sinoland-180406/).

The antidote is to read alternative news sources, like this one, read books like Ms. Dunbar-Ortiz’s, acknowledge the West’s thousands of military bases, navies, national and proxy armies around the world and the chaos they are creating on every continent (okay, maybe not Antarctica). Then, the hard part for most people is to admit that the source of all this human misery and spiraling destruction of Earth’s ecosystems are directly due to selfish Western capitalism.

While selfishness is constantly denied in the capitalist West, the evidence is manifestly omnipresent. Ayn Rand, the rock star goddess of neoliberal capitalist individualism and exploitation even wrote a mega-selling book entitled, The Virtue of Selfishness (https://en.wikipedia.org/wiki/The_Virtue_of_Selfishness). She anointed selfishness as “enlightened”. Tell that to the one billion-plus, mostly dark-skinned, non-Christian people who have been exterminated since the 15th century, across our Pale Blue Dot, and who are continuing to be sacrificed by the millions every year on the altar of Western imperialist capitalism.

This all flies in the face of global, communal Native cultures and in communist-socialist Chinese civilization as well. To call someone selfish, (自私自利 = zisizili) is to say they have “self-interest-self-profit” and in Chinese society, it is one of the most hurtful epithets you can call someone. In the first book of The China Trilogy (http://chinarising.puntopress.com/2017/05/19/the-china-trilogy/), 44 Days, I wrote about how this would be the ultimate, desperate slur I would call someone, who absolutely insisted on smoking in a crowded bus or train. I hated doing it, since it caused such a huge loss of face. So, it was always the third time to ask and this last time, they always put out their cigarette. The public shame of being recognized as zisizili was too much to bear.

To be selfish is anti-Buddhist, anti-Daoist, anti-Confucian, anti-communist and anti-socialist, as all these belief/societal systems are grounded in communal sharing and mutually beneficial cooperation. Selfishness is also anti-Indigenous nations and for them and all the other peoples around the world, who are fighting against imperialist capitalism and for social justice and economic equality, the struggle is never-ending.

4 thoughts on “Selfishness is enshrined in Western culture, while despised in Chinese and Indigenous civilizations. China Rising Radio Sinoland 181217”