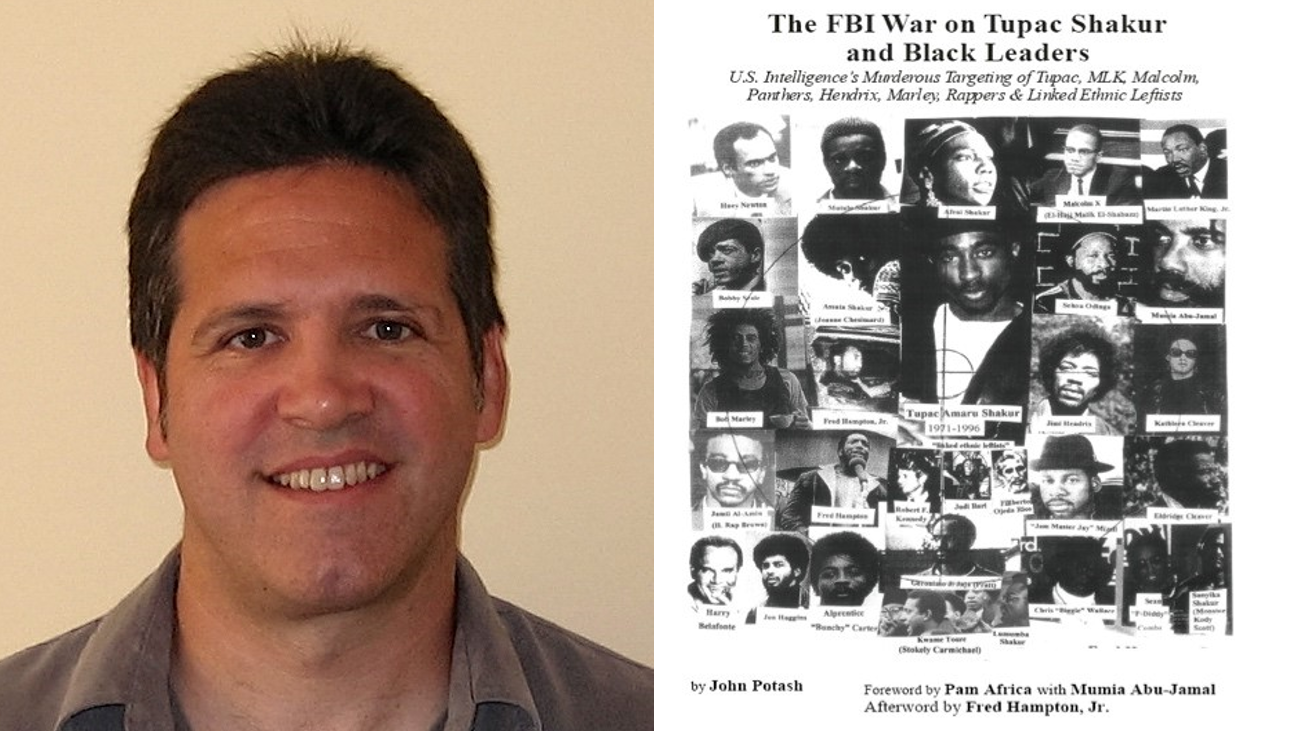 Pictured above: John Potash and his explosive, jaw-dropping book, “The FBI War On Tupac Shakur and Black Leaders – U.S. Intelligence’s Murderous Targeting of Tupac, MLK, Malcolm, Panthers, Hendrix, Marley, Rappers & Linked Ethnic Leftists”. And Americans think they live in a “democracy” with “liberty” and “freedom of the press”. What a sick joke!


I am honored to have Mr. John Potash on the show today, who has done some of the best journalism of the 21st century, if its definition is to expose the truth about the lies of empire.

John Potash has been featured on C-Span’s American History TV, A&E, The Reelz Channel, The Real News Network, and RT television networks. He has also been featured on hundreds of radio programs in the U.S, England and New Zealand, including Coast to Coast AM. He has published articles in Z magazine, Covert Action Quarterly, The Baltimore Chronicle, Rock Creek Free Press, and The Free Press. He has worked counseling people with mental health problems and addictions for over 25 years.

In May 2015, Potash released his book: Drugs as Weapons Against Us: The CIA’s Murderous Targeting of SDS, Panthers, Hendrix, Lennon, Cobain, Tupac and other Activists. Potash completed graduate studies at Columbia University. He published his first book, The FBI War on Tupac Shakur and Black Leaders, in 2007.

Today’s interview will be about John’s first book, which focuses on Tupac Shakur’s assassination.

I can’t say enough about John’s FBI War on Tupac Shakur book. His years of research and synthesis show just how psychopathic and paranoid the US’s elite rulers are. It is frightening to contemplate how organized and committed these mentally ill people are and the lengths they go to, in order to destroy any possible disagreement to their global capitalist stranglehold on the citizens, as well as all levels of institutions, governance and the media.

I think what make’s John’s fine book so compelling is all the minute details he shows about the extermination of black activists in particular, and all resisters who start making a difference, regardless of skin color or social status – all over the world. His detailed proof of just how pathological our owners really are, allowed me to step back from the nitty-gritty, down and dirty of the leaves on his trees, so I could really look at the whole global forest, and for this perspective, I am deeply thankful.

I cannot overestimate how important it is for all free thinkers and freedom lovers to read John’s FBI War on Tupac Shakur book. It’s not that expensive, but if money is issue, then ask your local library, school, college, university or place of worship to get it, so many others can share its wealth of discovery and truth telling. Failing that, several friends can pool their money to buy it. Using it in a book club would make for fascinating discussion as well.

Not a reader? There is the DVD below too, which is even less money! Libraries stock them too!

I asked John and he thought Fred Hampton, Jr., Chairman of the Prisoners of Conscious Committee (POCC) would be honored for me to reproduce his poem, that is published as an afterword in FBI War on Tupac Shakur. Thank you, Mr. Hampton, it is a moving and powerful testament, speaking truth to empire! Herewith,

How many more times are we to be buried before our time?

Framed up and chained up and placed behind enemy lines.

How many more Stokeleys to be snatched, Malcolms to be murdered,

and Khallids to be killed?

How many more frame ups on Fred? And Merle Africas coming up

How long before the Cinqué Magees, & Angola 3’s are to be

How many more set ups and wet ups, & FBI files?

How many more Assata Shakurs to be forced into exile?

How many more Mafundi Lakes must be taken away?

before you finally wise up & say enough is enough!

We’ve taken more than we can stand, and in all actuality,

that’s been entirely too much…

How many more Khalfuni Khalduns to be beat by prison goons?

And bad negroes named Goode will let you drop bombs on MOVE?

By the way, should the Minnesota 8 simply sit back and wait,

been framed by the state?

When will you demand the release of José Louis, Ralph Lee,

and the rest of those who’ve been framed by the police?

How much injustice can you stomach? How much more can you

will you sit back and let be attacked for fighting while black?

How many more Hugo Pinnels to be beat down in jail?

How many more resistors will you relinquish?

How many more Herman Bells?

And how long will justice be denied?