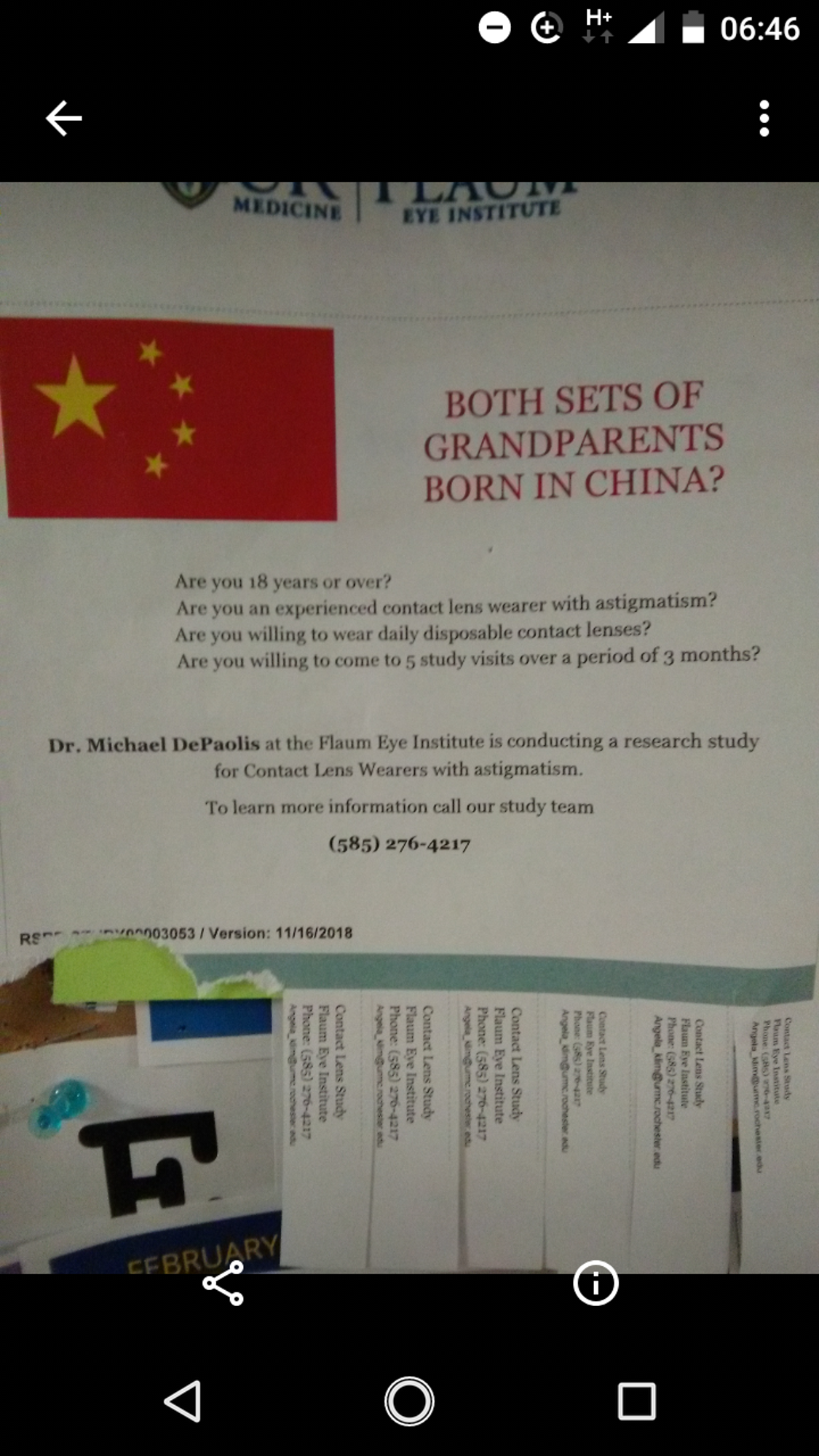 Pictured above: a public bulletin board announcement at the University of Rochester, New York, recruiting subjects who could only be 100% ethnic Chinese. For contacts lenses? Really? Or was it to collect their DNA?

I would like to thank a Mr. Jose, who sent the photo above to my colleague and friend, Godfree Roberts, who forwarded it on to me. It is more evidence of the US collecting Chinese and Slavic (Russian) DNA, likely to be used to develop race-specific microbes that only kill that group.

Mr. Jose took the photo the winter of 2018-2019, just a year ago. It is one of those announcements seen all around schools and on grocery store public bulletin boards, with the little tear-off contact tabs below. Angela Mim’s email was on the tabs, as well as the phone number of the Flaum Eye Institute, which is part of the School of Medicine at the University of Rochester in New York. Dr. Michael DePaolis was conducting this study.

The ad displayed the Chinese flag with an all-caps teaser. The flag of China is a nice touch, appealing to Chinese students’ sense of national pride,

Astigmatism/near sightedness is a common problem among East Asian peoples, not just Chinese, but Korean and Japanese as well. As Mr. Jose said in his email, are Korean and Japanese eyes really that different? Nor could the study fall back on the excuse that Chinese people have epicanthal eyes, meaning they have the classic oriental hooded eyelids, since this is also very true across East and Southeast Asia, including many Vietnamese, Cambodians, Laotians, Thais and Myanmas, along with the aforementioned countries.

Wouldn’t contact lenses for ethnic Chinese work just as well for all the peoples of East and Southeast Asia? So, why the incredible specificity of this “contact lens study” that guaranteed the subjects would have 100% Chinese DNA?

It sure looks like the study was a lot more about DNA collection, than helping Chinese overcome astigmatism and near sightedness.

Mr. Jose took this photo a year ago, because that was the time when the Russians were protesting fake Western NGOs collecting their DNA all over the country. Since then, in our interview and my follow-up article, Uriah Heep shows conclusively that similar bogus outfits were doing the same thing in China, as far back as 2003 (remember SARS?) and up to last year. One of the Chinese DNA thieves was Harvard. All of this is fully explained here,

The University of Rochester, Flaum Eye Institute and Dr. DePaolis may have been willing participants in DARPA’s (Defense Advanced Research Projects Agency) Chinese DNA collection program to develop race specific bioweapons, or were just innocent dupes, sending tissue samples on to a fake-named laboratory with a P.O. Box. We’ll never know. But, it’s safe to say that no matter the excuses, this is clear evidence of Chinese citizens being used as guinea pigs to collect their DNA.

I can smell the germ warfare from here.

One thought on “Why was University of Rochester recruiting medical subjects, when the baseline requirement was they had to be 100% ethnic Chinese? Looks like DNA collection to me. China Rising Radio Sinoland 200222”