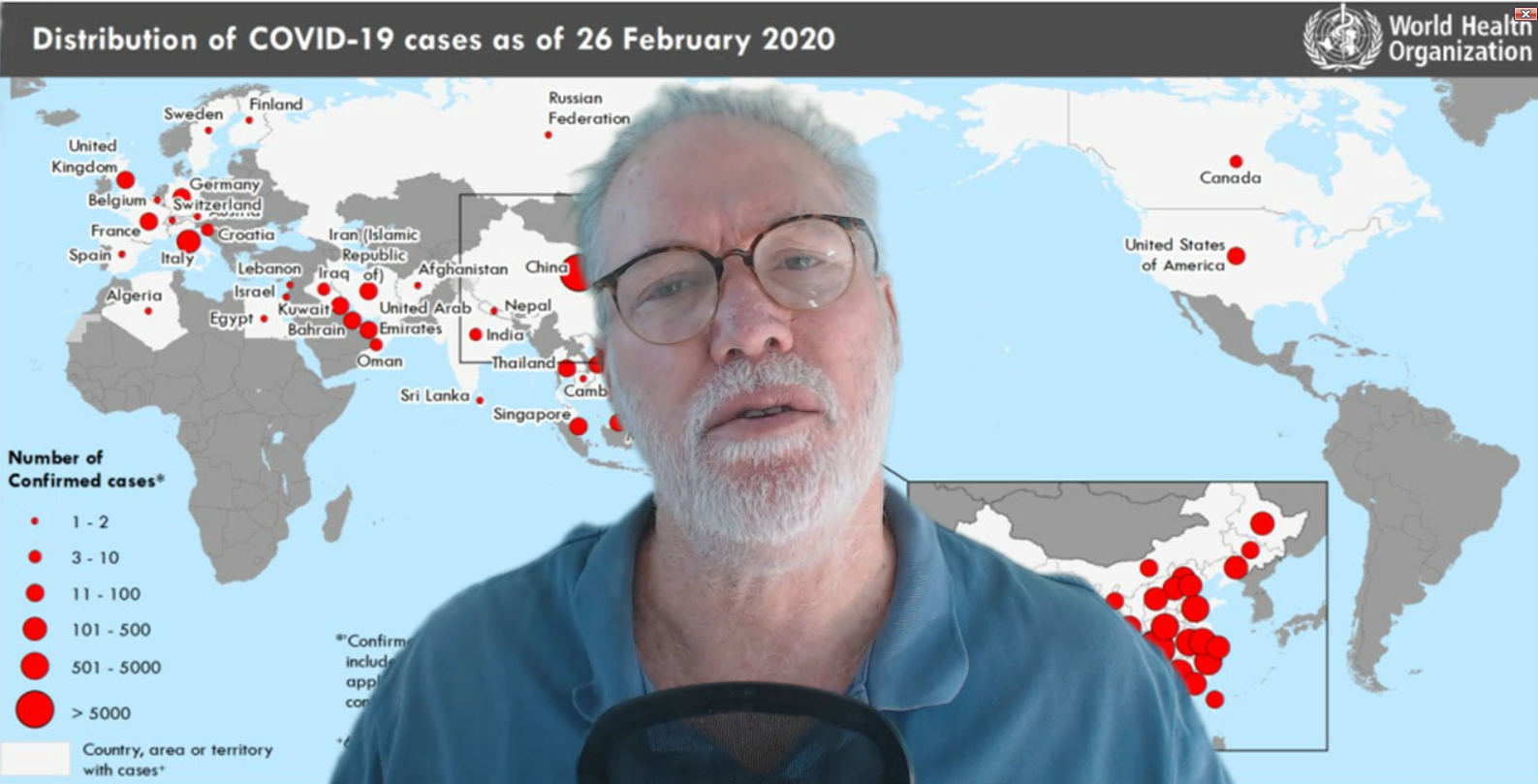 Pictured above: it is not a coincidence that over 98% of global Covid-19 deaths in all the countries are ethnic Chinese. Learn why.


According to the World Health Organization’s (WHO) Situation Report (SITREP) #37, dated February 26, 2020, 98.4% of all Covid-19 deaths around the world are ethnic Chinese (www.who.int 20200226-sitrep-37-covid-19). This percentage is probably higher, since statistics are reported by nationality and not ethnicity. Over 50 million ethnic Chinese live around the world. This numbers will change as time goes, but the proportions likely not.

It is almost impossible to know the ethnicity of those affected or who died from Covid-19, because this information is almost never reported, one could even say suppressed. Yet, it is as clear as day that your genes determine whether you contract Covid-19 or die from it. It is the 800-pound epidemiological gorilla on the global stage that everybody avoids like the plague, pardon the pun.

We can start with SARS, another very suspicious epidemic that broke out in Southern China, 2002-2003. It was hard as heck to find out the ethnicity of those who died – nowhere to be found outside China – but I learned on a Chinese website that 96% of all global deaths were ethnic Chinese (http://dy.163.com/v2/article/detail/DRC3FE410517SUJ7.html). Yet, in the final 2003 WHO SARS Consensus Report (WHOconsensus), this extremely critical statistical data set was completely censored. This cannot be an accident…

Under Section 2.2, Risk factors for SARS, health care workers, environmental contamination, increasing age, male sex and the presence of co-morbidities, air travel – heck, go ahead and throw in the kitchen sink – but, the risk factor of being ethnic Chinese is censored.

Section 2.3, Special populations requiring investigation, includes SARS in children and SARS in pregnancy are the only two mentioned. That’s standard boiler plate medical yakety-yak. Have you ever seen a study on illnesses that does not warn about children and pregnant women? Yet, the fact that 96% of those of died of SARS being ethnic Chinese is not a special population requiring investigation. Talk about politics trumping scientific truth!

If being ethnic Chinese is THE overwhelming criterion for catching and dying from SARS, shouldn’t that be noteworthy, especially if you are Chinese? And the same is proving to be the case for Covid-19, yet being ethnic Chinese is even more critical, given the numbers to date. Conversely, not being Chinese is just as important for all other ethnic groups. For them, the level of fear and loathing immediately plummets, but don’t tell your owners that.

As well, nobody wants to admit that unless you are old, the chances of dying of Covid-19 are very small indeed. This chart from Chinese sources proves the point (https://www.nextbigfuture.com/2020/02/coronavirus-fatality-statistics-by-age-gender-and-conditions.html), 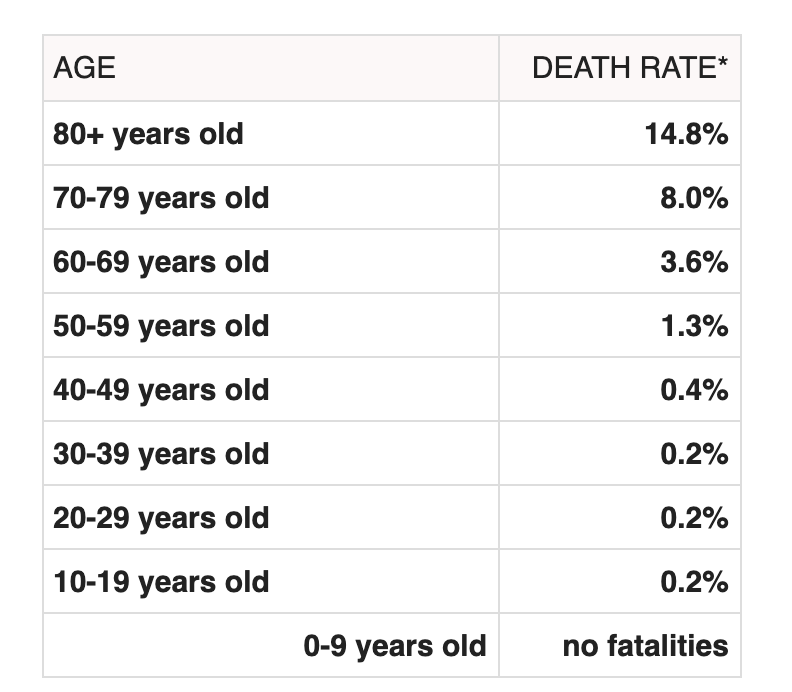 If you are Chinese, old and already sick, your chances go up more, 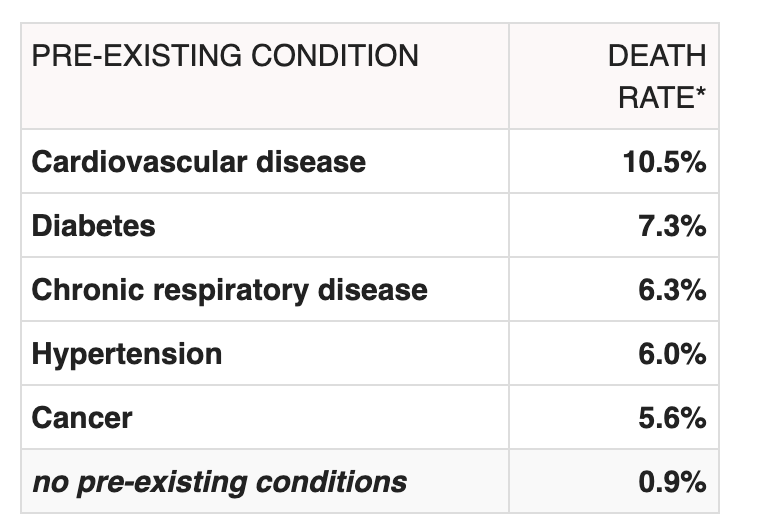 Who’s dying of Covid-19? Old people, Chinese or otherwise, since if you glean the ex-China global news, most are also reported to have already been in poor health. Notice that no Chinese children have died from it!

To sum up, if you are 60 years or older, you may get sick, and if you are old and already in poor health, you have an increased chance of dying, but if you are younger, healthy and even being Chinese, you have a 99% of surviving. Are you White, Black, Brown, Red, other Yellow, younger and healthy? Then dying from Covid-19 drops to a statistical goose egg. Go take a walk in a crowded fresh market. You have more of a chance of dying from all the other non-Chinese flu viruses that kill and make ill millions of people around the world each year (https://chinarising.puntopress.com/2020/01/29/valid-comparative-statistics-expose-lies-you-are-being-brainwashed-into-fear-porn-coronavirus-chicken-littles-just-ask-goebbels-and-hitler-china-rising-radio-sinoland-200129/). They mutated naturally to attack all humans.

In a very interesting research paper C. L. Chen of Soochow University and his team showed that ethnic differences do exist in epidemics (Ethnic differences in susceptibilities to A(H1N1) flu [African Journal of Biotechnology, 2009]). It reported that there have been cases where particular ethnic groups had very high mortality rates from influenza epidemics. However, they were small, isolated Natives in the far northern Lapland of Scandinavia, Innuits above the Arctic Circle in Canada or isolated American Natives. Why did they have devastating mortality rates during the global “Spanish” flu epidemic in 1918? Because, they had never been exposed to livestock and poultry production, which over time infects and immunizes people from all kinds of critters.

This cannot be said about the Chinese, who, along with Mesopotamia and India, developed extensive agriculture more than 5,000 years ago. Nor, with the Maritime and Euro-Asian Silk Roads being human and animal superhighways in and out of China for 3,000 years, can we say the Chinese have not been exposed to just about every microbe that infects livestock and humans.

Unlike SARS and Covid-19, naturally mutating viruses are not so DNA specific. For sure, bio-engineered viruses can be created that target a specific ethnic group and in the Project for the New American Century’s report, Rebuilding Americas Defenses–Foreign Policy Initiative, Western oligarchs were lusting for ethnic bioweapons stating,

The US’s military biowarfare program, DARPA, is in the business to genocidally exterminate Western enemies with Frankenstein viruses and bacteria. It’s what they do. It’s their raison d’être and your Eurangloland taxes are paying for it. DARPA is the one that has been creating mutant coronaviruses from bat sources for years (https://www.unz.com/wwebb/bats-gene-editing-and-bioweapons-recent-darpa-experiments-raise-concerns-amid-coronavirus-outbreak/).

This can only lead to one conclusion: SARS and Covid-19 were developed in bioweapon laboratories. With these viruses targeting ethnic Chinese, one can safely assume that foreign elements who perceive China to be an enemy to be destroyed, were the ones who developed it. Knowing the truth about the ethnic specificity of SARS and Covid-19 immediately destroys all the ludicrous suggestions in the West’s Big Lie Propaganda Machine (BLPM), that Covid-19 was created in Chinese labs. If China made a bioweapon, it would not target its own people.

So, for SARS and Covid-19, cui bono? Who benefits from all the economic destruction in China and the hysterical, racist, anti-Chinese propaganda consciously and subconsciously saturating the global media these days? I can only think of one source: Eurangloland. Western countries have hundreds of bioweapon labs on every inhabited continent and have a long and sordid history of using germ warfare on their own people and enemies alike (https://chinarising.puntopress.com/2018/03/31/the-face-of-western-imperialism-exposed-by-ebola-from-china-rising-capitalist-roads-socialist-destinations/). The United States has even already attacked China with germ warfare during the Korean War (www.bioweapontruth.com)! Harvard stole untold thousands of in-country ethnic Chinese DNA samples for 10 years, right up to SARS (https://chinarising.puntopress.com/2020/02/25/harvard-illegally-collected-dna-samples-in-china-throughout-the-90s-right-up-to-sars-lies-upon-lies-and-many-cover-ups-have-kept-this-criminal-conduct-hidden-in-plain-sight-looks-like-bio-engineere/) and it is proven that Rochester University selected medical subjects who could only be 100% Chinese DNA, with ample opportunity to collect samples (https://chinarising.puntopress.com/2020/02/21/why-was-university-of-rochester-recruiting-medical-subjects-when-the-baseline-requirement-was-they-had-to-be-100-ethnic-chinese-looks-like-dna-collection-to-me-china-rising-radio-sinoland-200222/).

Thus, we have the modus operandi (proven track record) for Eurangloland, as well as the means (hundreds of bioweapon labs across Planet Earth). That leaves a motive. All you need to do is look at the headlines since 1949, when China became a communist-socialist powerhouse, to see that the People’s Republic has long been global capitalism’s Public Enemy Number One, to be destroyed any way possible. The China Trilogy (https://chinarising.puntopress.com/2018/06/30/praise-for-the-china-trilogy-the-votes-are-in-it-r-o-c-k-s-what-are-you-waiting-for/) grippingly goes through this whole story, every step of the way.

In a court of law, proving the means, the modus operandi and the motive is called a preponderance of evidence and thousands of defendant people, governments and corporations have been convicted in civil court under similar scenarios. My exposés on SARS and Covid-19 on CRRS are ample evidence to this case.

Friends, fans and followers of China Rising Radio Sinoland, the preponderance of evidence proves that Eurangloland, especially the United States, is guilty of bioterrorism in attacking China with SARS and Covid-19.

This is so painful for most people to accept, even for Chinese, that denial is the first line of defense. My wife is a case in point. After looking at the whole situation, she reluctantly accepts that Eurangloland, or at least the US, most likely perpetrated this crime against humanity. Yet, she is overwhelmed with powerful emotions to admit the truth; her disappointment and disgust are palpable.

But if humanity ever hopes to survive into the 21st century, we all need to stare reality in the face and smite the demons destroying us and Planet Earth. I’m sad to say, history, at least since the 15th century, amply demonstrates that the vast majority of our demons have Western DNA.

2 thoughts on “Almost 100% of all Covid-19 deaths around the world are ethnic Chinese. SARS was 96%. Why almost no Whites, Blacks, Browns, Reds and other Yellows? What does this tell us? You need to know the truth. China Rising Radio Sinoland 200304”