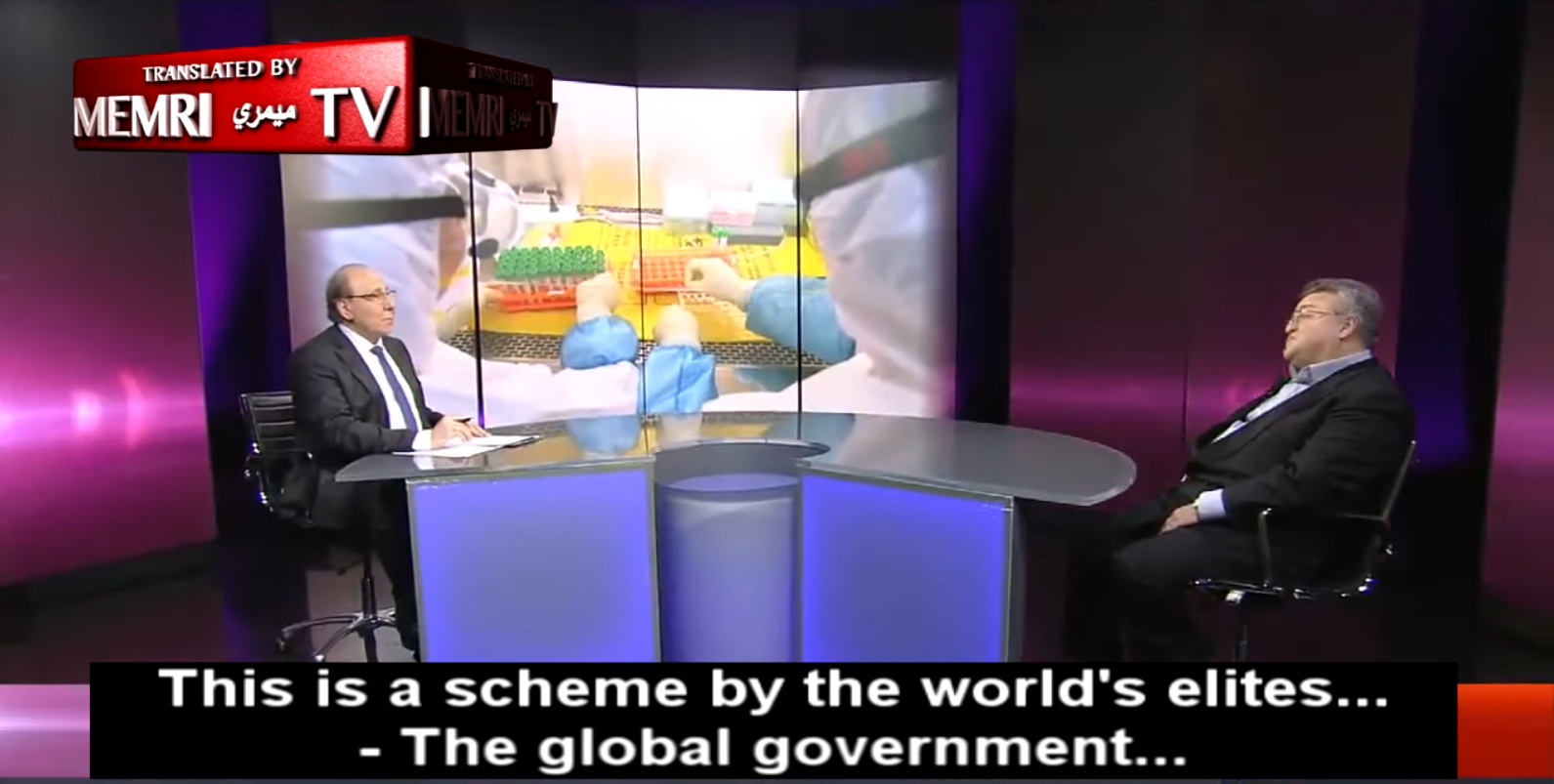 Pictured above: news from outside the Great Western Firewall almost never gets seen or heard in the MSM, thanks to the Big Lie Propaganda Machine (BLPM). Bioweapon and chemical warfare expert Dr. Igor Nikulin fits that category and has some very revealing points to make that you need to know about.

This is a short, but fascinating interview segment that you would never see in the MSM, behind the Great Western Firewall. Dr. Igor Nikulin was a member of the UN Commission on Biological and Chemical Weapons, which means he knows what he’s talking about.

You can watch the four-minute clip here. It’s a little disconcerting, since the show is in Arabic and Dr. Nikulin’s responses in Russian are being translated into the former language. For English speakers, focus on the written translation at the bottom of the screen,

If you can’t access YT, I uploaded it for you,

And if all else fails, MEMRI (Middle East Media Research Institute) was nice enough to provide the English interview transcription below.

I wanted to offer this to China Rising Radio Sinoland, since it supports what I wrote in my previous article/podcast (https://chinarising.puntopress.com/2020/03/16/kim-iverson-reports-the-same-geopolitical-observations-about-biowarfare-your-passport-has-a-lot-to-do-with-your-exposure-to-covid-19-the-ramifications-for-you-and-your-loved-ones-is-explained-china/),

That is, Covid-19 is a US biological weapon to attack and destroy global capitalism’s anti-imperial enemies. If it further develops into a global pandemic, Western oligarchs win as well, since for over 200 years, they have wanted to eugenically cull humanity’s 99%.

Hats off to MEMRI for making this important interview segment available in English.

Russian biologist Igor Nikulin, who was presented as a former member of the U.N. Commission on Biological and Chemical Weapons, said in a February 27, 2020 interview on Russia Today’s Arabic-language channel that he believes it is no coincidence that the coronavirus has had the effect it has in China, Iran, and certain European countries. He said that coronavirus was carefully selected to affect countries that rival the United States and that it is a conspiracy by the “global government,” which he said consists of 200 families that control over $400 trillion  [note, their typo, should be $40 trillion], that own the media outlets and Hollywood, that control the minds of humanity, and that want to decrease the world’s population by 90%. He suggested that it may be possible that coronavirus is a targeted biological weapon, like he said Ebola and the bird flu were, that infects some people and not others, and he said that the U.S. government may be testing a pathogenic agent it began developing in 1999. Nikulin also said that this is a warning to the non-English-speaking world that it must submit to the laws that are imposed upon it.

Igor Nikulin: “I believe that it is no coincidence [that China was infected with coronavirus]. I believe that this virus was selected very carefully, in order to reach countries that are considered to be America’s rivals, such as China, Iran, and some EU countries including Italy. Many people think that there are pro-Russian tendencies in those countries, and this is why we see more infected people in those countries. I don’t think that this is a mere coincidence. This is a scheme by the world’s elites…”

Igor Nikulin: “Right. The global government is the correct term. At least that is what they call themselves. No one elected them but this is how they see themselves. These 200 families have $40 trillion, and they consider themselves to be the most important people on Earth. They own most of the media outlets. They are the ones making the Hollywood movies – for example, they make movies about pandemics. These families control the minds of humanity, and claim that humanity must be reduced to one-tenth of the current population.”

Interviewer: “Is it really possible to produce biological weapons that target a specific nation or ethnic group, and that may infect them but not others? There were reports that the Israelis were thinking about producing – or have actually produced – some sort of biological weapon that kills Palestinians but does not harm other Israelis. Is it true? Is it possible?”

Igor Nikulin: “People talk about this. I know that a few years ago, there was a strange epidemic in Madagascar. It was not in Africa. It was a pneumonic plague, which is a horrible thing. This epidemic killed only the locals, while it did not harm European tourists, and not even the yellow race. There is also, of course, weapons such as Ebola, Avian Influenza, and the coronavirus that is currently infecting mostly Chinese and other Asian peoples. Such weapons exist. In 1999, the Americans started a project… The head of the CIA at the time, George Tenet, and President Clinton said that they would produce pathogenic agents that would affect certain races but not others. Twenty years have passed and the time for field experiments has come. It seems that planet Earth has been turned into a testing ground. I’ll go even further and say that the Anglo-Saxon countries have issued a biological warning to all non-English speaking countries: ‘Either you live according to the laws we impose on you, or you will not live on this planet. Either we kill you fast or we kill you slowly.’ This is the main problem of modern world policy.”