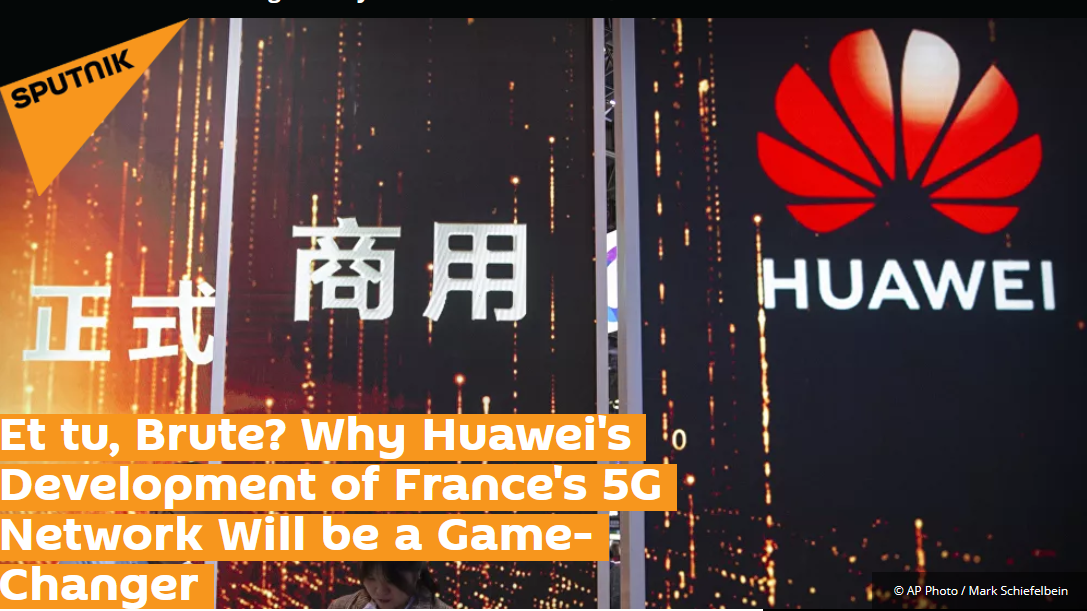 Sputnik News contacted me to participate in a composite article, where several journalists make a contribution to the finished product. This one is about France continuing to work with Huawei, for obvious reasons I have pointed out numerous times (https://chinarising.puntopress.com/search/?q=huawei).

Here is the source article: https://sputniknews.com/analysis/202003211078647791-et-tu-brute-why-huaweis-development-of-frances-5g-network-will-be-a-game-changer/

On 12 March, Reuters broke that France would permit the use of some Huawei equipment in the country’s future 5G infrastructure, citing two sources close to the matter. According to observers, European states are defying Washington’s diktat and opening the door to Huawei because they want to gain a competitive edge.

According to the unnamed sources, ANSSI, the French cyber-security agency, has opted to use some of Huawei’s 5G apparatus in non-core parts of France’s networks.

It was earlier reported that the Chinese telecom giant was planning to build a manufacturing plant in France to produce radio equipment for 5G. The news came amid the US crackdown on the tech firm over concerns that Huawei was allegedly using its gear to spy on behalf of the Chinese government, something that the company vehemently denied.

If it is confirmed that Paris is willing to embrace Huawei’s 5G technology France would become yet another European country (after Britain) to defy Washington’s diktat on Europe’s telecom strategy. While recommending tougher rules on foreign vendors in late February Germany’s governing coalition also fell short of banning Huawei’s 5G equipment.

“If the Reuters story we’ve been reading is correct, – there is an ‘if’ here! – the decision to give Huawei a key role in the development of France’s 5G network will be a game-changer”, says Anthony Glees, a professor of politics at the University of Buckingham.

According to the academic, it would be, first, a vote of confidence, even if as yet only limited, in Huawei; and, second, “a strong blow” to Donald Trump and “in its own way an act of solidarity with Brexit Britain”.

​The professor recollects that on 28 January, UK Prime Minister Boris Johnson announced that Britain was giving the green light to Huawei to build up to 35% of the country’s overall communication networks. Responding to Washington’s repeated warnings against using Huawei’s equipment Johnson highlighted that “the British public deserves access to the best possible technology”.

“Of course there is a risk to France’s national security, just as there is to Britain’s”, Glees suggests. “On the other hand, the security risk posed by Huawei has to be balanced by the economic risk of not giving Huawei the contract”.

The professor envisions that some will see this decision, if it has indeed been taken, “as a further sign of the new entente cordiale between Britain and France and a hint from both nations that under Donald J. Trump the USA is not to be followed blindly”.

US Can’t Offer a Credible Alternative

Benjamin Cavender, principal of the Shanghai-based China Market Research Group, points out that the UK and France “are taking a mixed approach to Huawei”.

“Rather than banning it as the US would like, they are instead allowing Huawei products to be used for parts of new 5G networks while at the same time minimising security risks”, he highlights. “This keeps the door open to do more business with China and tries to balance diplomatic fallout at the same time”.

Though Washington is likely to be displeased with France’s decision to use some of Huawei’s 5G equipment, the truth of the matter is that “at this stage the US can’t really offer a credible alternative“, the economist says.

“A response may be to increase tariffs but that is a no win solution as both economies are already set to see a significant hit due to fallout from COVID-19”, Cavender foresees.

Jeff J. Brown, the editor of China Rising Radio Sinoland, China Tech News Flash!, and author of The China Trilogy, deems that “France, like all American allies is caught between a rock and a hard place”.

“The United States is used to bullying them to favour US business interests, but Paris knows that the West – the US in particular – has been caught completely flat-footed in 5G development and deployment, with China having a 5-10 year lead in what is the most critical global technological innovation of the early 21st century”, the author elaborates.

Brown remarks that while “the West is used to being top tech dog, with little to no competition” it is now being challenged not only by Huawei but ZTE and 100 other secondary and tertiary Chinese 5G companies.

“In a nutshell, China, led by Huawei is bigger, better, faster, and cheaper for 5G than any other game on Planet Earth”, the author stresses. “Without 5G, cutting edge innovations in aerospace, military, artificial intelligence (AI), Big Data, Internet of Things (IoT), medicine, energy, manufacturing, infrastructure, and logistics – not to mention warp speed telecommunications – are all seriously circumscribed. Either adopt 5G now, or be relegated to faded, 20th century glory”.

He highlights that given France’s ambitions the country does need 5G to maintain its leading positions in space, infrastructure, and nuclear energy technology.

“Thus, we will continue to see Paris, London, and Berlin appease and flatter the imperial bully across the Atlantic, while quietly working with Huawei and China’s unbeatable 5G juggernaut”, Brown concludes.

3 thoughts on “Et tu, Brute? Why Huawei’s Development of France’s 5G Network Will be a Game-Changer. China Rising Radio Sinoland on Sputnik News 200326”