Pictured above: US Democratic presidential candidate Joseph Biden showing what a hollow farce USA democracy is, sporting a flyswatter to milk donations out of the public and make fun of Republican vice-presidential candidate Mike Pence, who unknowingly had a fly land on his hair during his debate with Biden’s VP running mate, Kamala Harris. Western society of the spectacle has been going on since Ancient Greece. This, compared to China’s people powered communist-socialist democracy, which is all business, all the time, high expectations starting 5,000 years ago.

In case you missed the entirely missable, during the USA vice-presidential (VP) election debate this week, a fly landed on the head of Donald Trump’s VP, Mike Pence for a couple of minutes, which he didn’t notice, whereupon the little critter went on its merry way in the TV studio. 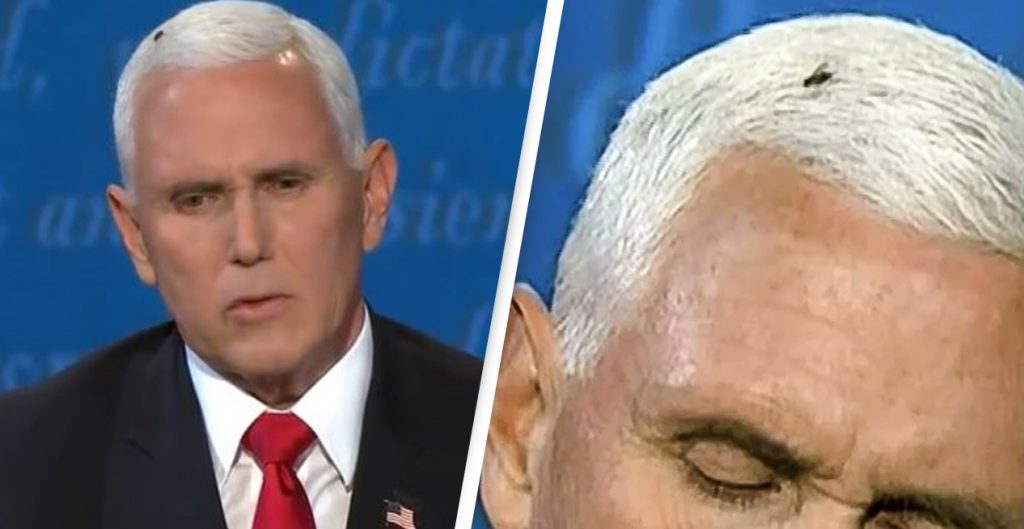 Since Western “democracy and freedom”, especially the USA variant is such a Vaudeville show of vacuous entertainment, this fly became the focal point of the debate. Everything else of substance, like the fate of the human race was quickly forgotten. Before the debate was even over, t-shirts, coffee mugs, and flyswatters were for sale (https://sputniknews.com/us/202010081080708399-flies-dont-lie-fly-swatters-and-im-speaking-shirts-offer-lasting-memories-of-vp-debate/). 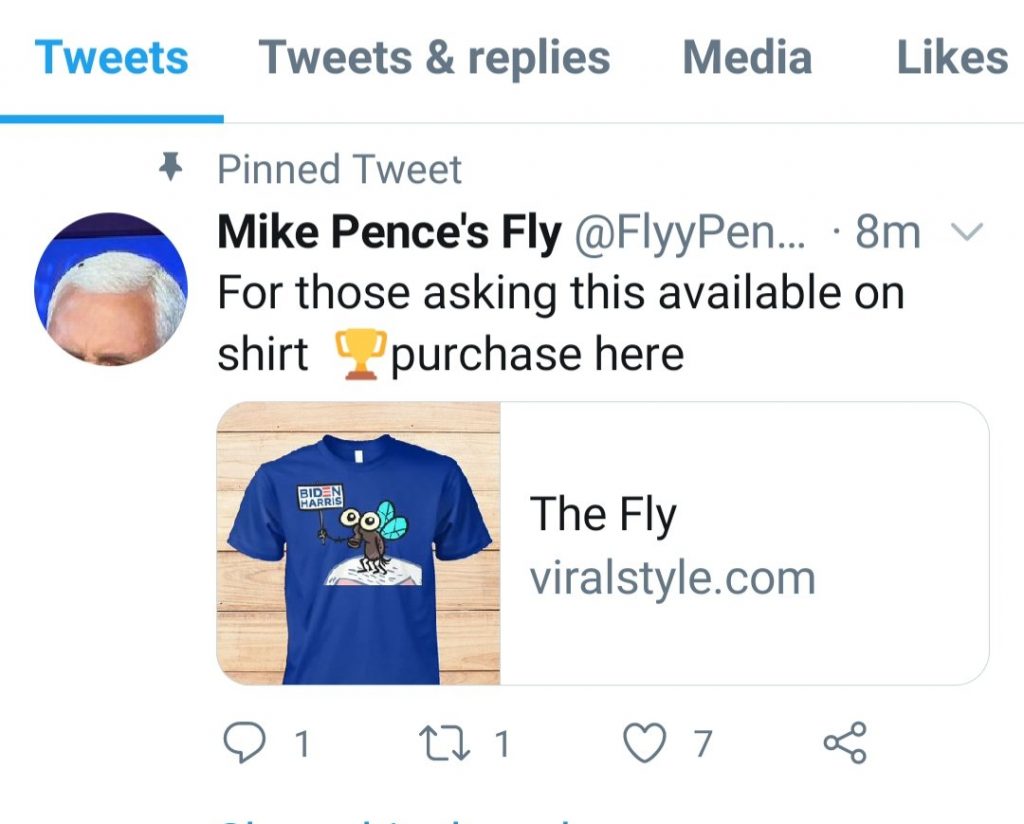 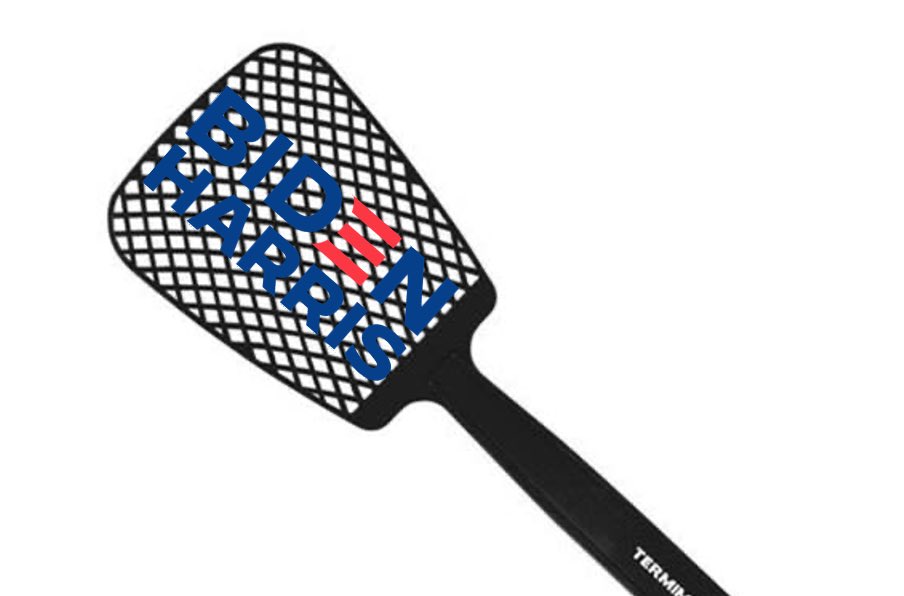 Immediately, opposing Democratic presidential candidate Joe Biden tweeted a photo of himself holding a flyswatter, hustling money with the word play tag, Pitch in $5 to help this campaign fly (https://mobile.twitter.com/JoeBiden/status/1314031047013732352/photo/1). 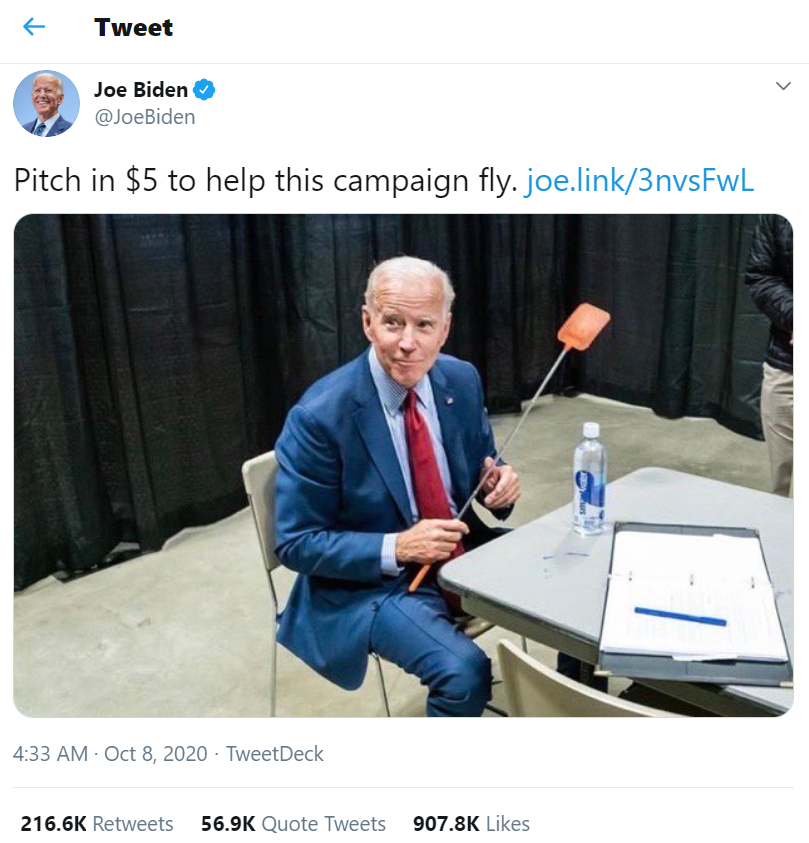 Within hours, it got over 200,000 retweets. Biden piled on the play-on-words with, Truth over Flies flyswatters, selling them out for $10 each (https://store.joebiden.com/truth-over-flies-fly-swatter/).

PETA (People for the Ethical Treatment of Animals) had to make some hay on the deal, announcing they were sending a “humane bug catcher” to Biden (https://www.breitbart.com/politics/2020/10/08/peta-sends-humane-bug-catcher-biden-release-campaign-fly-swatter/).

As Morris Berman and I discussed, the USA and its leaders are a nation of hustlers, grifters and conmen (https://chinarising.puntopress.com/2019/03/09/morris-berman-talks-about-how-the-american-dream-is-destroying-earth-and-hopes-for-the-future-china-rising-radio-sinoland-190309/).

Within minutes of the debate, Twitter, Facebook, Instagram, YouTube and all the other Big Lie Propaganda Machine (BLPM) foghorns were flooded with new fly-related accounts and inane, absurd humor about how the fly should quarantine for Covid, Black Flies Matter, Lord of the (F)lies, Lies Attract Flies, ad nauseam. Within hours, one brand new Twitter account, Mike Pence’s Fly (double entendre for his pants zipper) got over 122,000 followers. 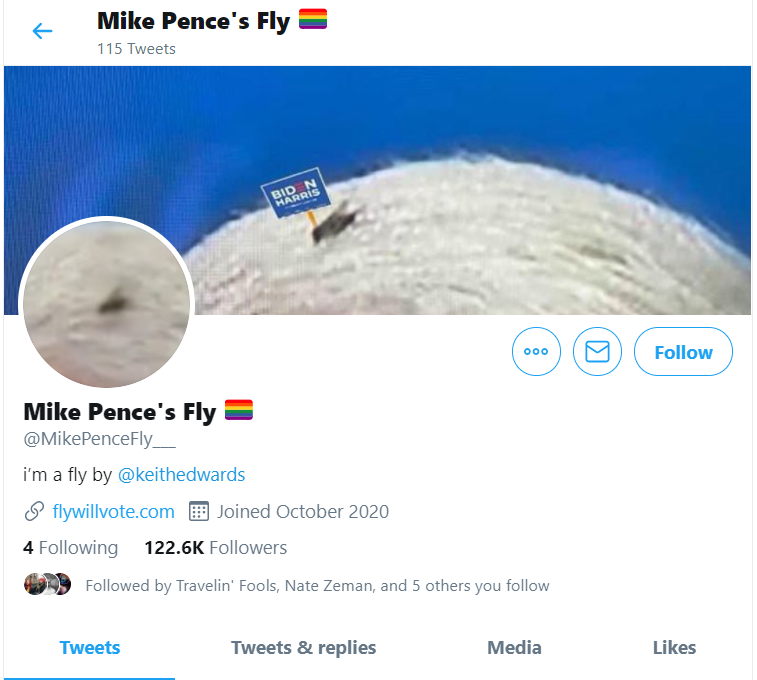 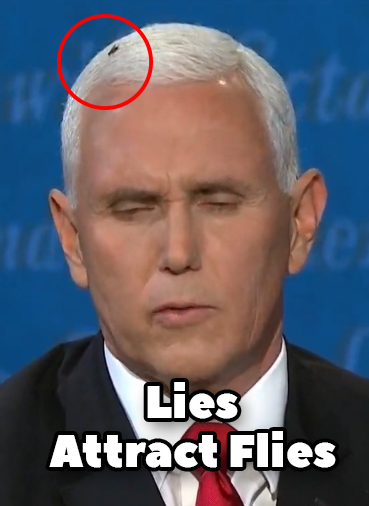 What is so pathetically sad is all this passes for participatory democracy and freedom in the West. But, this has been true for 3,000 years, since Ancient Greece and the Roman Empire. Governance and leadership are reduced to the crassest, most base entertainment. Panem et circences, Latin for bread and circuses has not changed one iota since then. Politicians are not chosen as leaders for their managerial, technical/educational skills and a lifetime of service to the people, but those who are the best actors, best speakers, the most charismatic/photogenic, and often already among the rich and powerful. Government bodies are like theaters of the absurd, where Parliamentarians routinely shout each other down, have shoving matches, fist fights, and where press conferences are highly controlled and managed affairs looking for “gotcha” moments to blast all over the BLPM. Identity politics pound the 24/7 propaganda cycle like a mind-numbing drum.

Illicit sex, pedophilia, drugs, high crimes, corruption, malfeasance, incompetence and cronyism are the venue of the day among the West’s leaders, the occasional Charles de Gaulle and Franklin D. Roosevelt excepted. For millennia, we have been so inured to expect the worst, that we don’t even give it a second thought. I asked my wife to list all the outstanding French kings, she said there was only one who was considered “good” and that was the canonized Saint Louis, who rendered a little justice for the poor against the rich. In reality, the church honored him, as he oversaw the genocide of millions of Muslims and Slavs during the Crusades, and the theft of billions of (in today’s) dollars/euros in stolen booty. Go ahead, try to find a Western royal, aristocrat or oligarch who has broadly served the interests of the poor and the landless. The ones who did got ousted or murdered, like Julius Caesar, who was in reality a populist, as explained by Michael Parenti (https://www.youtube.com/watch?v=_IO_Ldn2H4o&feature=emb_title).

This Western phenomenon of governance and democracy as a spectacle for entertainment was vividly captured by French philosopher Guy Debord, in his much-cited work, The Society of the Spectacle (1967), which can be read for free in English here (https://www.marxists.org/reference/archive/debord/society.htm). For an excellent, illustrated summary, read here (https://hyperallergic.com/313435/an-illustrated-guide-to-guy-debords-the-society-of-the-spectacle/). Mr. Debord then followed it up with a shorter, second work called, Comments on the Society of the Spectacle (1988-  http://www.notbored.org/commentaires.html). While not light reading, both are highly recommended, as Debord was way ahead of his time. I strongly suspect that the Wachowski Brothers read him before they made The Matrix movies (https://mitvisualarts2014.wordpress.com/body-extension/euipoom-yoon/week-7/).

Contrast this to Chinese governance and leadership, which for millennia have been founded on merit, competence and practical experience. Care and concern for the masses and have-nots have always been the first rule of order for Chinese leaders. The West counts citizen-centered leaders on one hand. China counts its bad leaders with the other one. You sure are not going to see Chinese leaders at any level waving a flyswatter to mock an opponent. Governance is considered serious work, whether you are a village leader or the president of the country, like Xi Jinping.

As I have explained in great and interesting detail in The China Trilogy (see below), the Chinese have had much more consensual and participatory democracy than the West has ever had, especially since their communist-socialist liberation in 1949 (https://chinarising.puntopress.com/search/?q=democracy). I know this flies (pardon the pun) in the face of everything you’ve been taught since birth, but after living and working there for 16 years, I can tell you it’s true.

For most of China’s history, leaders have tended to be people-centered, competent and well-seasoned, often coming up through the ranks of one of the world’s most brutal meritocracies, more so since 1949.

Want more proof? Below, is a short book review of millennia of Chinese writings, which explain the bottom line for Chinese leaders and how they are expected to do the right thing for the broad majority of the masses. It is called The Governing Principles of Ancient China,

You can download the PDF file at the end of the above article/podcast. It’s an easy book to read and since there are 365 short passages for each day of the year, it can be digested over a period of time. This kind of Leadership Handbook is a utopian pipe dream for Eurangloland’s citizens. They’ve never had the pleasure to live it.

The West’s carnival barking, three-ring circus, huckster “democracy” is truly entertainment at its best and Donald Trump’s over-the-top Twitter presidency has taken it to new heights of mirth and enjoyment. Why watch TV or go to the movies? Just follow the 24/7 propaganda cycle. While it’s great for popcorn sales and good fun for the citizenry, it lulls them into believing they really have a choice and are represented by their governments. That was somewhat true for Whites during the 1930s-1970s and Blacks in the 1950s-1970s, but what little they got was all clawed back starting in the 1980s, and now with no end in sight, the oligarchs are digging deep into societal flesh. As hard as it is to confront the ugly truth, the Covid plandemic is their last gasp lunge to take what we have left and it fits their historical modus operandi (https://chinarising.puntopress.com/2020/09/10/im-going-to-be-as-popular-as-the-plague-for-this-very-unwanted-report-pardon-the-pun-covid-is-no-more-dangerous-than-the-seasonal-flu-the-statistics-tell-the-truth-then-why-the-p/).

For 3,000 years, Western governance has been aristocratic, plutocratic and there to serve and enrich the 1%, with breadcrumbs and table scraps for the masses, just long enough to stave off meaningful, bottom-up revolution. There are even words for it. Kakocracy is rule by the worst, most despicable of the people – called kakocrats – who lord over their suffering, exploited and oppressed subjects in a kakistocracy.

That perfectly sums up Western governance for the last 3,000 years.

Meanwhile, communist-socialist China continues to prove itself to have one of the most resilient, consensual, participatory democracies on Earth, where the wants, needs and dreams of the 99% are the #1 expectation among the leadership. These kinds of public aspirations go back millennia.

Given all this, is it any wonder that China keeps pulling further and further ahead of the West? Over time, isn’t taking care of the 99% going to win out over endlessly enriching the 1%?