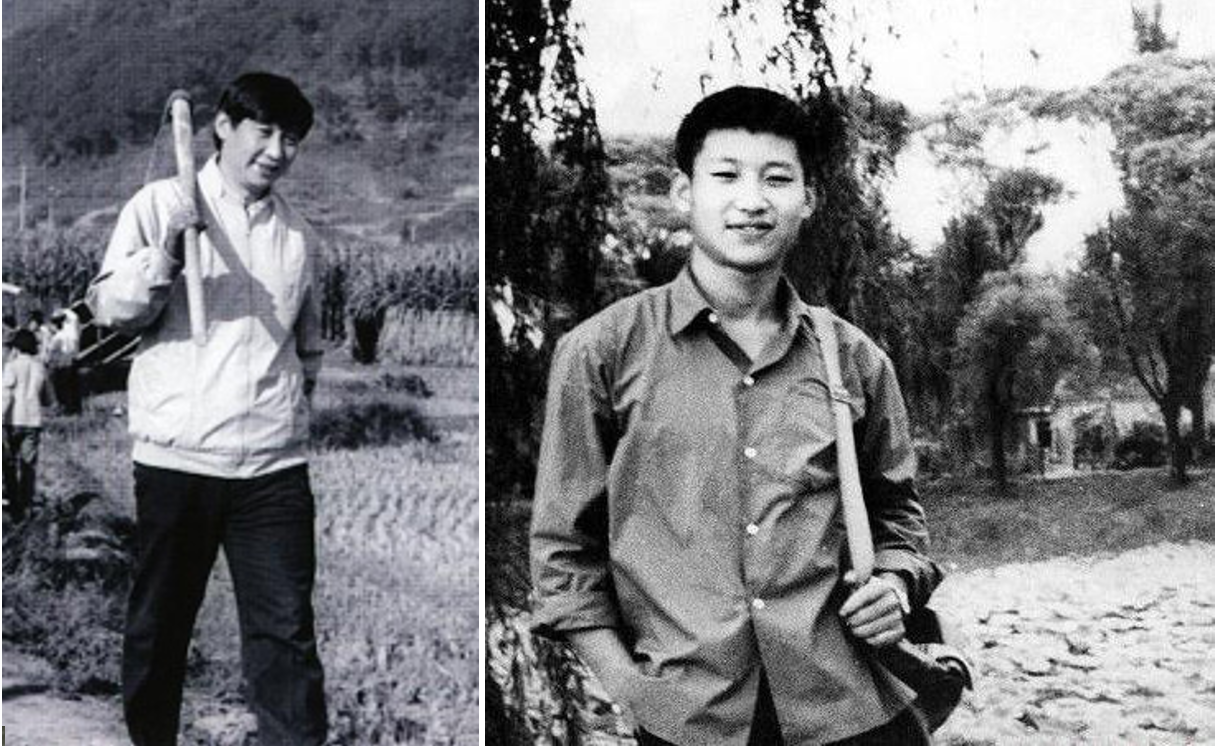 Pictured above: young Xi Jinping during the Cultural Revolution, where he was sent to the countryside to work and live like a peasant for seven years. He always says he left a boy and came back a grown man.

Since Xi Jinping got elected president, I reported earlier that Baba Beijing has softened its criticism against the Mao Era in general, specifically the Great Leap Forward and Cultural Revolution (https://chinarising.puntopress.com/2019/04/14/its-the-cultural-revolution-all-over-again-well-kinda-sorta-china-rising-radio-sinoland-190414/). This is due in part to many ranking Chinese leaders who experienced firsthand the Great Leap Forward and Cultural Revolution, such as Xi, Premier Li Keqiang and previous President Hu Jintao, among many others.

Who and how history is interpreted matters a great deal. For example, in many US states, science textbooks have expunged Charles Darwin and evolution, due to fundamentalist Christian orthodoxy. Thus, it meant a lot when in 2018, China’s history textbooks stopped calling the Cultural Revolution a “mistake”.

It is worth repeating the news release, which I edited for clarity below (http://chinascope.org/archives/16136),

In the new edition of eighth grade Chinese history textbooks that the government owned People’s Education Press publishes, the word “erroneously” disappeared from the description of the 1966 – 1976 Great Cultural Revolution that Mao Zedong launched.

Chinese netizens were the first who mentioned this particular revision in the new textbook. In the old edition, the relevant part read:

“In the 1960s, Mao Zedong erroneously believed that there was Revisionism in the Party’s Central Committee and that the Party and the country were facing the danger of capitalist restoration. In order to prevent the restoration of capitalism, he decided to launch the ‘Cultural Revolution.’”

In the new textbook, the wording became:

“In the mid-1960s, Mao Zedong believed that the Party and the country were facing the danger of capitalist restoration. To this end, he emphasized ‘taking class struggle as the key’ and trying to prevent it by launching the ‘Cultural Revolution.’ In the summer of 1966, the ‘Cultural Revolution’ was in full play… the Cultural Revolution and Great Leap Forward were periods of “arduous exploration”… Although Mao Zedong made serious mistakes in his later years, his lifetime “achievements to the Chinese revolution far outweigh his mistakes” and “achievements are the first, mistakes are the second”. Seven points of merit, 3 fault points (especially later in life).

Some Chinese netizens commented that, “Looking back from the late 2010s, Mao Zedong became a great leader who made no mistakes.”

Now it seems there are factions vying in the Ministry of Education about what the Mao Era means to the Chinese people today. (https://www.scmp.com/comment/opinion/article/3101234/clarity-welcome-cultural-revolution). The latest first-year history book for high school (16-year-olds) reverted back to similar pre-2018 language.

So, I asked two esteemed Chinese professors, who both grew up during the Great Leap Forward and Cultural Revolution, what they thought. In fact, I have read the books by Dongping Han and Mobo Gao, and interviewed them as well (http://chinarising.puntopress.com/2016/11/09/son-of-the-revolution-dongping-han-on-growing-up-during-chinas-great-leap-forward-and-cultural-revolution-china-rising-radio-sinoland-161110/ and http://chinarising.puntopress.com/2017/03/30/from-poor-peasant-to-phd-professor-mobo-gaos-revolutionary-upbringing-during-chinas-mao-era/). You really should take a look, because they were there, in poor, rural Chinese villages during the 1950s-1970s. As they both said, without the Cultural Revolution, neither of them would have ever had a chance to go to university and eventually become college professors overseas.

I showed them all of the above news and here are their replies, 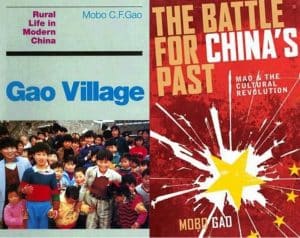 Thank you for your message and for getting some attention to my work. That is fantastic!

Yes, I witnessed the latest development of the verdict of the Cultural Revolution (CR) with great interest.

The official “verdict” of the CR is controversial because it is not only about China’s past, but also today and even future. First of all, it is about contrasting political positions between the 99% versus the 1%.  On the one hand there is undeniable evidence that there was socio-economic progress for the 99% during the CR. For instance, the health care and education improved dramatically for the vast majority of the Chinese rural. By early 1970s China’s economy was a healthy road of development. On the other hand, the political and intellectual elite of the 1% were the Cultural Revolution targets, emotionally for most and physically for some. They were the targets because the CR was meant to be both cultural and revolutionary. In “Constructing China” I have two chapters to develop this theme. It was cultural because it was meant to change cultural values and mentality and it was revolutionary because it was meant to be against all the odds of global capitalism. In post-Mao China the Chinese political and intellectual elite had the resources and epistemological right to give the CR their verdict. Any discussion of the CR had been banned except constructed memoires, biographies and stories such as Zhang Zhixin to condemn the CR. The 99% did not have the resources nor the platform to put forward their verdict of the CR until in recent years when social media came along to give them some resources.

When Xi declared that one should not use the second 30 years of the PRC to deny the achievements of the first 30 years, he was trying to tip the balance a little. The reason why Xi wanted some balance on the official verdict of the CR had less to do with personal or family history but more to do with what he believed the road China should take for its future. Xi wanted to retain some socialist legacies for the next phase of China’s development. But the latest development may indicate either that Xi finds the anti-socialist resistance too hard to push or that he has come along with the capitalist approach, which is the easiest and most convenient, since it is almost a default position for everyone: consumerism and greed.

Please do get back to me if I can be of any use for your worthwhile work.

Why the upper class hated the Cultural Revolution

In 2016, at an international conference to mark the 120th anniversary of Chairman Mao’s birthday at Xiangtan University, I was supposed to be the eighth and last person to speak on the stage following the opening ceremony.   Each person was given twenty minutes, but the seventh person, a female professor from Beijing University, whom I never met before, said that she would give up her twenty minutes to me so that I could talk longer.   She said that she heard my comments about the July 5 riots in Xinjiang, in 2009 at a small group discussion, and was very impressed.   I felt so honored because something like this never happened in my academic career before.

I started my speech with the comment that someone before me talked about Chairman Mao’s mistakes in his late life, particularly during the Cultural Revolution years.   We live in class societies, and a nation state world.  Different classes and different nations see things very differently.   In the eyes of the Chinese working classes, Chairman Mao was never wrong.   All the policies and decisions were made with the best interest of the people in mind.  That is why they are more and more fond of Chairman Mao’s memories today. But in the eyes of Jiang Jieshi’s reactionary government (Chiang Kai-Shek/KMT) and the foreign imperialists, Chairman Mao was never right.  That is why they hated him so much, even more today.

I then went on to speak about the accomplishments of the Cultural Revolution. My speech was interrupted by standing applauses of over three thousand students and professors in the audience several times. I said that the Cultural Revolution was the best time for Chinese working class people in Chinese history. They enjoyed social justice and the right to criticise the leaders, like never before. The Chinese society was the best in history. There were no corrupt officials, no criminal gangs, no drugs, no trafficking of women and children, no prostitutes, no homelessness. People enjoyed free medical care and free education. People’s life expectancy increased to 69 years, more than doubled, 19 years more than that of India, an accomplishment unprecedented in human history.

Another very important thing happened at the meeting. My forty minutes was soon over, but the chairman who presided over the meeting told me that I did not need to worry about time, and I could speak as long as I wanted. That was again something that never happened before in my lifetime. I was able to speak for eighty minutes, and never lost my audience.

After my speech, many professors and students came up to take a photo with me, and asked me write something on their notebooks. I felt so honored. One of my American colleagues was shocked to see that people responded to my speech with such great enthusiasm. A Chinese professor commented to me that I became mainstream today, because the people applauded for me. Without it, they would not have allowed me to speak like that.

People will see more and more clearly that the CR was progress, the greatest progress in human history ever. Nobody will be able to fool the Chinese people any more on this.

Enough said? They are both straight from the Mao Era horse’s mouth!

2 thoughts on “The fight for China’s communist-socialist soul rages on in its textbooks and on all its social media. China Rising Radio Sinoland 201102”