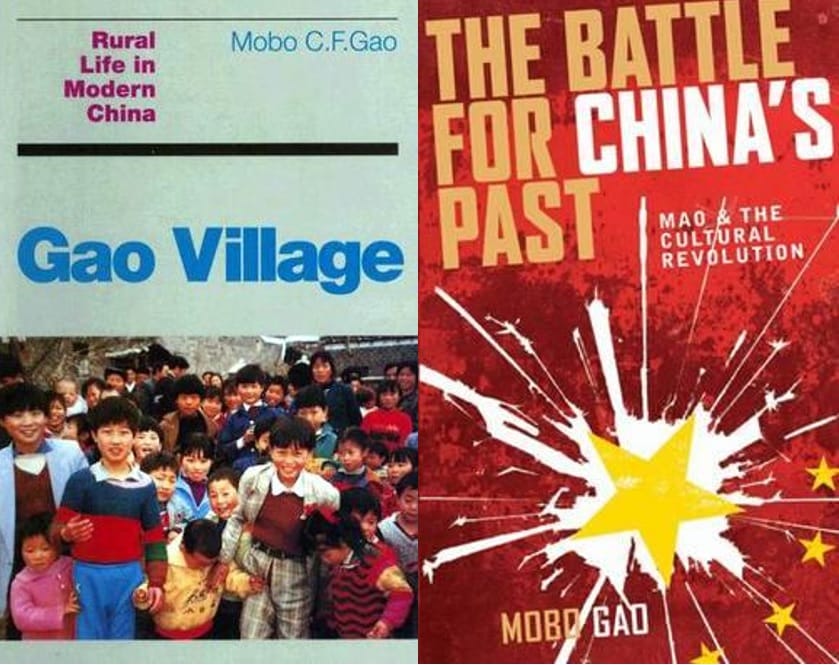 Pictured above: covers of Mobo Gao’s two books on the Mao Era.

Most Westerners take for granted the privileged, middle class upbringing they have had. Pretty cushy for starters, compared to the 30,000 children who, to this day, die every 24-hour news cycle, due to a lack of clean water, shelter, medical care and adequate nutrition, often caused by Eurangloland’s incessant wars and imperial domination of Planet Earth. For the more than three billion fellow humans who live on less than $2.50 per day https://www.dosomething.org/us/facts/11-facts-about-global-poverty, including 1.5 million households and 3 million children in the United States http://www.alternet.org/economy/number-americans-living-less-2-day-skyrocketing, we all represent their one-percent class.

Mobo Gao had clean water, shelter, medical care and adequate nutrition, growing up in revolutionary China, during the 1950s-1970s. But he still lived through an upbringing that few Westerners can imagine, because he was dirt poor and isolated in a rural Chinese village, far from urban comfort. He never starved, but was eternally hungry.

Ninety-nine percent of the books Westerners read about the Mao Era are written by “Scar Literature” authors. There is big money in penning books that portray New China in the worst possible light. Facts and credible research often don’t matter, but here’s a cool million if you’ll write us a sordid, sensational screed about how awful and depraved the communist revolution was, 1949-1978. “We need a rewrite. Your script is is not terrifying, bloody and shocking enough”!

Mobo Gao grew up and lived during the heyday of New China’s rapid development and social change, including the much sensationalized Great Leap Forward, 1959-1961 and the Cultural Revolution, 1966-1976. Unlike the money grubbing scar literature writers, Mobo’s two books are cool, calm, collected and fact-filled, backed up with tons of statistics and real life experiences in rural, communist China – the good and the bad.

Join China Rising Radio Sinoland host Jeff J. Brown, as he spends a wonderful interview with a man who really lived Mao’s Era, from the ground up – Mobo Gao.

Mobo’s interview makes for a wonderful bookend with another guest Jeff had on his show recently. Dongping Han also grew up during revolutionary China and has some fascinating stories to tell, as well. Their two interviews are quite different, so both make for valuable and informative listening.

Postscript: readers wrote asking me what happened to Gao Village, since Mobo’s book was written. He was kind enough to reply, as an addendum to the interview:

The Gao Village book leaves off in 1997 actually (the book appeared in 1999) and I have written a sequel and MS is under review by the publisher.

There are too many things to talk about in a paragraph. I will just list a few points: