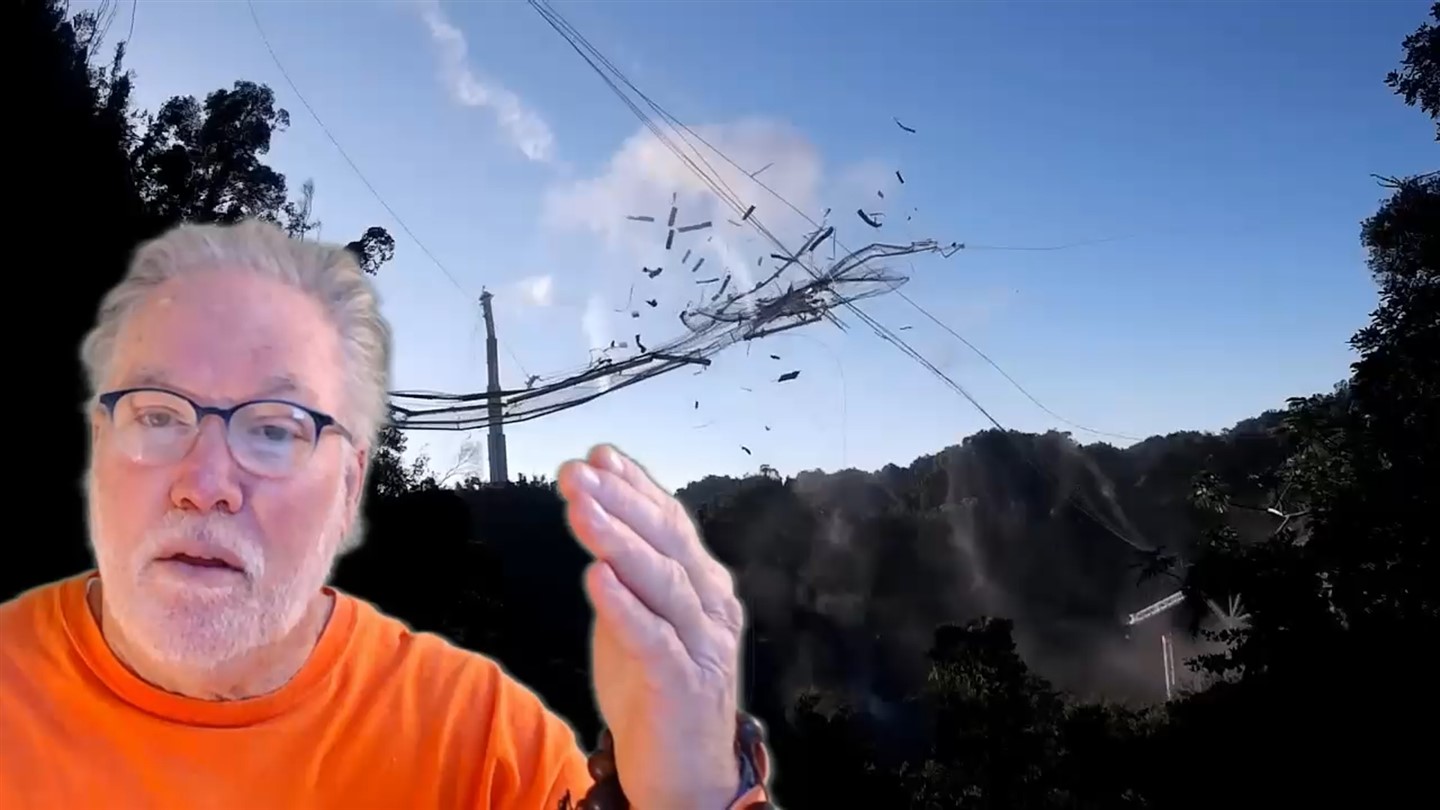 Pictured above: I’m reporting on the predicted and preventable collapse of one of the USA’s greatest postwar scientific achievements – the Arecibo Observatory in Puerto Rico late last year. Talk about an allegory. Westerners are not paying attention, this to their peril and ruin.


It is sad to see how the West is collapsing. It is the end of empire. Eurangloland (NATO, Europe, Australia, New Zealand and Israel) may implode or start World War III tomorrow, in a last-ditch paroxysm to survive, nevertheless the trend is inevitable.

A not-too-distant generation will write a similar epitaph as this one, for the West,

Rome lived upon its principal till ruin stared it in the face. Industry is the only true source of wealth, and there was no industry in Rome. By day the Ostia Road was crowded with carts and muleteers, carrying to the great city the silks and spices of the East, the marble of Asia Minor, the timber of the Atlas, the grain of Africa and Egypt; and the carts brought out nothing but loads of dung. That was their return cargo.

Eurangloland’s carnival barking, three-ring circus Vaudeville democracy (https://chinarising.puntopress.com/2020/10/11/wests-carnival-barking-three-ring-circus-vaudeville-democracy-cant-steep-low-enough-in-the-usa-presidential-elections-this-versus-millennial-chinese-communist/) continues to embarrass itself, and its neoliberal austerity on the 99% continues to lower standards of living, expectations, with a commiserate and accelerating decline in infrastructure.

Uncle Sam knew for three years that the Arecibo radio dish telescope in Puerto Rico could be fixed to prevent its collapse, and let it implode (https://chinarising.puntopress.com/2020/12/14/end-of-year-reflections-on-china-versus-usa-west-using-high-tech-as-a-metaphor-no-text-just-ad-lib-observations-straight-from-the-heart-a-combo-china-rising-radio-sinoland-china-tech-news-flash/). Talk about a modern-day allegory. Not to worry, China has built one bigger and better, the Five-hundred-meter Aperture Spherical Telescope (FAST – https://en.wikipedia.org/wiki/Five-hundred-meter_Aperture_Spherical_Telescope).

US bridges are falling down. Here are the ten most deadly ones in the last 50 years (https://edition.cnn.com/2018/03/15/us/bridge-collapse-history-trnd/index.html). Even foot bridges are going down (https://edition.cnn.com/2018/03/15/us/miami-bridge-collapse/index.html). There are 45,000 other death traps just like them, waiting to kill many more innocents. With them taking on 171.5 million crossings a day, you can bet on many more tragedies. (https://www.statista.com/chart/12737/thousands-of-american-bridges-are-falling-apart/).

USA buildings collapsing? There are 24 pages of them on Wikipedia (https://en.wikipedia.org/wiki/Category:Building_collapses_in_the_United_States), although we can remove the Oklahoma City Federal Building Bombing false flag (https://chinarising.puntopress.com/2021/04/19/never-forget-the-us-governments-bloody-terrorism-in-oklahoma-city-26-years-ago-today-its-where-todays-headlines-began-china-rising-radio-sinoland-210419/) and the 9/11 false flag, so make that 22.

No, make that 23, there was a building collapse in Miami this summer, where almost 100 innocents died (https://www.9news.com.au/world/miami-building-collapse-major-emergency-response-surfside-florida/5b4adee1-cdbb-4551-99d5-bd28b5be0b02).

Energy grids? In this 2014 database, over 1,600 power outages were reported in the 15 previous years, across the United States (http://insideenergy.org/2014/08/18/data-explore-15-years-of-power-outages/). The year 2020’s list is long (https://www.eia.gov/electricity/monthly/epm_table_grapher.php?t=table_b_2) and there are already pages of them in 2021 (https://www.eia.gov/electricity/monthly/epm_table_grapher.php?t=epmt_b_1).

Look at the numbers of customers affected and the lengths of time. Together, just in the last 21 months, millions of Americans went without electricity for hundreds of hours. Some of it due is to severe weather, but it is widely accepted that the US energy grid is not being upgraded and winterized adequately. This was already well known in 2013 that it was decades-old problem (https://www.scientificamerican.com/article/us-electrical-grid-on-failure/).

And, how can we forget last year’s winter fiasco, when millions of Americans went without electricity and water for days. Hundreds of people died, while seeing their utility bills skyrocket (https://www.texasstandard.org/stories/nearly-200-people-died-in-februarys-winter-storm-double-the-states-initial-estimate/ and (https://weather.com/news/news/2021-02-19-utility-bills-increase-winter-storms-texas). This, because US energy suppliers prefer profits over updating their grids, so make the 99% pay. It’s the capitalist way.

There is much, much more. Uber-establishment Business Insider doesn’t hide the truth, as they give a damning report of all the infrastructure sectors (https://www.businessinsider.in/finance/us-infrastructure-is-falling-apart-heres-a-look-at-how-terrible-things-have-become/slidelist/59182296.cms#slideid=59182278).

Meanwhile, back in Sinoland, the Chinese people are leaving the West in infrastructure-and-technology dust, something I’ve reported on extensively over the years (https://chinarising.puntopress.com/2021/09/21/i-cant-keep-up-baba-beijing-and-the-chinese-nation-are-so-unstoppably-prolific-with-high-tech-innovation-invention-infrastructure-space-and-military-that-ive-created-a-hyperlink-library-gr/), and now maintaining an online database to keep up. I can speak from experience too. Going from China back to the USA is akin to leaping from modern, updated infrastructure and telecommunications, to a crumbling second world country.

It’s shameful, but that’s the difference between communist-socialist-anti-imperialist (CSAI) countries and global capitalism. Trump’s hoped for $1.5 trillion infrastructure program was dead in the water, since he was expecting the private sector to fund half. Capitalists have reptile brains and can’t think beyond next quarter’s profits and stock options. Infrastructure is a low margin, long-term investment that reaps mostly secondary and tertiary socioeconomic rewards – in other words, for the benefit of the 99%. Ditto Biden’s much anticipated infrastructure bill. Lizard brains want double digit profits, period, and infrastructure can rarely offer that.

There are many other signs of Western decline, especially frontrunner USA, nonetheless I’ll add one more: longevity.

The United States is seeing a rapid drop in life-expectancy. (https://www.livescience.com/us-life-expectancy-decline-2020-covid-19.html) This decline has been going on for four years now, a sure sign of socio-economic cancer (https://www.presstv.ir/Detail/2021/06/24/660802/Study–Big-drop-in-life-expectancy-for-Blacks,-Hispanics-in-US-).

China’s life expectancy continues to climb and is now the same as US’s, 77.3 years.

The USA is in the lead, but the rest of the West is hot on its imperial heels. I know, because I’m living in France and watching Europe slowing cannibalize the wonderful socialism for the 99% it had for 50 years after World War II. It’s like an acid drip. We are being austeritized by the global capitalist trillionaire dictatorship, only 20 years behind the States.

So, break out the popcorn and your favorite fizzy drink, to watch the spectacle of Eurangloland’s collapsing empire on one screen, and then on the screen next to it, the dazzling spectacle of communist-socialist China rocketing into the 22nd century (https://chinarising.puntopress.com/search/?q=technology%20infrastructure%20innovation%20invention).

3 thoughts on “The USA is falling apart at the seams and nobody seems to care. The rest of Eurangloland is hot on its collapsing heels. This while the Chinese Nation is a speeding infrastructure-and-technology bullet racing into the 22nd century. China Rising Radio Sinoland 210924”