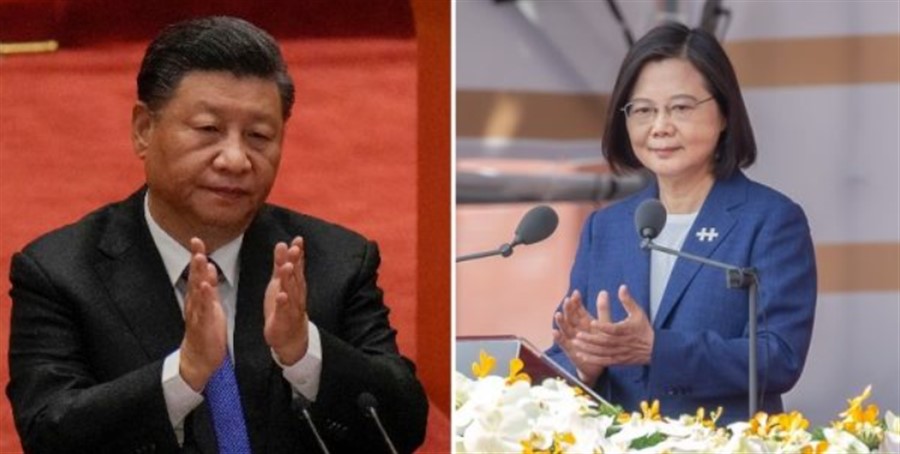 Pictured above: left, China’s president Xi Jinping and on the right, Taiwan’s leader Tsai Ing-Wen. It is like comparing a tiger to a fly. Mark my word, just like Hong Kong and Macau, Taiwan will be reunited with the Motherland – hell or high water, peacefully or by force.


China Rising Radio Sinoland · Taiwan Will Be Peacefully Reunited With The Motherland. War Is Unnecessary. Here’s How It’ll Happen

Very few Westerners know that Taiwan’s economy is totally dependent on the Mainland. Nor do they know that five percent of the island’s total population lives and works there. These one million “Chinese expats” are not waiting tables and delivering food on motorcycles (https://www.abc.net.au/news/2016-01-14/nearly-one-million-expatriate-taiwanese-in-china-to-forgo-vote/7089800). They are more likely businesspeople, factory owners/mangers or heading up service companies, import-export to and from the island, etc. There are thousands of Taiwanese factories and businesses on the Mainland, representing billions of dollars.

As a result, Taiwan’s economy is attached at the Sino-hip with the Mainland, unlike any other country in the world, be it Japan, Korea or the United States.

In fact, some statistics place the number of Taiwanese on the Mainland at two million citizens (https://www.quora.com/2-million-Taiwanese-work-and-live-in-China-How-do-they-feel-about-living-in-mainland-China-the-enemy-of-Taiwan). Either way, for an island with only 23 million people, 1-2 million expats 2,000km across the straits is huge.

Taiwanese need a special resident card to live and work on the Mainland, called the Taiwan Compatriot Permit. It is essentially an identity card for Taiwanese to stay without time limits there. These permits are highly valued in Taiwan and are like commercial gold dust to them. The heartbeat of their success resides as much in Shanghai, Shenzhen and Beijing, as Taipei, Taiwan, maybe even more so, since like much of the rest of the world, Taiwanese use the Mainland as their manufacturing, logistics and distribution hub for international trade, not to mention financing billions of dollars with mainland banks and stock exchanges. Another incentive is Taiwan’s infrastructure is at least a generation behind the Mainland.

Baba Beijing has been talking a lot in the media that Taiwan will be peacefully reunited with the Motherland, and that a military invasion is not necessary. How can this happen, with Western empire doing everything possible to frustrate this stated goal before 2049, the 100th anniversary of the People’s Republic of China’s communist-socialist liberation in 1949?

A sure-fired, peaceful recipe for Baba Beijing to bring China’s errant province of Taiwan back to the homeland is quite simple: suspend 10,000-20,000 high-level Taiwan Compatriot Permits. It would be a death knell for the island’s economy and bring it to its knees. Imagine all those Taiwanese businesspeople flooding home suddenly, their daily management and control over their many thousands of factories and billions of dollars in mainland investments and infrastructure gone. It would be total chaos for Taiwan, but not for the Mainland, as Taiwan is one of the smaller Chinese provinces, ranking between sparsely populated Inner Mongolia and Xinjiang (https://www.worldatlas.com/articles/chinese-provinces-by-population.html). In nominal GDP terms, Taiwan (https://knoema.com/atlas/Taiwan-Province-of-China/GDP#) would rank #8 among all the provinces, between Sichuan and Fujian (https://en.wikipedia.org/wiki/List_of_Chinese_administrative_divisions_by_GDP). Again, it would be an inconvenience for Baba Beijing, like a serious earthquake or typhoon on the Mainland, which they are used to. Yet, it would be for sure Freak-Out City for Taiwan.

So, go ahead Uncle Sam, bump your nuclear submarines into South China Sea underwater objects, like last week (https://rvpgmedia.com/2021/10/08/china-demands-answers-as-us-nuclear-submarine-suffers-damage-in-south-china-sea-world-news/) and get caught illegally breaking international treaties by secretly training the Taiwanese military for the last year (https://thehill.com/policy/defense/575759-us-troops-secretly-training-forces-in-taiwan-for-past-year-report). Washington and its vassals, like France can keep violating treaties by sending higher and higher level government officials to the island (https://newsflash.one/2020/08/04/us-sending-highest-rep-to-taiwan-since-1979-break-in-ties/ and https://www.rfi.fr/en/international/20211006-french-senate-delegation-arrives-in-taiwan-after-chinese-show-of-force). The aging US (and UK and French) navies can continue sailing its ships near China’s islands in the South China Sea, looking pathetically weak in the process (http://chinarising.puntopress.com/2015/06/02/south-china-sea-brouhaha-down-dirty-44-days-radio-sinoland-15-5-17-2/). And the US military can huff and puff all it wants that it will defend Taiwan in the event of a Mainland takeover (https://www.rt.com/op-ed/537062-us-defend-taiwan-china/), which is a laughable pipe dream.

This is all the sad spectacle of a dying Western empire (https://chinarising.puntopress.com/2021/09/24/the-usa-is-falling-apart-at-the-seams-and-nobody-seems-to-care-the-rest-of-eurangloland-is-hot-on-its-collapsing-heels-this-while-the-chinese-nation-is-a-speeding-infrastructure-and-technology-bulle/), with the USA in the lead, in the face of an unstoppable Chinese Nation, surging into the 22nd century (https://chinarising.puntopress.com/2021/09/21/i-cant-keep-up-baba-beijing-and-the-chinese-nation-are-so-unstoppably-prolific-with-high-tech-innovation-invention-infrastructure-space-and-military-that-ive-created-a-hyperlink-library-gr/). This hopeless imperial flailing and faux gorilla chest beating is pathetic, to be honest, and painful to watch.

3 thoughts on “Xi Jinping is announcing to the world that Taiwan will be peacefully reunited with the Motherland. War is unnecessary. Here is how Baba Beijing could likely succeed. China Rising Radio Sinoland 211016”