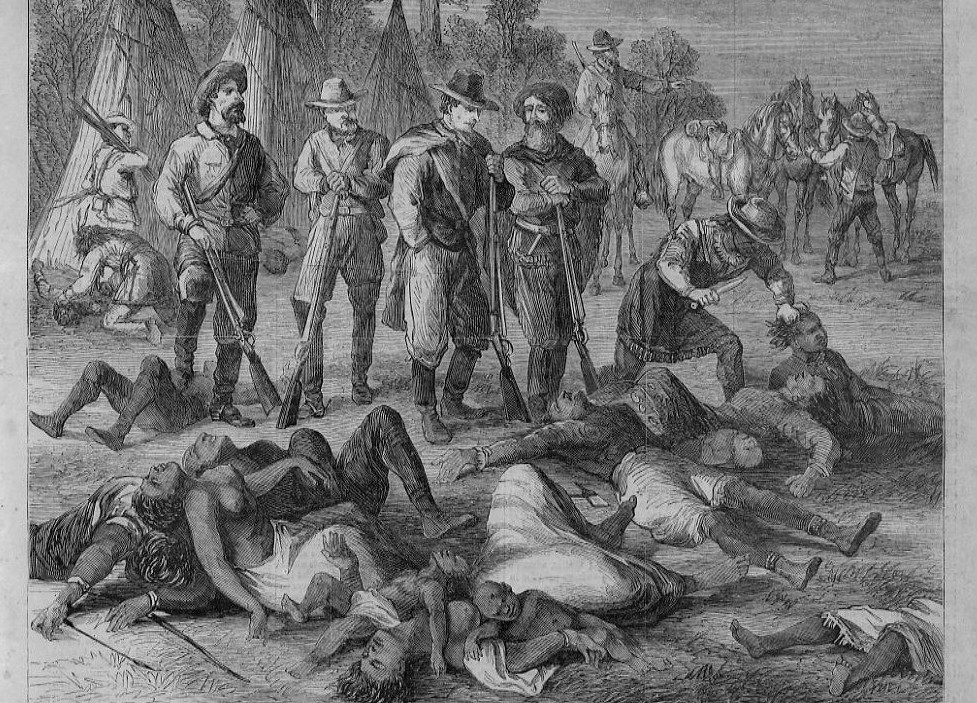 Pictured above: European/American colonial settlers coolly and calmly slitting the throats of Native American women and children. No other race of people, outside Europeans, can even come close to the billion or more they have exterminated over the last 500 years, and still are.

China Rising Radio Sinoland · Most Western Countries Say NO To Support Fighting Racism And Xenophobia. Are You Surprised? I’m Not

Thanks to my good friend and comrade Wei Ling Chua (https://www.amazon.com/Wei-Ling-Chua/e/B00G3SWQZ0), who sent this to our China Writers’ Group. Sometimes it takes details to really see what happens on the world stage. It also brought up many memories of all I have written about this subject (https://chinarising.puntopress.com/2018/06/30/praise-for-the-china-trilogy-the-votes-are-in-it-r-o-c-k-s-what-are-you-waiting-for/).

On 31 December 2020, the United Nations General Assembly, meaning all 193 world countries were invited to vote on a proclamation (https://digitallibrary.un.org/record/3896183).

The proclamation was very short,

A global call for concrete action for the elimination of racism, racial discrimination, xenophobia and related intolerance and the comprehensive implementation of and follow-up to the Durban Declaration and Programme of Action.

The resolution was adopted by the General Assembly by a vote of,

Wow! Fourteen countries came out publicly in support of racism, racial discrimination, xenophobia and related intolerance. Which countries were these? From A to Z,

Eleven of the 14 “no” votes are in Eurangloland (NATO, Europe, Australia, New Zealand and Israel). The others, DRC, Guyana, Marshall Islands and Nauru all have one common feature: they are geopolitical and resource whores for Eurangloland.

Abstentions are weasel votes to supposedly remain neutral and if organized, to hopefully keep a resolution from passing. It didn’t work this time, nevertheless, interestingly, out of the 44 abstentions, the majority of them are the remaining Western countries. The 29 non-voting countries are mostly small and poor.

What is the resolution’s Durban Declaration and Programme of Action?

Durban Declaration and Programme of Action

This is an important milestone and offers an opportunity to reflect on progress made in efforts to eliminate racism, racial discrimination xenophobia and related intolerance, good practices and challenges with regard to the implementation of the Plan of Action.

The DDPA called for concrete actions by states and other actors related to people of African descent.

Ensuring access to education and to new technologies, in particular to women and children.

Inclusion of the history and contribution of Africans and people of African descent in the education curriculum.

Ask yourself: what do the people of Australia, Canada, Czechia, Democratic Republic of Congo (DRC), France, Germany, Guyana, Israel, Marshall Islands, Nauru, Netherlands, Slovenia, USA, UK have against these noble ideals? Why did the mostly 44 abstaining Western countries not vote “Yes”? If you are a citizen, do you agree with these “No” and “Abstention” votes?

Which countries did vote “Yes” to fight racism? Most of them are communist-socialist-anti-imperialist (CSAI), like China, Russia, Iran and DPRK/(North) Korea, which I call the Asian Quad. Throw in Pakistan and you’ve got the mighty PRICK. Others in the CSAI camp include Argentina, Belarus, Bolivia, Cuba, Ecuador, Laos, Malaysia, Nicaragua, Peru, Philippines, Syria, Thailand, Venezuela, Vietnam Yemen, among many others to round the 109 “Yes”.

If the decent thing to do is vote “Yes”, then what does that say about all the Western countries and their lackeys who voted “No” or abstained?

For the 109 countries who voted “Yes”, what kind of message does Eurangloland send to the rest of the world, about their hopes for the future and betterment of humankind?

Western empire is telling them “No” to have,

Ensuring access to education and to new technologies, in particular to women and children.

The Western trillionaire global capitalist dictatorship has no interest in working towards these win-win, mutually beneficial goals, because basic infrastructure and technology, education and environmental protection help the 99%; these kinds of investments don’t make double digit profits, so to hell with humanity.

Western racism against all the global “Others” can be seen nonstop since the Ancient Greeks. I’ve written a huge amount on it. If you have not read this exposé, you should do yourself a favor,

Slavs and the Yellow Peril are “niggers, brutes and beasts”, in the eyes of Western Empire. China Rising Radio Sinoland

Based on this, I later fleshed out a new term,

Which is used as a platform to read about here,

The United States’ new African strategy and its implications for China’s long-term cooperation and development on the Great Continent. China Rising Radio Sinoland 200720